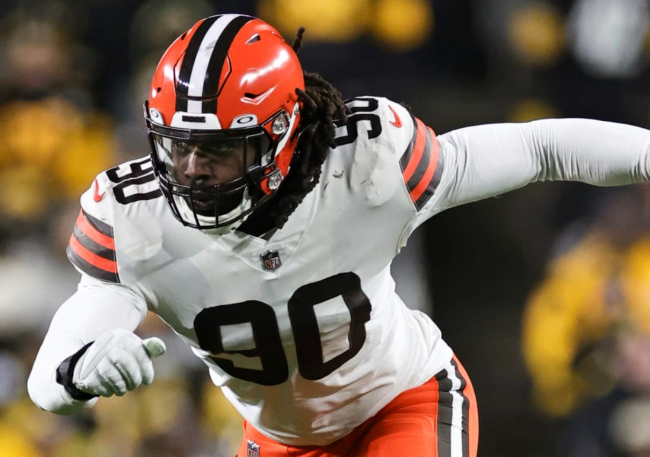 As the first overall selection in 2014, it was expected that Jadeveon Clowney would become a top NFL pass rusher. He never developed into the player that was projected, but he has turned into a good ‘No. 2,’ which is why he will remain with the Cleveland Browns this season.

This past season, with Myles Garrett as his teammate, Clowney had nine sacks in 14 starts. He is returning to Cleveland in 2022, getting paid more than $1 million for each of those 2021 sacks in a one-year deal that’s worth approximately $11 million, with incentives.

Clowney had just three sacks in 2019 with the Seahawks, and no sacks in 2020 with the Titans. However, in 2018, his final season in Houston, when J.J. Watt had 16 sacks for the Texans, Clowney had nine.

According to reports, Clowney was offered as much as $15 million per year for multiple seasons by several other suitors, but he wanted to stay with the Browns and Garrett.

While the NFL world waits to hear about the status of Deshaun Watson, Cleveland’s season win total is off the board.

Deshaun Watson May Meet with NFL a Second Time

Typically, an NFL investigation ends after a meeting with the player(s), then the league announces its verdict, handing down punishment, if warranted. So, last week the NFL spent three days talking with Watson regarding the 22 civil lawsuits pending against him, alleging sexual misconduct and assault.

There haven’t been any leaks about the NFL’s conversation with Watson. or any characterization of their questioning. Attorneys aren’t talking about Watson’s meeting with league investigators, other than to say, “Deshaun has and will continue to fully cooperate with the NFL.”

Ahead of its interview, “Real Sports” sent out a release that read, “Several women who have accused Deshaun Watson of sexual misconduct sit down for their first-ever national TV interview. In the report, they detail the alleged abuse they suffered, and share their reactions to Watson’s record-breaking, $230-million contract with the Cleveland Browns.”

The NFL owners are meeting in Atlanta. Even though Daniel Snyder isn’t there and the status as owner of the Washington Commanders isn’t officially on the agenda, he is a topic of discussion.

The tone of those talks is one of frustration, embarrassment and ultimately what the owners can do to finally rid themselves of Snyder.

“I think everybody’s getting tired of it,” said one owner to USA TODAY.

In the midst of an investigation by the Federal Trade Commission, and his removal from day-to-day control of the team after details of sexual harassment emerged a year ago, Snyder denies any wrongdoing in the latest probe. According to the other owners, if Snyder is lying, this could be his final act.

The probe is looking into allegations that Snyder used two separate accounting systems in order to hide money from the NFL, giving less money to the other owners in the league. A different league owner, also talking to USA TODAY, said, “If that happened, I think that’s the nail in the coffin, ultimately.”

Yet a third owner, also requesting anonymity, said that the anti-Snyder sentiment among ownership is as high as it’s ever been.

“We were counting votes,” said the owner, in reference to the 24 votes (of the 32 owners) it would take to force Snyder to sell the Commanders. This session, as was being reported, took place in March and did include commissioner Roger Goodell.

Regarding the on-field performance of his team, Washington’s over-under in 2022 regular-season wins stands at eight, at least according to NFL odds.

The last owner who was forced to see his team was Jerry Richardson of the Carolina Panthers. It was revealed he had paid a settlement to at least four employees over using inappropriate language at work, directing racial slurs at a black scout.