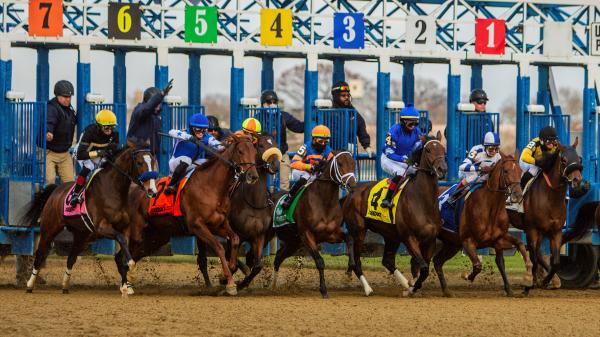 After the Breeders’ Cup blowout of last weekend, the stakes landscape around the country is very quiet this week. Let’s turn our attention to Aqueduct, which is hosting a nine-race card on Saturday that includes some good wagering possibilities. The focus here will be on the late daily double in the last two races on the card, as well as some exacta and trifecta possibilities in those races. Enjoy Saturday and best of luck!

Saturday’s featured race at Aqueduct is this $62,500 allowance optional claiming race at the extended distance of 1 3/16 miles that has drawn a quality field of horses that are all very good on their best days. The question here is, which one is due for one of their best days and which ones aren’t? The horse with the best recent form in this spot probably is the horse to beat, and that horse is #6 Unbridled Bomber (2-1), who liked the Aqueduct two-turn layout last time out and closed from last to first to win big with a strong speed figure. If he can repeat that kind of effort, he’ll be tough to beat, and it’s encouraging that the low-profile barn of James Ryerson has attracted Irad Ortiz Jr. to ride, which certainly makes it appear that another good effort is on the way today. There’s not a lot of speed entered in this race, and that means that #2 Senior Investment (6-1) may be in a position to inherit the lead in this race, and if he’s allowed to control the pace he could hold on until the stretch. The Linda Rice-trained #4 Two Thirty Five (5-2) is a true distance horse who won as recently as two starts back, and he also should be forwardly-placed. #5 Rough Sea (3-1) from the barn of Bruno Tessore is another true distance horse that has won two of his last four and would be dangerous with a repeat of some of his best outings.

The afternoon at Aqueduct ends with this New York-bred maiden claiming sprint going six furlongs. The standout in the 10-horse field appears to be #10 Gracefully Wild (3-1), who will be making her second start back from nearly a four-month layoff after needing the race last time and finishing fourth against open company. Back at the same claiming tag today, Gracefully Wild is actually taking a class drop now that she’s in versus state-bred competition. She showed ability earlier this year on both turf and dirt and should go a lot faster and a lot further than last time in this second race off the layoff. Manny Franco picks up the mount. If you are looking to play some exactas here in the nightcap, you can also use #8 Bern Rosey Bern (4-1), who ran a promising race last time when switched from turf to dirt at seven furlongs. Today’s six furlongs might actually suit her better.

The Play:  The key horse for race 9 in the daily double you started in race 8 is #10 Gracefully Wild. You can also box Gracefully Wild in the exactas with #8 Bern Rosey Bern.