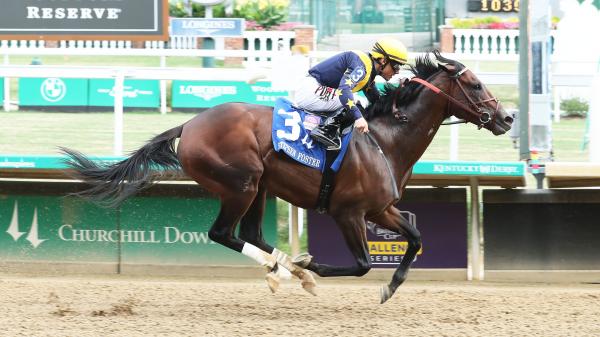 As assistant trainer Kenny McCarthy noted July 2, Hall of Fame trainer Bill Mott knows something about win streaks, having trained dual Horse of the Year Cigar to 16 consecutive victories. Now he’s got another classy stakes horse racking up the wins, albeit a mini streak next to Cigar’s achievement.

That horse is Olympiad, who improved to 5-for-5 in 2022 in putting away speed horses Caddo River and Mandaloun and comfortably repelling a stretch bid from Americanrevolution to win the $750,000 Grade 2 Stephen Foster Stakes Saturday at Churchill Downs.

The victory in the Foster, a Breeders’ Cup Challenge race, earned the 4-year-old son of Speightstown a paid, automatic berth in the Nov. 5 Grade 1 Longines Breeders’ Cup Classic at Keeneland.

Olympiad, who pressed fractions of :23.05, :46.45, and 1:10.64 early between pacesetting Caddo River and 2021 Grade 1 Kentucky Derby Presented by Woodford Reserve winner Mandaloun early, surged to the lead at the head of the lane in the 1 1/8-mile race. He opened up a 2 1/2-length lead in midstretch over rallying stalker Americanrevolution, who could only cut into the margin by a tiny bit late, 2 1/4 lengths behind the winner at the finish.

Olympiad gave Mott his second Foster victory after he first took the race with Ron the Greek in 2012.

“Bill Mott likes to have horses on win streaks, like Cigar,” said McCarthy, who oversees Mott’s Kentucky stable. “This horse has started one of his own and he’s been such a pleasure every time he’s run in our care in Kentucky. The whole team did a great job to get him back here and it’s very special to win the Stephen Foster again. He has such a big stride and it’s so powerful in the late stages of his races.”

Olympiad raced 1 1/8 miles in 1:47.66, less than two-fifths off Victory Gallop’s track record in the Foster in the 1999 Foster. He paid $5 to win as the slight favorite over Mandaloun.

“This horse has such a big stride on him and really extends it late in races,” said winning jockey Junior Alvarado. “I think as he’s gotten older he’s gotten faster in each start. Today we sat in a good position just off of the early pace and he showed how powerful his stride can be. I asked him just a little bit in the final furlong and he continued to get faster. He’s a great horse and has shown his talent all year long. It will be a fun rest of the year.”

Proxy rallied to grab third, 2 3/4 lengths behind the runner-up and four lengths ahead of a comebacking Mandaloun, who on Saturday made his first start since a ninth-place finish in the Group 1 Saudi Cup Feb. 26.

Title Ready, Caddo River, and Last Samurai completed the order of finish in the seven-horse field.

Brad Cox, who saddled Mandaloun and Caddo River, was disappointed with the outcome. He had been encouraged by Mandaloun’s training leading toward the Foster, and Caddo River had won three in a row before the race.

“Mandaloun was obviously under pressure, in chase mode early on. Just going too fast, but look, the winner was right there and was by far the best horse,” he said. “It might have cost us a placing or two, kind of chasing the way we were with Mandaloun.

“Caddo River, I expected him to be where he was. Not ready for grade 2s—bottom line.”

“He ran his race, the winner just kept going,” jockey Luis Saez said of his mount’s Stephen Foster race. “I thought for a second we were going to get there, but (Olympiad) just kept going.”

Olympiad, who began the week ranked No. 5 on the National Thoroughbred Racing Association Top Thoroughbred Poll behind Flightline, Country Grammer, Life Is Good and Jackie’s Warrior, hasn’t lost since finishing fourth to Americanrevolution in the Cigar Mile in December. He began the year with an allowance optional claiming win at Gulfstream Park. Then, he added the Grade 3 Mineshaft Stakes and the Grade 2 New Orleans Classic at Fair Grounds Race Course & Slots, and Grade 2 Alysheba Stakes Presented by Sentient Jet at Churchill.

“I thought it was a very game win this afternoon,” Mott said via telephone. “There were some nice horses in this field and I thought he did things rather easily. It was really nice to see him win like that.”

In pursuit of a top-level victory, Olympiad’s next stakes attempt is likely to come in the Aug. 6 Grade 1 Whitney Stakes at Saratoga Race Course, said co-owner Robert Clay of Grandview Equine. Life Is Good is another candidate for that race.

Olympiad is co-owned by Everett Dobson’s Cheyenne Stables, and Larry, Nancy, and Jaime Roth’s LNJ Foxwoods. Dobson and Larry Roth were in attendance for the Foster alongside Clay and other supporters.

“The horse, the jockey, and the trainer—they’re the ones that deserve all the credit. We just watch. We pay the bills,” said Roth. “We are nervous before the race, but we know we have a superb horse there. We’re looking forward to his next race and then the Breeders’ Cup.”

“It’s great to win with good friends, and that’s what we are. We’ve had a great ride with this horse,” added Dobson. “We can’t wait to get to Keeneland in a few weeks, a few months I guess for the Breeders’ Cup (Classic), and hopefully we’ll have some fun between now and then, but it’s great to do it with friends.”

The filly that Brad Cox fondly refers to as an “overachiever” only added to her impressive list of achievements July 2 with a commanding 1 3/4-length victory in the $350,000 Grade 2 Fleur de Lis Stakes at Churchill Downs.

Winless in her previous two starts this year, Shedaresthedevil refuted the naysayers when she streaked past a stubborn Super Quick in deep stretch to garner the seventh graded stakes race of her career.

“(Super Quick) kind of got away from us down the backside so that was a little bit of a concern but our filly showed her class and experience today,” Cox said. “I’m happy to have her get back in the win column this year.”

After dropping the hammer at $5,000,000 at The November Sale, Fasig-Tipton’s marquee breeding stock sale, a decision was made by Flurry Racing Stables, Qatar Racing, and new part owner Mandy Pope to keep the daughter of Daredevil in training one more year with Cox. That choice appeared questionable when the now 5-year-old hadn’t regained the form that took her to grade 1 glory at 3 and 4. Despite the two losses, Cox was confident that Shedaresthedevil would rise to the occasion, especially following her narrow runner-up effort to Pauline’s Pearl in the May 7 Grade 1 La Troienne Stakes Presented by Signify Health.

“I think a lot of naysayers were thinking she lost a step but we certainly hadn’t seen it in her training plus the figure she ran in her last race was actually one of her better ones,” said Cox. “I have to give Mandy Pope credit on bringing her back because It’s rare to have a mare come back at age five because of her value in the breeding shed. It means a lot that we’re racing her at 5.”

Cox had his share of experience training an elite filly through successive top-level campaigns with two-time Breeders’ Cup Distaff winner Monomoy Girl. Like Sharedaresthdevil, Monomoy Girl captured the Longines Kentucky Oaks as a 3-year-old before continuing her brilliance for two additional seasons.

Facing a short field of 5 in the Fleur de Lis, Shedaresthedevil broke alertly under regular pilot Florent Geroux and stalked Grade 3 Allaire DuPont Stakes victress Super Quick behind a moderate tempo of :24.13 and :47.83. Although Super Quick was able to sneak away to a 3-length advantage at the half-mile, Shedaresthedevil took aim on the leader around the turn and hit full flight down the lane. Super Quick was 3 1/4 lengths clear of third place finisher Pauline’s Pearl at the wire. -Molly Rollins