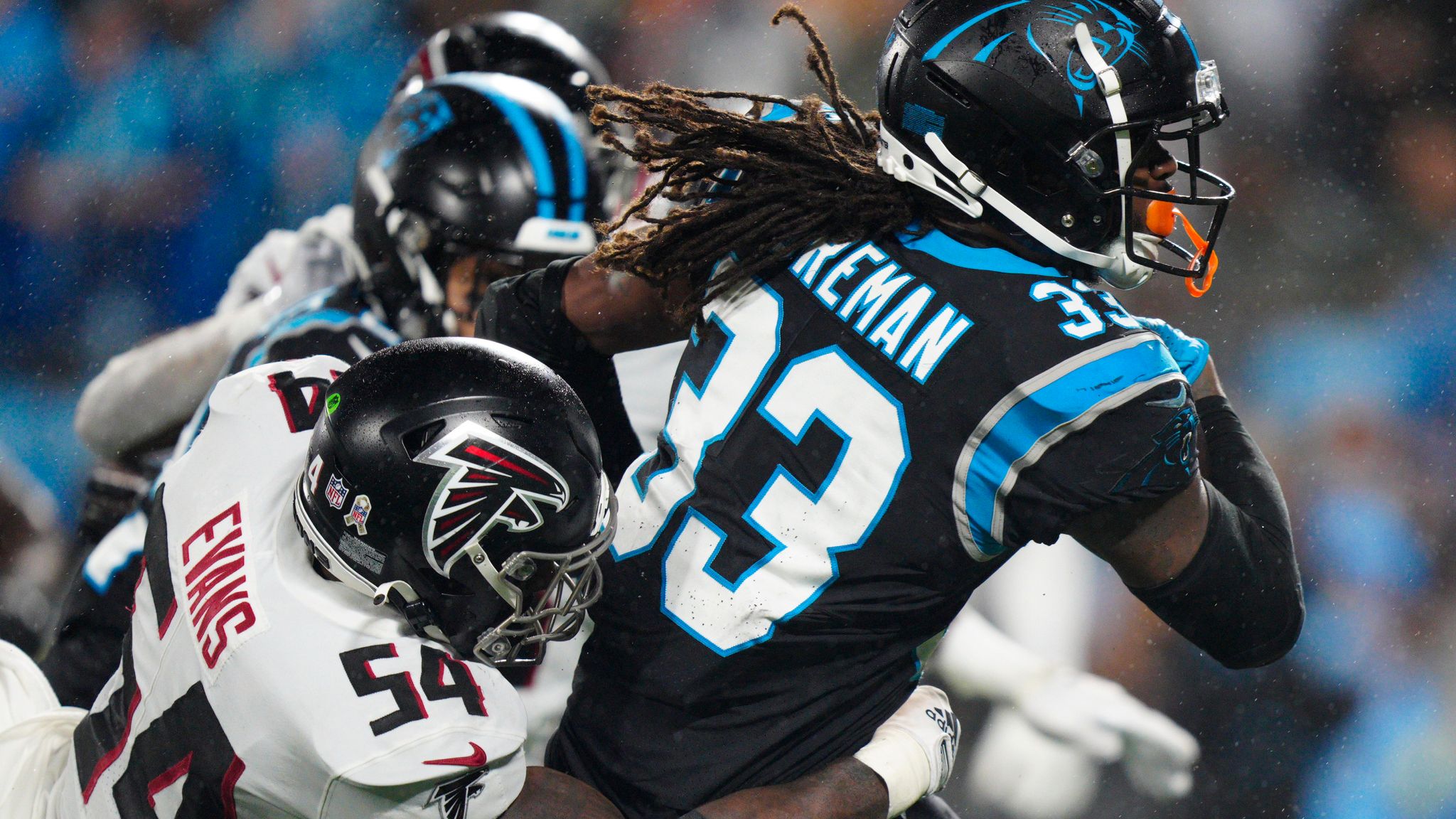 On a dark and stormy NFL night, the Carolina Panthers proved they are still relevant in the NFC South. As bad as the division has been, it is still winnable by a team that is 3-7 after Thursday night’s victory over the Atlanta Falcons.

Carolina Panthers D’onta Foreman runs for a TD with Atlanta Falcons back Rashaan Evans trying to pull him down. The Panthers beat the Falcons Thursday night, recovering from recent losses. (Image: Sky Sports)

The Panthers rushed for a season-high 232 yards, and Eddy Pineiro made four field goals. It was pure redemption 11 days after he missed two crucial attempts against the Falcons that ultimately led to a 37-34 loss in overtime.

Running back D’Onta Foreman had 31 carries for 130 yards and a touchdown and wide receiver Laviska Shenault scrambled 41 yards into the end zone to add seven more. With that, and Pineiro’s realigned foot, the Panthers took the 25-15 victory.

After playing the Panthers two weeks ago, Atlanta should have known Carolina would run the ball when Foreman ran for three TDs in that game. Perhaps they knew it, but didn’t care. The Panthers rushed for 232 yards Thursday and were ripped apart by the Atlanta defense.

A field goal by the Panthers and some flashes by QB PJ Walker were unremarkable in the attack of the first quarter. However, they moved the ball enough to take a 0-3 lead.

In the second quarter, the Panthers stepped on the accelerator. They led with a 41-yard rushing touchdown by Shenault, who easily disposed of the Falcons’ defense, and then with another Pineiro field goal.

Atlanta had barely shown signs of life until now. However, QB Marco Mariota’s best drive came just before halftime, and the Falcons went into the break with three points on the board.

When they returned, the Falcons resorted to running to unclog a very stalled offense, but also threw in some aerial plays to mix things up. It proved to be a good move for wide receiver KhaDarel Hodge. In his fifth NFL season and his 65th NFL game, he finally scored his first touchdown.

Throughout the second half, the two teams were evenly matched. The Panthers would get on the board and the Falcons would eventually respond.

Despite his best efforts, Walker was relatively tame, only putting up 108 yards. He threw a couple of solids dimes, but it was the ground game – and the Carolina defense – that controlled the field.

Still, the miscommunication between Mariota and Kyle Pitts continued Thursday. Mariota connected with him on the second play of the game, but didn’t find his tight end again until late in the fourth quarter. Questionable pass attempts and interceptions are going to haunt him for weeks.

Atlanta fell to 4-6, giving the Tampa Bay Buccaneers sole lead of the NFC South. Tom Brady and his Bucs meet the Seattle Seahawks in Munich, Germany, this Sunday after ending their three-game losing streak last week.

Carolina is making adjustments, improving to 2-3 since its head office fired head coach Matt Rhule. Steve Wilks has taken over as interim head coach, and is turning things around.

The Panthers have the best record in the division (3-1), but their remaining schedule is one of the toughest in the league. It might be too early to count them out, though. In 2014, Carolina went 3-8-1, won its final four and took the South and then a playoff game.

Atlanta was the favorite in last night’s matchup, out in front with a clear lead in the lines. However, Carolina defied all the odds with the underdog win and a chance at staying alive. Bettors who backed the under made the right move, as the total came in just below the expected 41.5.

Up next, on November 20, the Panthers will take on the Baltimore Ravens, who are 6-3 and at the top of the AFC North. That same day, the Falcons meet the Chicago Bears, now 3-6 and leaning toward the bottom of the NFC North.