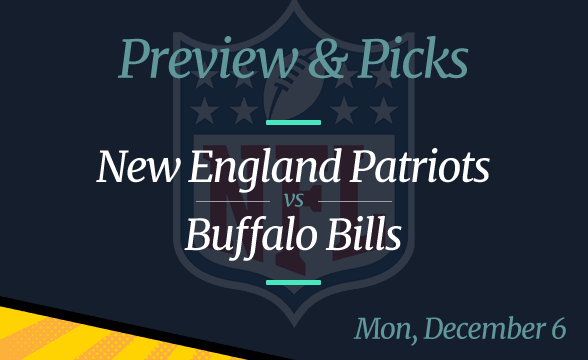 In the Tom Brady era, the New England Patriots were 32-3 against the Buffalo Bills. However, in the two games these rivals played since the legendary quarterback moved to Tampa, the Bills won each time. Can they do it once again?

Online sportsbooks surely think so, giving the role of a four-point favorite to the hosts. This may come as a bit of a surprise, knowing that Buffalo is 3-3 in the past six games, while New England is coming to Highmark Stadium after six straight wins.

The Patriots vs Bills clash will be a battle for the #1 spot in the AFC East. Whoever wins on Sunday will occupy the top place in the division.

All odds are per FanDuel as of December 3.

Bills Looking to Overtake the #1 Spot in AFC East

After losing in Week 1, the Bills went on to win four straight games, establishing themselves as one of the top Super Bowl candidates. From there, their form dropped. In the following six weeks, they lost three times.

The first of those was a 34-31 loss to the Tennessee Titans on the road, which isn’t something to be ashamed of. However, in Week 9, something shameful happened to the Bills. They lost 9-6 to the Jacksonville Jaguars, one of the NFL’s worst teams.

Equally disappointing was Buffalo’s blowout loss to the Indianapolis Colts at home. The score was 41-15 for the visitors. The good news for the Bills’ fans is that their boys rebounded straight away, beating the New Orleans Saints in Week 12. They scored 31 points while conceding only 6.

The Bills remain one of the best defenses in the league, with 16.5 points conceded on average. In fact, there’s just one team in the entire league with a lower average. The team in question is Buffalo’s next opponent, New England.

The Patriots are the team that’s in the best form of all the NFL teams, with six straight wins. They’re also the best defense in the league, conceding just 15.8 per game on average. Their offense has also been great. With 28.0 points on average, they’re the 7th-best offense in the NFL.

The Pats’ rookie quarterback has been nothing short of fantastic so far. The man in question is Mac Jones, an Alabama product, whose completion rate is 70.3 this season. He’s passed for 2,850 yards so far, throwing for 16 touchdowns along the way and eight interceptions.

Can he keep on playing at the same level as before? The Bills surely have enough defensive power to stop him, but the rookie QB has already shown he can play against tough defenses.

Picks: New England Patriots to win; under to hit

2021-12-04
Previous Post: What is Arbitrage Betting and How do I Make Money from it?
Next Post: Samurai Gold Slot Machine: More Wilds! Extra Cash!