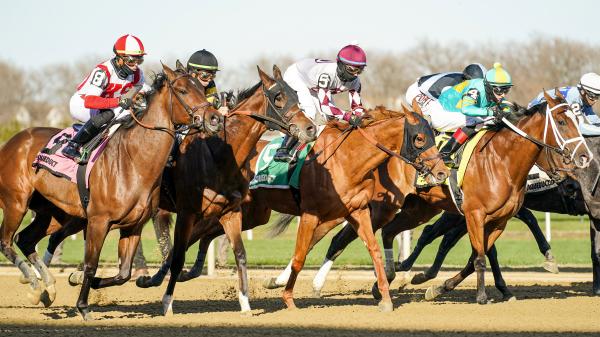 #1 Reinvestment Risk: This Chad Brown trainee has shown lots of promise, but he’s had trouble staying healthy. He broke his maiden impressively at Saratoga in August of 2020, then finished second in two Grade 1 races. Since finishing off the board in the 2020 TVG Breeders’ Cup Juvenile Presented by Thoroughbred Aftercare Alliance, he’s only raced twice, and has competed just one time in the past nine months. However, that one race was an impressive effort. He stalked the pace and drew off late to win a second-level allowance optional claiming race Feb. 26 at Gulfstream Park, earning a Brisnet figure of 99. Considering it was his first race since last June, that was pretty sharp. He’s been working steadily for this spot at Brown’s Florida base, suggesting that he’s in top physical form and ready to fire a big race second off the layoff.

#8 Scaramouche: Ten 3-year-old sprinters will compete in the final race on the program. I’ll take a chance with a stakes winner who is likely to go off at a good price. Scaramouche ships in from Parx Racing for trainer Guadalupe Preciado, where he’s won two consecutive races impressively. He broke his maiden in late January by five lengths and withstood pace pressure early in that race before drawing off in the stretch. In the Rittenhouse Square Stakes next out, he recovered from an awkward break to once again set a contested early tempo, but withstood all challengers and won by 5 1/4 lengths. He’s rapidly improved with each start, and his last-out Brisnet figure of 96 is the second-best last-out mark in Saturday’s race. If he goes off near his 20-1 morning line, he’ll make for an excellent value play.