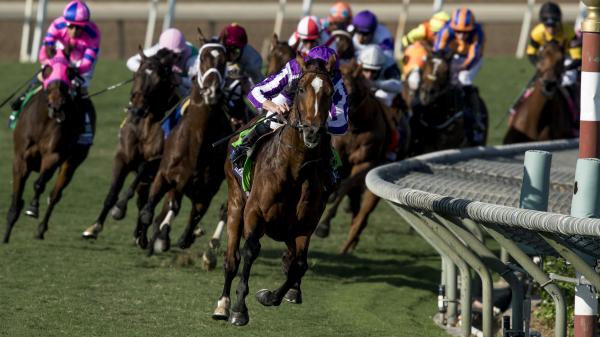 Held at 1 1/2 miles, the Breeders’ Cup Turf is routinely won by international runners but determining which is most likely to prevail can be challenging. With this in mind, we’ve taken a look at the history of the Breeders’ Cup Turf to uncover a few noteworthy tips and trends helpful for narrowing down the list of contenders.

Let’s explore some of the key data to consider:

Any running style can succeed

The Breeders’ Cup Turf tends to unfold in fair fashion, with every running style having a roughly equal chance at victory. Highland Reel (2016) led from start to finish, Tarnawa (2020), Found (2015), and Magician (2013) came charging from far behind, and many others have won from stalking or mid-pack positions. Class is what counts in the Turf — if you’re good enough, you can win from anywhere.

Favorites must be included in the superfecta

Between 2004 and 2017, a span of 14 years, just one favorite managed to prevail in the Breeders’ Cup Turf. But recent years have seen a new trend emerge, with favorites Enable (2018) and Bricks and Mortar (2019) getting the job done at short prices. In addition, the favorite has finished fourth or better in the last 13 editions of the Turf, so if you’ve been betting against favorites entirely, you haven’t been cashing any superfecta tickets.

Bet horses based outside of North America

Over the last two decades or so, the home team has struggled to take home top honors in the Breeders’ Cup Turf. Did you know 17 of the last 23 Turf winners were based overseas at the time of the Breeders’ Cup victory, leaving just six wins for North America?

Much of Ireland’s success in the Breeders’ Cup Turf is owed to trainer Aidan O’Brien. The acclaimed Irish conditioner has won the Turf a record-setting six times (all with Irish-breds), securing four of the last 10 renewals with Highland Reel (2016), Found (2015), Magician (2013), and St Nicholas Abbey (2011). Furthermore, 15 of O’Brien’s 27 Breeders’ Cup Turf starters have finished in the top three.

The record of Sir Michael Stoute is just as impressive with four wins and two seconds in the Turf from just 15 starters, including back-to-back wins with Conduit in 2008-’09.

Two of the most successful jockeys in Breeders’ Cup Turf history are Frankie Dettori and Ryan Moore. Dettori has ridden five winners from 18 mounts while finishing fourth or better on 12 occasions. Moore’s record is arguably even better — four wins, three seconds, three thirds, and one fourth from 11 rides. To put it another way, all 11 of Moore’s Breeders’ Cup Turf mounts have finished in the superfecta.

Suffice to say, when Dettori and/or Moore are slated to ride in the Turf, it’s wise to sit up and take notice.

Grade/Group 1 winners are tough to beat

It usually takes a horse of proven quality to win the Breeders’ Cup Turf. Nine of the last 10 winners had previously nabbed victory in a Grade 1 or Group 1 race, suggesting inexperienced and up-and-coming types are significantly less likely than established stars to win the Turf.

Fillies and mares hold their own against males

With this evidence in mind, there’s no reason to believe fillies and mares can’t hold their own against males in the Breeders’ Cup Turf. On the contrary, they’re in the hunt for victory more often than not.

A formidable group of European raiders will take aim at the 2021 Breeders’ Cup Turf, so there’s a strong chance the historical trends favoring overseas challengers will hold true once again.

Among the best of the raiders are three elite fillies and mares. The first is Tarnawa, reigning winner of the Breeders’ Cup Turf. The Irish-bred mare exits a game runner-up effort in the Prix de l’Arc de Triomphe and may start as the favorite at Del Mar, so she’s a good fit for the historical profile of a Breeders’ Cup Turf winner.

Teona is another logical contender if she starts in the Turf, although the Breeders’ Cup Filly and Mare Turf is also under consideration. The improving 3-year-old picked up her first Group 1 win when upsetting Epsom Oaks heroine Snowfall in the Qatar Prix Vermeille Sept. 12 in France, but she skipped the Prix de l’Arc de Triomphe due to unfavorable ground conditions. The Irish-bred filly will arrive at the Breeders’ Cup with a relatively light campaign under her belt, setting the stage for a possible career-best performance.

But the best match for the historical profile of a Breeders’ Cup Turf winner might be Love. Conditioned by Aidan O’Brien, the Irish-bred 4-year-old is a five-time Group 1 winner over distances ranging from seven-eighths of a mile to 1 1/2 miles, with a nine-length romp in the 2020 Investec Epsom Oaks ranking as her signature victory.

Love missed the Prix de l’Arc de Triomphe with an illness and enters the Turf off a narrow defeat in the Group 2 Blandford Stakes in Ireland, but since a last-out victory isn’t critical for success in the Turf, this isn’t a major concern. Ryan Moore has ridden Love in her last 10 starts and figures to retain the mount at Del Mar, which means Love is a nearly perfect match for all our historical handicapping rules. Perhaps we’ll see her spring a mild upset?