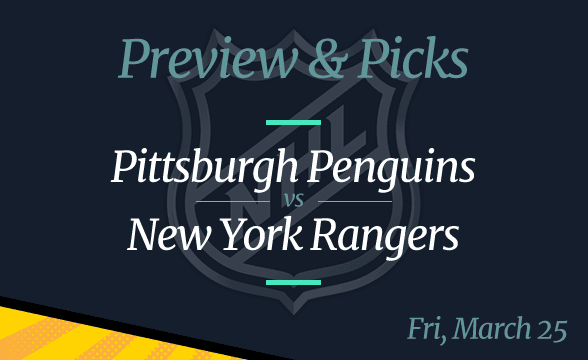 On Friday afternoon, we’ll see a clash between two Metropolitan Division rivals, the Pittsburgh Penguins (39-10-16) and New York Rangers (40-5-19). Both teams still have a decent chance to finish the regular season in the top spot in the division. It’s because both are just a couple of points behind the current #1, Carolina Hurricanes.

With just five weeks left before the regular season wraps up, every single game matters. The one played on Friday matters even more! This could be the hardest challenge both the Penguins and the Rangers will in the remainder of the season.

The Penguins are 7-1-2 against the Rangers in their previous ten meetings. This season, they’ve played once so far, with Pittsburgh winning 1-0 at home. When it comes to their duels played in New York, the Penguins are 5-2-3 since April 2017.

Another thing going in this team’s favor is that they’ve been in a pretty decent run this month. Since the start of March, we saw the Rangers go 6-2-2. Their most recent game saw them lose to the Buffalo Sabres on penalties after 3-3 in regulation/overtime.

They’ve been equally good in the offense and the defense, with a goal differential of 213:172. This makes them the third highest-scoring team in the Eastern Conference, as well as the fifth-best defense in the East.

As you’d imagine, their best player this season has been Sidney Crosby. The legendary Canadian has already scored 23 goals, while also making 43 assists. One of those assists happened in the previous duel with the Rangers.

For most of the season, the Rangers’ strongest weapon has been their defense. Right now, they have 167 goals against them, which makes them the second-best defense in the conference, with just one goal more than their city rivals, the New York Islanders.

Still, their defensive stats were even better a few weeks ago. However, we saw their defensive performances drop in the last couple of games. For instance, in their most recent game, they allowed seven goals against the Islanders. Earlier this month, they also conceded six against the St. Louis Blues, as well as five against the Minnesota Wild.

The same as the previous Penguins vs Rangers duel, this one should be close as well. However, we might see more goals than the last time. The thing is that the Rangers aren’t doing great at the back at the moment, while their offensive output remains decent. When it comes to the Penguins, they seem to be great in all aspects of the game.