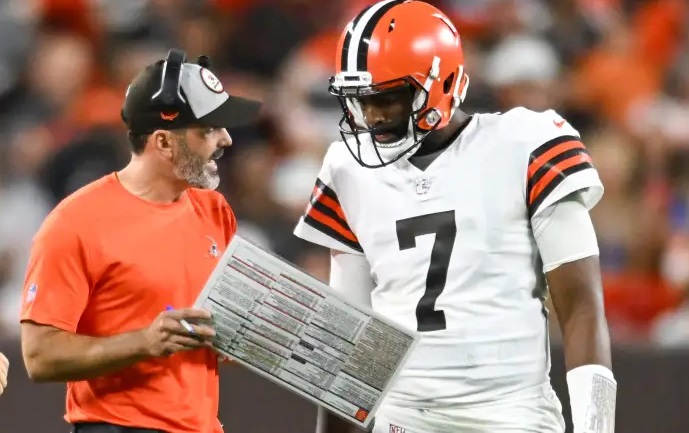 The Pittsburgh Steelers travel to Cleveland Thursday night to oppose the Browns, writing another chapter in a rivalry which predates both leaving the NFL to join the post-merger AFC. Currently, each is in desperate need of a win, tied in the AFC North at 1-1. Clefeland is favored with a spread of -4½, while the over-under is at 38½ points, with those numbers per NFL odds.

The Cleveland Browns come off a brutal loss Sunday, 31-30 to the visiting New York Jets. The Browns led by 13 points with just 1:30 left in the game, but Heimliched it away. New York scored a (blown-coverage) touchdown, executed a successful onside kick, then another touchdown to win the game. Cleveland will be hoping this quick turnaround works to their advantage.

The Browns have a much more potent offense than Pittsburgh does, as running back Nick Chubb ran all over the Jets last week. He ended with three touchdowns in just 17 carries. In the early season, Cleveland is averaging just over 200 rush yards per game, leading the NFL. Pittsburgh’s struggled to defend the run, and the Browns obviously shall look to exploit that, by feeding Chubb early and often.

Conversely, the Cleveland defense, good as it was supposed to be, started abysmally this season. The Browns have surrendered the sixth-highest point total this season. They’ve faltered in the secondary, but the Steelers just don’t do too many creative things on offense. Thus, the Browns need to minimize the short passes that quarterback Mitchell Trubisky tries to complete, specifically with wide receiver Diontae Johnson.

Pittsburgh lost, 17-14, at home to the New England Patriots last Sunday. Pittsburgh couldn’t do anything against the Patriots’ defense. The Steelers are third-worst in NFL yardage this season, 510 yards through two games. A non-existent running game is averaging 83 yards per game, which isn’t exactly helping Mitchell Trubisky at quarterback.

However, Pittsburgh has been saved by its defense. In the opener, the Steelers pried five takeaways out of the Cincinnati Bengals, carrying them to a (sloppy) win in overtime. However, the Patriots won the turnover battle last week, and the offense couldn’t pull its weight to keep Pittsburgh in it. If the Steelers’ defense can offer some field position to the offense, Pittsburgh will have a shot.

They need to force Browns’ quarterback Jacoby Brissett to pass more than 25 times. Pittsburgh will need to stop the running game of Cleveland early, something the New York Jets couldn’t do.

Pittsburgh has one of the best pass rushes in the league, and safety Minkah Fitzpatrick is back to his 2020 form. Brissett not being comfortable is one the things to observe in this game.

Cleveland (+350) and Pittsburgh (+650) are ranked second-to-last and last, respectively, in AFC North title odds, according to NFL odds.

This will surely be close, as these rivals do not want to risk too much and lose Thursday. Pittzbirgh hasn’t been able to run the ball, and the Browns have one of the worst quarterbacks. However, it is the Steelers’ defense that has remained consistent this season, and that stability is what we think is the difference. While the Browns’ defense struggled against a bad Jet offense, the Steelers defense at least held their end of the bargain against New England.

Take the Steelers and the points. It will at least be a tight Thursday night game. The Browns proved last week that their defense is susceptible to surrender points very quickly to offenses that are less than average. The Steelers only need Trubisky to manage the game, in order to win this game. Expect a lot of field goals as well, before the Steelers emerge with the victory, The 4½ points are too many to ignore, as is the under here.