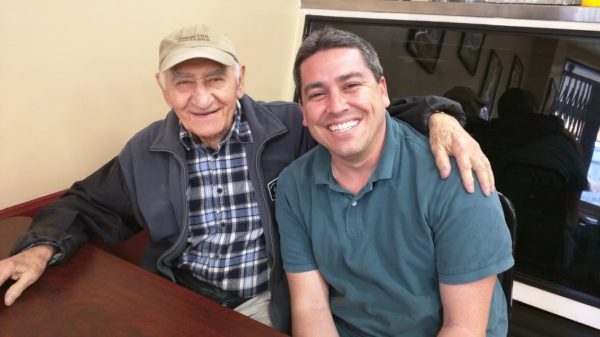 Members of the poker community recently mourned the loss of Los Angeles resident and renowned poker columnist George Epstein (pictured left above alongside Robbie Strazynski), who passed away on the morning of March 29 at the age of 95.

Epstein, a member of the Senior Poker Hall of Fame, was born in Boston in 1926 and attended the University of Massachusetts and Massachusetts Institute of Technology (MIT) before having “a distinguished career as an aerospace engineer,” according to an obituary published by the Los Angeles Times.

After retiring in the 1990s, Epstein, a veteran who served in the Navy during World War II, began a “second career” in the poker industry that included writing columns for various poker sites and publishing poker strategy books.

One of those books, Hold’em or Fold’em?: An Algorithm for Making the Key Decision, offers strategy to improve limit Hold’em play, while The Art of Bluffing and Other Forms of Deception in Poker walks through when and how to make a move against your opponents.

Epstein was also an accomplished poker columnist and had his writing published by the likes of Poker Player Newspaper, Gaming Today and Cardplayer Lifestyle, where he published a hundred articles and earned the moniker of “Senior contributor.”

In his most recent Cardplayer Lifestyle column, published on March 22, the 95-year-old walked through evidence that poker-playing and other brain-stimulating activity can help prevent Alzheimer’s.

“I have often written about Alzheimer’s in my poker columns. My interest was stimulated years ago when I observed that members of our Claude Pepper Seniors poker group – over 200 in all – did not seem to contract Alzheimer’s over an extended period of time,” Epstein wrote in the coulmn. “Could playing poker be a way to prevent Alzheimer’s? My research told me that mentally challenging activities help our brains to remain healthy.”

In another column, Epstein discussed the social and mental aspects of live poker and how to improve “soft” skills at the table.

“Soft poker skills are mental issues including social interactions and mental challenges. Other soft skills include controlling your emotions, respecting your opponents, not giving off any tells, avoiding going on tilt, realizing that bad beats are part of the game and are unavoidable, and always being patient no matter what,” Epstein wrote in the column, which was published in November 2021. “Like the hard skills, these soft skills are extremely important aspects of playing winning poker over the long term.”

George Epstein signing one of his books.

Upon learning of his death, Cardplayer Lifestyle founder Robbie Strazynski published a touching tribute of his friend and collaborator, who he remembered as being “sharp as a tack” and an overall “great person.”

It’s with deep sorrow and sadness that I bear the news that @PokerLifeMedia’s Senior Contributor George Epstein has… https://t.co/kmpitQa8oC

“I’ve learned many, many lessons from George including this very important one: While humans have an inherent biological need to be heard, this need doesn’t taper away with age,” Strazynski wrote in the tribute. “It’s just up to us to keep listening.”

The Cardplayer Lifestyle founder also noted that Epstein’s poker articles “have been read by tens of thousands of people and legions more will continue to learn from his poker strategy articles for years to come.”

Wonderful piece by @cardplayerlife on the passing of poker icon George Epstein. https://t.co/nToAAGjHAl

Poker coach Donna Blevins, meanwhile, wrote that Epstein “brought joy to the world and to the poker table.”

RIP George Epstein. You brought joy to the world and to the poker table. Thank you Robbie @cardplayerlife, for carr… https://t.co/ysSVa4RFzX

Epstein’s many Cardplayer Lifestyle poker columns can be read at cardplayerlifestyle.com/authors/george-epstein.

Epstein was laid to rest on Friday at Hillside Memorial Park in Los Angeles.