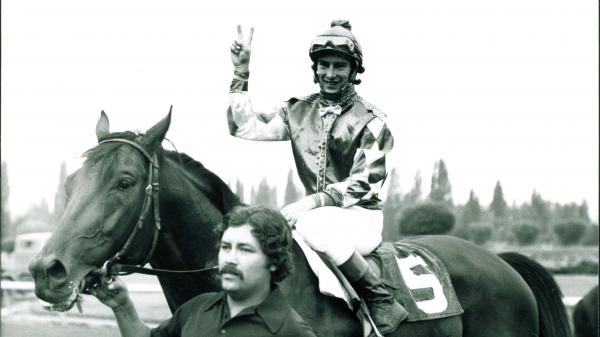 In the sport of horse racing, a great deal of emphasis is placed on winning the Kentucky Derby, Preakness, and Belmont Stakes, the three races that comprise the coveted U.S. Triple Crown.

Almost as much attention is paid to the Breeders’ Cup, the 14-race extravaganza that serves as the year-end championship of U.S. horse racing.

As a result, if a horse, jockey, or trainer does not win one or more of these prestigious races, it can be easy for them to slip through the cracks of history. Such has been the case with Sandy Hawley, one of the greatest jockeys of all time.

True, Hawley never won the Kentucky Derby, Preakness, or Belmont, nor did he win any Breeders’ Cup races. But his many other accomplishments were staggering in both number and significance, forever etching his place among the legends of the sport.

Over the course of a career that began in 1968 and lasted for 30 years, Hawley won just about every race there was to win in his native Canada. Born on April 16, 1949, he started riding at the age of 19 and was an overnight sensation, winning 230 races in 1969 to lead all apprentice riders in North America. The following year, he took his career to a new level by winning an incredible 452 races, more than any other jockey in North America — apprentice, or otherwise — in 1970. Two years later, he won 367 races to claim the title again, and in 1973, he achieved a feat that seemed impossible by becoming the first jockey to win more than 500 races in a single year, guiding his mounts to the winner’s circle on 515 occasions to easily surpass the previous record of 485 held by Bill Shoemaker.

Having thoroughly conquered Canada, winning more races than any other jockey in the nation for six straight years, Hawley set his sights on the U.S. and began riding in California in 1975. He quickly found success, and in 1976 he reached the pinnacle of the sport. Once again, he led all jockeys in North America with an impressive 413 wins, but more importantly, he won a remarkable 17 graded stakes races from coast to coast and in Canada, scoring prestigious victories aboard the veteran California-bred Ancient Title, the talented 3-year-old Majestic Light, and champion turf male Youth. For his accomplishments, Hawley was awarded the Eclipse Award as outstanding jockey in 1976.

The wins kept coming for Hawley in 1977, when he was the regular rider of Cascapedia, who won the Grade 1 Vanity Handicap, Milady Handicap and Hawthorne Handicap to secure the Eclipse Award as champion older female. He also enjoyed continued success aboard Ancient Title and Majestic Light, the latter winning a pair of Grade 1 races on dirt and turf to stamp himself as among the best horses of his generation. In addition, Hawley picked up his first top-three finish in a U.S. Triple Crown race, finishing second in the Belmont Stakes aboard Run Dusty Run.

Hawley spent the majority of the 1978 season riding in Canada, where he once again led all Canadian jockeys by races won with 312 victories. Among those wins was the Queen’s Plate Stakes, the Canadian equivalent of the Kentucky Derby, and Hawley’s success led to him being honored with the Sovereign Award for outstanding jockey in Canada. Back on the road the next year, he picked up the mount on the promising 3-year-old Golden Act, and the pair proceeded to win the Arkansas Derby and place in the Kentucky Derby, Preakness, and Belmont Stakes. Later in the season, Golden Act won three more major races with Hawley in the saddle, including the Grade 1 Canadian International Championship Stakes.

Hawley won Grade 1 races on Eleven Stitches, Doonesbury, Fali Time, Marimbula, Fact Finder, and others throughout the 1980s. On June 26, 1986, he became the ninth jockey in North American history to win 5,000 races. As he kept winning major races, other accolades followed. He was inducted into the Canadian Horse Racing Hall of Fame in 1986, and two years later — back in Canada, this time for good — he led all jockeys in Canada with 196 winners and was honored with a second Sovereign Award as Canada’s outstanding jockey. In 1992, he received yet another honor when he was inducted into the Racing Hall of Fame in Saratoga Springs, N.Y.

By the 1990s, Hawley’s career was beginning to wind down, with graded stakes wins becoming fewer and farther between. He was still winning a remarkable percentage of the races he rode, but he wasn’t riding in as many as he had during the 1970s. He led all Canadian jockeys in victories one last time in 1990, then slipped to third in 1991 and eventually dropped out of the top three as he rode fewer races.

On July 1, 1998, Hawley hung up his saddle with a career tally of 6,449 wins from 31,455 rides, and that same year, he received the ultimate honor when he was inducted into the Canadian Sports Hall of Fame.

As things would turn out, Hawley still had one more race to ride. On Oct. 18, 2008, Hawley rode in a “Living Legends” race at Santa Anita Park, a special event that featured eight Hall of Fame riders back from retirement to ride against each other. Guiding a horse named Tribal Chief, Hawley won the race in front-running fashion to secure his 6,450th victory, which ranks 13th on the all-time list of leading North American jockeys by victories.

“I always hoped to get to 50, but I never thought I’d do it,” Hawley was quoted as saying in an article on BloodHorse.

Today, Hawley remains involved in racing as a public relations ambassador for the Woodbine Entertainment Group. He has done TV commentary of horse races in Canada, including the Queen’s Plate Stakes. It’s hard to believe that more than 40 years have passed since he lit up the racing world with his record-setting run in the early 1970s, but one thing is certain — for as long as racing fans gather and discuss the greatest jockeys of the sport, Hawley will always be part of the conversation.