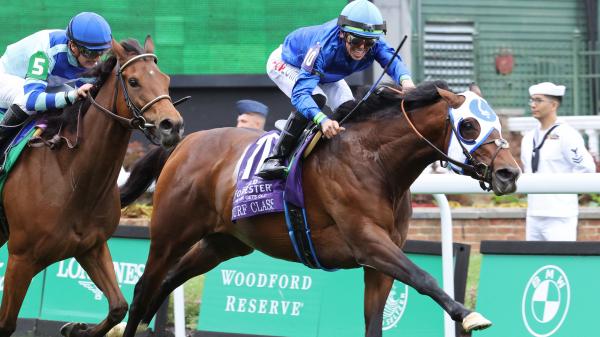 The $1 million, Grade 1 Arlington Million Stakes will be run in its traditional place during the summer, but now it will be at Churchill Downs on a special one-day of racing at the storied track. The former centerpiece of Arlington International Racecourse’s meet still packs a lot of horsepower. Nine turf stars have signed on to run, including two horses who have already earned over $1 million in their career. Six of the other seven will go over the $1 million mark in career earnings if they win Saturday.

Smooth Like Strait has the highest career bankroll at $1.5 million, with 15 of his 20 career starts having resulted in wins or runner-up efforts, one of those second-place finishes coming in his last start, the Grade 1 Shoemaker Mile Stakes on May 30. Field Pass brings a strong record into the race with $1.1 million earned and nine career wins, the most recent of those in the Grade 2 Seabiscuit Handicap last fall. Santin has only run seven times to date compared to at least double that for most of his opponents, but he’s made the most of those starts with three wins including the Grade 1 Old Forester Bourbon Turf Classic Stakes run on Kentucky Derby day this spring at the same 1 1/8-mile distance of the Arlington Million. Set Piece won the Grade 2 Wise Dan Stakes in June of last year and has won four of five starts in his career on turf at Churchill Downs (although this turf course at Churchill is a new one, debuting in the spring). Set Piece also won the Grade 2 Dinner Party Stakes in May. Sacred Life enters the Arlington Million following a win in the Grade 3 Monmouth Stakes and rarely runs a bad race, having finished first or second in 17 of 26 career races on grass. Megacity crossed the wire in front of Field Pass last month in the Texas Turf Classic Stakes before being disqualified and placed second for interference. Admission Office also has credentials to be competitive in this field as he won the Grade 3 Arlington Stakes on this new Churchill Downs turf course in June. Likewise, Cellist won the Grade 3 Louisville Stakes over this course in May. Cavalry Charge won the Grade 3 Fair Grounds Stakes on turf in February at the distance of the Arlington Million and enters the race off a second place finish in a stakes at Horseshoe Indianapolis behind multiple Grade/Group 1 stakes winner Ivar.

Santin is one of only two 4-year-olds in this year’s Arlington Million Stakes (the other being Cellist) and he has only run badly in one of seven career starts. That was when he finished sixth in his most recent start, June 11 in the Grade 1 Resorts World Casino Manhattan Stakes, and that occurred possibly because one of his shoes had to be repaired in the paddock just before the race. That poor effort might also have been due to the 1 ¼-mile distance of the race – which he was attempting for the first time – or the fact he was racing at Belmont Park for the first time. Prior to the Manhattan, Santin ran the best race of his career at the 1 1/8-mile distance of the Arlington Million and at Churchill Downs. That effort came in the aforementioned Old Forester Bourbon Turf Classic Stakes in May, where the colt earned a career best 115 Equibase Speed Figure. In that race Santin battled head-and-head for the entire last three-sixteenths of a mile. That was his first start in blinkers and it really seems to have made a difference. Jockey Tyler Gaffalione was aboard that day and rides back Saturday, and since shipping from New York back to Churchill Downs Santin has put in a very sharp three-furlong blowout in the morning. That should put him on edge for a repeat of his Turf Classic effort in the Arlington Million.

Set Piece also should bounce back to his best form shipping in from New York to race at Churchill Downs, where he has won four of five on turf. The best of those efforts came 14 months ago when rallying from last of 10 to win the Wise Dan Stakes in visually impressive fashion, earning a strong 112 figure. After taking seven months off from September of last year until this April, Set Piece got back into the winner’s circle in his second start on the comeback trail, rallying from next to last to win the Dinner Party Stakes in May. Next, in the Grade 3 Forbidden Apple Stakes last month, Set Piece moved up from 11th to within just about one length of the leaders when he found himself behind a wall of horses, getting a path to run much too late to have an impact and finishing fifth. Before shipping from New York, Set Piece put in a fantastic morning drill when running four furlongs in 47.8 seconds, the best of fifty-nine workouts at the distance on the day. As such, it is very reasonable to expect Set Piece to return to a form level that’s good enough to win this race.

Regarding one of the likely betting favorites, Smooth Like Strait, there’s little doubt he fires nearly every time, having finished first or second in 15 of 20 career starts on grass. He missed by a half-length in the FanDuel Breeders’ Cup Mile Presented by PDJF last fall, earning a career-best 119 figure. He also finished third in the Maker’s Mark Mile this past spring and other than that has been first or second in his last six races, all at the Grade 1 or Grade 2 level. Still, he does his best running at a mile, not at this 1 1/8-mile trip. The last two times he ran 1 1/8 miles, Smooth Like Strait led with an eighth of a mile to go and although he continued to compete to the finish he was beaten by a neck in both of those races.

2022-08-10
Previous Post: Caesars and EBCI to Build a $650M Casino in Virginia
Next Post: Create Your Winning Story At Vera And John Casino By Using The Right Strategies