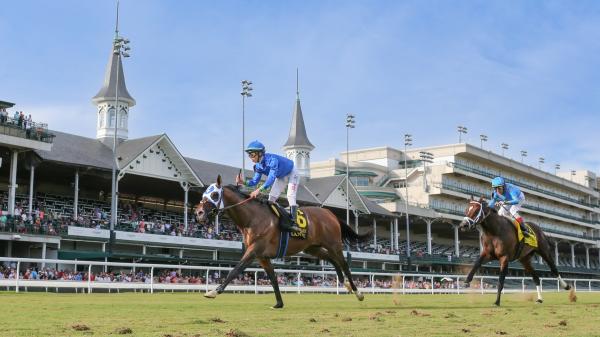 When all was said and done, the Arlington Million Stakes, despite lacking any overseas entries, still had a touch of international flair thanks to Santin, a Godolphin homebred colt who lifted the trophy Aug. 13 as the race moved to Churchill Downs.

Santin, a 4-year-old, Kentucky-bred colt by Distorted Humor, shadowed pacesetting Smooth Like Strait into the stretch turn of the Grade 1 Million, challenged at the three-sixteenths pole, and drove by to win by 1 3/4 lengths.

Winning jockey Tyler Gaffalione said the plan from the beginning was to keep Santin close to Smooth Like Strait and to make a late run. That strategy became doubly important, he said, with the scratch of the speedy Megacity, and with speed holding well in the day’s only other turf race, the Beverly D. Stakes.

“Earlier, we rode in the Beverly D. and it looked like speed was holding up pretty well on this course,” Gaffalione said. “With the scratch of the other speed, we didn’t want to let Smooth Like Strait get away.”

Winning trainer Brendan Walsh said the Million played out similarly to Santin’s victory in the Old Forester Bourbon Turf Classic Stakes on the Churchill turf on Kentucky Derby day, May 7.

“It was the same type of race,” Walsh said. “Tyler got him in a good position and we knew from the Beverly D. that you probably wanted to be up there with the pace. He delivered on what we thought he could do. He’s been training super.”

Santin finished fourth in his 2022 debut at Fair Grounds, then second in the Muniz Memorial Classic Stakes Presented by Horse Racing Nation, ironically behind Two Emmys, winner of the 2021 version of the Arlington Million although redubbed the Mr. D. Stakes and run for $600,000.

He reported sixth in the Resorts World Casino Manhattan Stakes at Belmont Park June 11 at 1 1/4 miles.

“A mile and an eighth is probably as far as he wants,” Walsh said, citing the distance as a factor in that loss. “I wouldn’t be shy to drop him back to a mile or a mile and a sixteenth.”

Smooth Like Strait, a 5-year-old son of Midnight Lute, continued a string of second- and third-place finishes that now stands at seven. Many of those were at a mile and in all of them he surrendered the lead late. All were graded stakes.

With Churchill Downs scrapping turf racing over the final three weeks of its spring meet and limiting the use of its immature turf course for a special afternoon of summer racing Aug. 13 by canceling two graded stakes races, trainer Al Stall Jr. saw opportunity for his Beverly D. Stakes prospect Dalika. He admitted to being “actually kind of happy that there was a bit of a question mark on the surface.”

He’s even happier now. On Saturday, Dalika capitalized on the conditions, facing just four opponents in the $500,000 Beverly D. and turning away Princess Grace to upset the 1 1/8-mile turf race at 7-1 odds, the highest price in the short field.

“This was the perfect confluence of events for us to win a Grade 1,” Stall said.

Not that it was handed to the 6-year-old mare. Though she enjoyed a favorable trip, initially racing clear on the lead with quarter-mile fractions of :23.14 and :46.44, Princess Grace challenged her on the second turn, as the Dalika hit the six-furlong marker on 1:10.13.

By midstretch, Princess Grace appeared to have the momentum, poking her head in front, but Dalika found more in reserve under Brian Hernandez Jr., battling back to win by a half-length.

She was timed in 1:46.31 over the “good” course, which was laid down with sod last year and first used for racing this spring.

Dalika paid $17.02 for a $2 win wager. (Churchill Downs began penny breakage Saturday, which was initiated in Kentucky this summer at Ellis Park.)

Princess Grace, under Florent Geroux, held second by two lengths over a steady-paced Family Way, who was third.

The Beverly D. is a “Win and You’re In” Challenge Series race for the Maker’s Mark Breeders’ Cup Filly and Mare Turf, earning Dalika an expenses-paid berth to the World Championships should she become nominated to the event.—Byron King