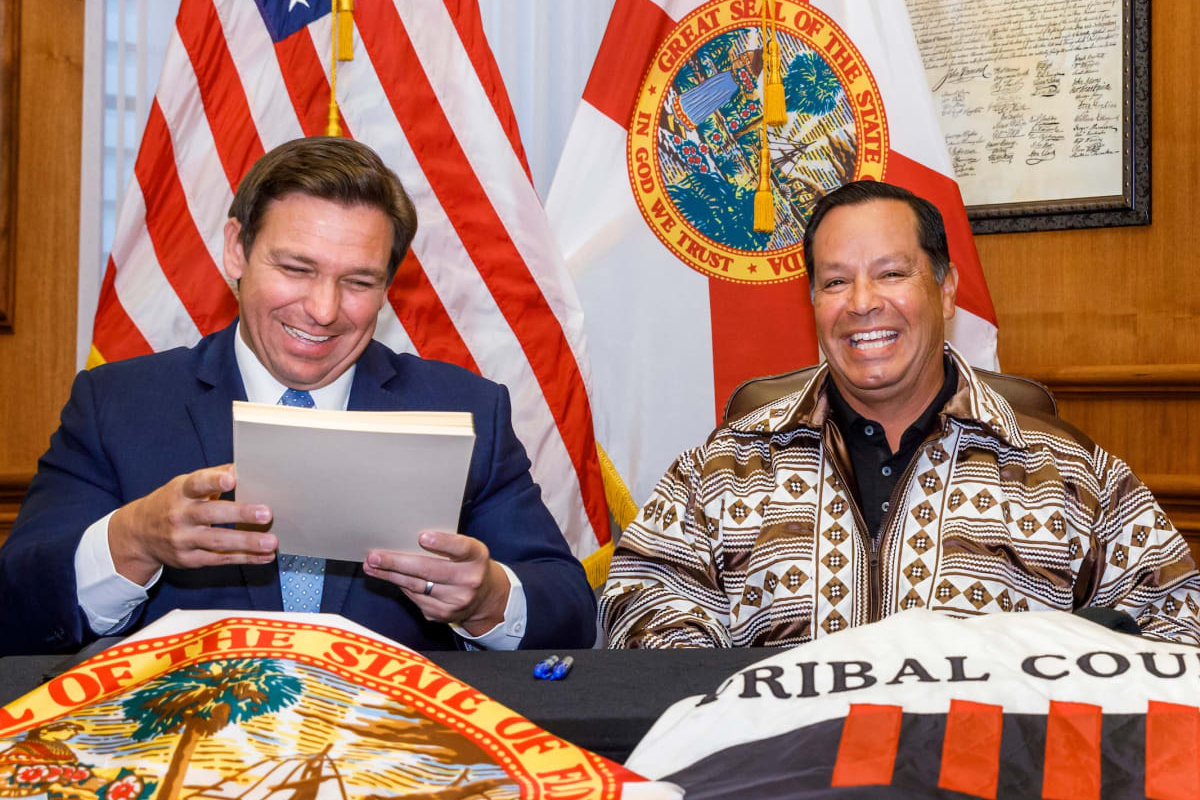 The Seminole Tribe and DeSantis last year reached a gaming expansion deal to include sports betting online and in-person, as well as new casino games. The updated contract — known as a Class III gaming compact — continued to maintain the tribal nation’s near-monopoly on most forms of gambling in the Sunshine State.

After a brief stint operating sports betting, a federal judge last November nullified the compact. The legality of the agreement remains tied up in court, and as a result, Floridians have no legal outlet inside the state to place a sports bet.

Despite the gaming expansion holdup, the Seminoles continue to donate heavily to DeSantis and the Republican Party in Florida and across the nation. The $1 million donation to DeSantis’ political campaign arm comes after the Hard Rock owner contributed $3 million earlier this year to the Republican Governors Association (RGA).

The RGA is one of DeSantis’ largest donors. The association has given the Friends of Ron DeSantis PAC $10.75 million this year alone.

The Seminole Tribe has long been lobbying state lawmakers in an effort to maintain its control of slot machines outside of Miami-Dade and Broward counties, and most table games everywhere across the state. US and global gaming interests, specifically Las Vegas Sands and the Genting Group, have been trying to convince state lawmakers to legalize commercial casino gambling and end the Seminole’s stronghold on the state gaming industry.

“In general, the tribe does contribute to issues and candidates in Florida and other states, according to its best interests,” explained Gary Bitner, a spokesperson for the Seminole Tribe. “The Tribe doesn’t comment on reports of specific campaign contributions.”

DeSantis is the heavy favorite to win Florida’s 2022 gubernatorial. PredictIt bettors give DeSantis about a 92% chance of winning a second term on November 8.

Bill Foley, the owner of the NHL Vegas Golden Knights, is also a stout DeSantis supporter. Foley has contributed $111,217 to the DeSantis PAC so far in 2022.

The FBI’s search of former President Donald Trump’s Mar-a-Lago Palm Beach estate last week has only improved DeSantis’ odds of winning the 2024 presidential election. Though he’s said to be waiting on Trump to determine if he’s running, DeSantis is the 2024 betting front-runner.

PredictIt’s latest odds imply a 30% chance of DeSantis winning the 2024 presidential election. Trump is next at 27% and President Joe Biden is third at 21%.