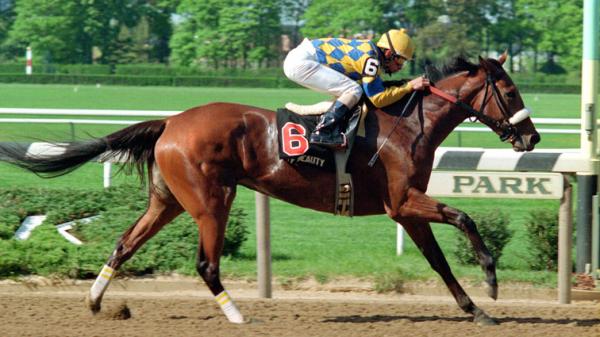 Sky Beauty: The Epitome of Class With the Ability to Take Your Breath Away

The late Allen Jerkens trained Beau Purple when he upset the mighty Kelso three times in the 1960s. He saddled Onion when he shocked Secretariat in the Whitney Invitational in 1973 and got the best of “Big Red” once more that year with Prove Out in the Woodward Stakes.

Yet, when Jerkens was asked to name the top horse he conditioned, he immediately responded with Sky Beauty. “She’s in front of all of them,” he told the Daily Racing Form, adding, “She was sheer class.”

Jimmy Jerkens served as an assistant trainer to his father when the daughter of Blushing Groom emerged as a leading lady in the early 1990s. He will always remember how that class showed during certain drills.

“Some of the workouts she put out in the morning took your breath away,” he said.

There was some frustration with Sky Beauty, too. She won three of her four starts as a 2-year-old in 1992 but was denied a clean sweep when she was disqualified from first to third in the Spinaway at the end of August at New York’s Saratoga Race Course. Jimmy Jerkens faults jockey Eddie Maple more than the horse for the lack of a straight start in the Spinaway.

“Maple didn’t do a good job of correcting her out of the gate,” he said. “It was a shame because she was much the best. They had to take her down (for interference).”

Sky Beauty continued to blossom as a 3-year-old. She dominated the uber-competitive New York circuit by taking the filly Triple Crown with a sweep of the Acorn, Mother Goose and Coaching Club American Oaks. She also won the Alabama for good measure as part of a summer to remember.

She failed to gain the Eclipse Award as the leading 3-year-old filly, though, when she fell off form and ran fifth in the Breeders’ Cup Distaff at Santa Anita Park in Arcadia, Calif. That race went to Hollywood Wildcat, who clipped Paseana by a nose.

There was no denying Sky Beauty the Eclipse as champion older female in 1994. She rattled off victories in the Vagrancy, Shuvee, Hempstead, Go for Wand and Ruffian, all Grade 1 events except the Vagrancy (Grade 3). Although she again failed to deliver in the Distaff, finishing ninth at Churchill Downs, voters decided this time that her overwhelming body of work should offset one race, even if it was the Distaff.

She opened her 5-year-old campaign by winning the Vagrancy. She was retired after she finished second to Inside Information in the Shuvee and third to Heavenly Prize in the Hempstead. She won 15 of 21 starts – nine of them Grade 1 scores – for earnings of $1,336,000. The vast majority of her success came in New York.

Jimmy Jerkens remembers that Sky Beauty could be quirky and did not ship well. She would become unsettled by new surroundings. She presented a constant challenge to his father.

“She had a wealth of talent. She trained fast and worked fast,” Jimmy said. “She had a side to her that was hard to explain. She drove him kind of crazy because she changed almost daily.

“She didn’t act the same every day. When you have a horse of that caliber, you want them to accommodate you in every way.”

His father, though, relished the challenge. “It was just too bad she didn’t do it in the Breeders’ Cup,” he told the Daily Racing Form, “but she did everything else. She was just great. Some of them are just born to be great.”