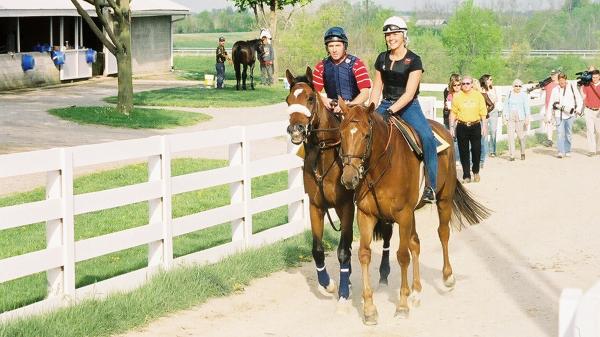 SLIDESHOW: Remembering a Spring Morning With Barbaro at Keeneland in 2006

Each year the spring meet at Keeneland brings together the best trainers, jockeys, and racehorses the sport of horse racing has to offer at one of the sport’s most iconic venues that creates this vibrant atmosphere I’ve never experienced at another track. The people of the city of Lexington, Ky., love their horses and spring at Keeneland is a time where memories are made: from friends spending a day at the track to 2-year-olds making their career debuts to 3-year-olds prepping for the Kentucky Oaks and Kentucky Derby.

For me, every spring brings back a flood of memories of Barbaro in 2006, preparing at Keeneland for his masterpiece a few weeks later at Churchill Downs on the first Saturday in May.

A while back, a social media post went around asking people to share a photo that brought back some great memories, and I dug through a vast collection of old images on disc to find my favorite image of Barbaro among the photos in the slideshow below of the future Kentucky Derby victor.

Trainer Michael Matz shipped Barbaro up to Keeneland after his Florida Derby win and, as always, he was accompanied by assistant trainer and exercise rider Peter Brette, who worked for Matz for 15 years before becoming head trainer at Lambholm South.

Brette told me at the time that Barbaro had more gears than any horse he’d ever rode, and Brette also believed he was capable of not just winning the Derby but also the Prix de l’Arc de Triomphe down the road.

To say Barbaro’s connections were very confident would be an understatement.

My wife and I were able to go out several times to watch him train and interview his connections. I had moved from the sports department of a small paper in Maryland called the Cecil Whig, which covered a county that includes Fair Hill Training Center, to Thoroughbred Times in late winter 2005. I knew trainer Matz well enough that he’d pick up when I called. He gave me a lead a few years earlier to check in with Graham Motion for a story before the 2004 Breeders’ Cup because Motion had a few talented runners targeting the World Championships — Better Talk Now won the Breeders’ Cup Turf and Film Maker ran second in the Filly and Mare Turf. Best tip, by far, that I ever got.

I contacted Barbaro’s owners, Roy and Gretchen Jackson, for a story after he won the Laurel Futurity on turf in November 2005, and the Jacksons were incredibly gracious with their time before he became a star, after he won the Kentucky Derby, and even while he fought for his life after suffering a catastrophic injury in the 2006 Preakness Stakes.

So, with the blessing of my wife, Carrie, who took the photos, I decided to share this memory of Barbaro. At the time, he was unbeaten in five starts and the Dynaformer colt seemed like he was filling out his robust body by the day leading up to his 6 ½-length Derby runaway. These photos are how I’ll always remember him: a powerhouse of a racehorse who inspired the confidence of everyone around him.