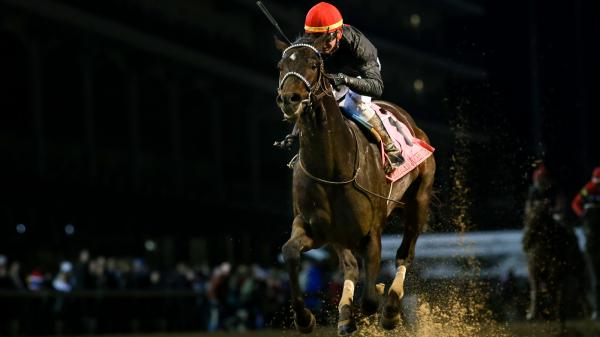 The victory improved Smile Happy to 2-for-2, stamping him as one of the early favorites for next year’s Grade 1 Kentucky Derby Presented by Woodford Reserve. He earned 10 qualifying points toward next spring’s classic with the Kentucky Jockey Club part of the track’s Road to the Kentucky Derby series.

Though he came into the Kentucky Jockey Club off a single start, a 5 1/2-length route score Oct. 29 at Keeneland, Smile Happy’s inexperience never showed Saturday. He broke alertly and settled in fifth early, as Howling Time set a moderate pace with fractions of :23.95 and :48.94.

On the second turn, Smile Happy moved into fourth with a wide advance behind six furlongs in 1:13.25, and with Howling Time beginning his eventual fade to fifth, the race was soon Smile Happy’s for the taking. He took command before the eighth pole and pulled away by 3 1/4 lengths, racing 1 1/16 miles on a fast track in 1:43.94, .78 faster than Dream Lith’s winning time in the Grade 2 Golden Rod Stakes for 2-year-old fillies a half-hour earlier.

“You’d think this horse ran 10 times already with how mature he acts,” jockey Corey Lanerie said. “He’s very ratable and easy to ride. I felt very confident with him at the half-mile pole. I could tell I had a lot of horse beneath me. I got him into the right spot, and he really kicked clear in the stretch. He’s got a bright future.”

The Kenny McPeek trainee, owned by the Mackin family’s Lucky Seven Stable, paid $11.60 as the third choice in the field of 11 reduced by the scratches of Rich Strike, Mannix, and Tiz the Bomb.

According to McPeek, who also trains Phoenix Thoroughbred III’s Tiz the Bomb, the runner-up in the Grade 1 Breeders’ Cup Juvenile Turf, that colt was withdrawn after his left front leg became inflamed this morning from what seems to be an infection.

McPeek still had the firepower necessary to win the Kentucky Jockey Club. He also captured three other races Saturday at Churchill Downs, teaming with Lanerie with three of his four winners.

“This is really a team effort, and I want to give a lot of credit to our team behind these horses. I’m really proud of the horse and thankful the Mackin family gave us this horse to train. He’s been very impressive to start his career.”

The Kentucky Jockey Club provided Lucky Seven Stable with their second graded stakes-winning 2-year-old of 2021. Rattle N Roll won the Grade 1 Claiborne Breeders’ Futurity at Keeneland for them last month. McPeek also trains that colt, who is set to resume training next week after missing a Breeders’ Cup start due to a hind foot setback.

Asked how he feels to own a pair of Derby prospects with his family, co-owner Mike Mackin, celebrating in the winner’s circle, replied: “I think I might have to go make a bet.”

His two runners (and Tiz the Bomb) are individual wagering choices in the first round of the Kentucky Derby Future Wager that continues through Nov. 28.

McPeek can also dream of the future. The Belmont Stakes and Preakness-winning trainer has started six horses in the Kentucky Derby, his best finish being a runner-up finish from Tejano Run in the 1995 Derby.

“We’ll probably take it easy with him in December and January and start deciding his future in February,” said McPeek, who also won the 2001 Kentucky Jockey Club with Repent. “At this stage we have a lot of options on the Road to the Kentucky Derby. It’s a good problem to have.”

Classic Causeway earned four qualifying points for his runner-up effort, in which he was patiently ridden from his inside post under Joel Rosario and ran evenly. Also earning points were third-place White Abarrio (two) and fourth-place Ben Diesel (one).