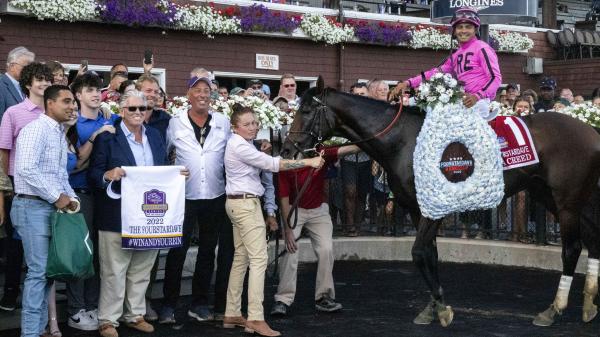 As arguably the most well-known and successful practitioner of sports talk radio, Mike Francesa has covered or discussed every major sporting event in the United States. Maybe the world.

Yet there’s something about a winning horse race, especially a Grade 1 stakes, that brings out the kind of smile he would flash whenever his beloved New York Yankees won the World Series.

At Saratoga Race Course Aug. 13, euphoria abounded as Francesa and his racing partner Lee Einsidler celebrated yet another top-level by their 6-year-old Jimmy Creed horse Casa Creed as he wiped away any doubts about his abilities at a mile on turf by winning the $485,000 Fourstardave Handicap over the classy mare Regal Glory.

“It’s been unbelievable,” said Francesa, who races with Hall of Fame trainer Bill Mott under the banner of JEH Racing Stable, named for his children Jack, Emily, and Harrison. “Lee and I had a lot of heartache with High Oak. He won the Saratoga Special last year and we thought he was a Kentucky Derby horse but then he [clipped heels and fell] in the Fountain of Youth and hasn’t run back. He’ll run next year but that shows you the differences in the game. You get all this happiness with Casa Creed and heartache with High Oak. That’s the game and why the wins are so sweet in horse racing. They are like nothing else in sports.”

At 3, Casa Creed won the National Museum of Racing Hall of Fame at a mile and raced twice in the FanDuel Breeders’ Cup Mile Presented by PDJF. Yet he finished third in the last two editions of the Fourstardave and Mott’s belief that 6-7 furlongs are best for the Jimmy Creed offspring is best reflected in victories in the last two runnings of the six-furlong, Grade 1 Jaipur Stakes, the most recent of which earned him a free spot in the Breeders’ Cup Turf Sprint.

Now, after taking the “Win and You’re In” Fourstardave, he also has a free spot in the Mile, creating a very pleasant dilemma for the connections after Casa Creed won for just the third time in 14 tries at a mile on turf.

“We’ll talk about that,” said a noncommittal Mott about which Breeders’ Cup race seemed best for the 6-year-old. “We’ve already started to hash it out.”

Plotting a strategy for the Fourstardave was the key to victory Saturday as the game plan was for jockey Luis Saez to sit back and make one run with the half-brother to Grade 3 winner Chess’s Dream, just as he would in a sprint.

“Tip him out and run them down,” Einsidler said. “It’s not that hard, Bill. It’s hard getting up at five in the morning.”

Francesa, who was never shy about voicing an opinion on his famed “Mike and the Mad Dog” radio show on WFAN, also saw the merit in a patient ride, like the ones in his previous 2022 starts that resulted in a second Jaipur win, a fifth in the $1.5 million Al Quoz Sprint Sponsored By Azizi Developments, and a second by a neck in the $1.5 million 1351 Turf Sprint Cup in Saudi Arabia during a winter stay in the Middle East.

“People thought because he was in a sprint he had to be up close, but that’s not the way for him to run at a mile,” Francesa said. “He has a great kick. I thought if he could be patient and make one run he could win and he did, beating a great filly. For breeding, it was big to get him a Grade I at two turns.”