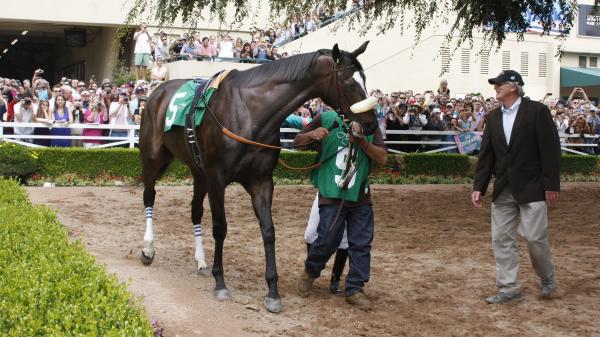 Stackin’ Cheddar: Looking Back on Rare Chance to Cash on ‘The Queen’

This marks the first edition of “Stackin’ Cheddar: Looking Back,” a new biweekly series on America’s Best Racing. Here, we’ll look back on an early race in the careers of some of the greatest horses of all time, including spots where they went off at a big price.

Thanks to her 19-race winning streak that spanned almost three years, Zenyatta was one of the most popular horses in modern American racing history. She endeared herself to racing fans with her dramatic racing style. She would drop to the back of the pack early on, make her move in the stretch, and rally past her rivals en route to victory.

Nicknamed “The Queen” or “Queen Z,” Zenyatta’s biggest win came in the 2009 Breeders’ Cup Classic, when she became the only filly or mare to win the sport’s year-end championship race.

Zenyatta made her first start in a 6 ½-furlong maiden special weight race on Thanksgiving day in 2007 at now-defunct Hollywood Park. Standing 17.2 hands, this massive filly needed more time to develop than the average horse, and as such she didn’t debut until late in her 3-year-old season. Despite the lack of experience, she received some wagering action in her debut. She was the very slight morning line favorite at 7-2, and went off as the 5.50-1 fifth betting choice.

As would become her signature, she dropped back to last place in the 12-horse field early on under David Flores. She was still six lengths behind as the field entered the stretch, but once she got into gear Zenyatta effortlessly rolled by her opponents for a three-length victory, described by track announcer Vic Stauffer as a “good-looking win.”