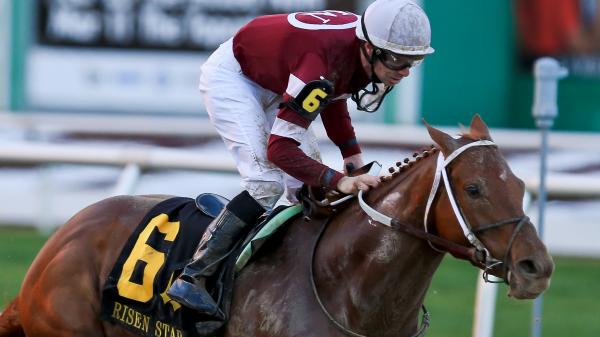 This Saturday, Fair Grounds will host the $400,000, Grade 2 Risen Star Stakes Presented by Lamarque Ford. It headlines a program featuring six stakes races, and will award the winner 50 points on the road to the Grade 1 Kentucky Derby Presented by Woodford Reserve.

Here, we’ll take a look back at some of the race’s best winners, including its namesake.

In 1970, owner and breeder Robert Lehmann won the Kentucky Derby with homebred Dust Commander. Two years later, Lehmann bred a foal from Dust Commander’s first crop, who he named Master Derby. Lehmann died in 1974, but his widow Verna elected to hold on to the colt and race him in their Golden Chance Farm colors, and it proved a wise move.

As a 2-year-old, Master Derby won two stakes races at Liberty Bell Park in Pennsylvania, and finished in the top four in four more. With aspirations of a second Kentucky Derby win on their minds, Verna Lehmann and trainer Smiley Adams sent their horse to Louisiana to begin his 3-year-old season.

While based at Fair Grounds, Master Derby won two stakes. After two defeats in six-furlong preps, Master Derby was the handy winner of the Louisiana Derby Trial Stakes, defeating Colonel Power by 2 ½ lengths under jockey Darrel McHargue. He followed that up with a win at 4.30-1 in the Louisiana Derby, prevailing by a length once again over Colonel Power.

Following a win in the Blue Grass Stakes at Keeneland, Master Derby loomed as one of the favorites for the Kentucky Derby. Unfortunately for him, he finished fourth, well-beaten by favored Foolish Pleasure.

Undeterred, Master Derby pressed on to the Preakness. Perhaps spooked by his poor Derby effort, he was dismissed at 23.40-1, the third-biggest longshot in the field. Foolish Pleasure was the comfortable 1.20-1 favorite. However, Master Derby turned the tables on Foolish Pleasure that day, winning by one length in a time of 1:56 ⅖ for 1 3/16 miles.

Risen Star was the greatest son of the immortal Secretariat, and one of the best Louisiana-based horses ever. He broke his maiden with a win in the Minstrel Stakes at Louisiana Downs in September 1987, and followed it up with a distant second-place finish behind eventual Breeders’ Cup Juvenile champion Success Express in the Sport of Kings Futurity.

For his 3-year-old campaign, Risen Star was transferred from the barn of Rene Gebbia to that of his owner, Louie Roussell III. After two sharp wins and a second-place finish in the Lecomte Handicap, Risen Star was the 11-10 favorite for the Louisiana Derby Trial.

Breaking from post eleven, Shane Romero dropped Risen Star well off the pace early on, rating fourteen lengths back at the half-mile pole. However, he took full advantage of the long stretch at Fair Grounds. He rallied all the way down the lane, surging for a one-length victory.

Following two more stakes wins, Risen Star was given a 5.50-1 chance in the Kentucky Derby but unfortunately, he had a brutal trip. After racing wide on both turns and losing precious ground, he rallied admirably in the stretch, but could only manage third behind Winning Colors.

Risen Star bounced back in his next two races. In the Preakness Stakes, he enjoyed a much better trip, and drew off to a 1 ¼-length win. As the favorite in the Belmont Stakes, he won in an awe-inspiring performance, prevailing by 14 ¾ lengths. His time of 2:26 ⅖ was the fastest since his sire won in 2:24 fifteen years prior.

While an injury prevented Risen Star from racing again, his Preakness and Belmont performances left enough of an impression on voters that he won the Eclipse as champion 3-year-old male.

It took a little while for Lawyer Ron to bloom; he didn’t break his maiden until his sixth start. Once he got going, he was tough to beat.

Lawyer Ron won the Grade 3 Risen Star Stakes under unique circumstances. Fair Grounds suffered extensive damage from Hurricane Katrina in August 2005, and was unable to hold their usual winter meet. As a result, the track held an abbreviated meet at Louisiana Downs.

It was there that Lawyer Ron squared off against six others as the 2.50-1 second choice. He was coming in off short rest, having won the Peninsula Gaming’s Diamond Jo Stakes at Evangeline Downs just fifteen days prior. That proved no problem. John McKee kept him just off early leader Mark of Success, then pounced on him on the final turn. From there, Lawyer Ron drew off to an 8 ¼-length win.

After wins in the Grade 3 Rebel Stakes and the Grade 2 Arkansas Derby at Oaklawn Park, Lawyer Ron went to Louisville as the 10.20-1 sixth choice in the Kentucky Derby. Although he disappointed when 12th on Derby day, he nevertheless went on to a fine career. As a 4-year-old, he won three graded stakes, including the Grade 1 Whitney Stakes and the Grade 1 Woodward Stakes, both at Saratoga.

Kathy Ritvo sent her top Derby prospect, Mucho Macho Man, to the Grade 2 Risen Star Stakes in February 2011, in hopes of revitalizing his aspirations. He had finished in the top four in three stakes races, but hadn’t yet won on. Bettors sent him off as the 3.60-1 third choice in the field of ten.

Although he had a solid 3-year-old campaign, including a third-place finish in the Kentucky Derby, it was as an older horse that Mucho Macho Man made his biggest impact. As a 4-year-old, he won the Grade 2 Suburban Handicap and the Grade 2 Gulfstream Park Handicap. He concluded that season with a second place-finish in the Grade 1 Breeders’ Cup Classic behind Fort Larned.

At age 5 in 2013, Mucho Macho Man avenged his Classic defeat from a year prior. He held off Will Take Charge by a nose, while finishing 3 ½ lengths clear of fourth-place Fort Larned.

Off a fourth-place finish in the Grade 2 Kentucky Jockey Club Stakes to conclude his 2-year-old season, Gun Runner was given a 5.10-1 chance in the Grade 2 Risen Star Stakes. He was impressive in his first two races, but the disappointing effort in his first stakes try left some bettors cold.

They didn’t have to be concerned. Florent Geroux kept Gun Runner in a good stalking spot most of the way, then angled him off the rail as they turned for home. He made the lead at the eighth pole, then held off the rally of longshot Forevamo for a half-length victory.

Gun Runner went on to win three more graded stakes that year, and finished third in the Kentucky Derby. However, he truly blossomed as a 4-year-old. In 2017, he won five graded stakes races, including four Grade 1s in a row. The year culminated with a front-running win in the Grade 1 Breeders’ Cup Classic, which sealed a near-unanimous Horse of the Year voting tally at the Eclipse Awards.