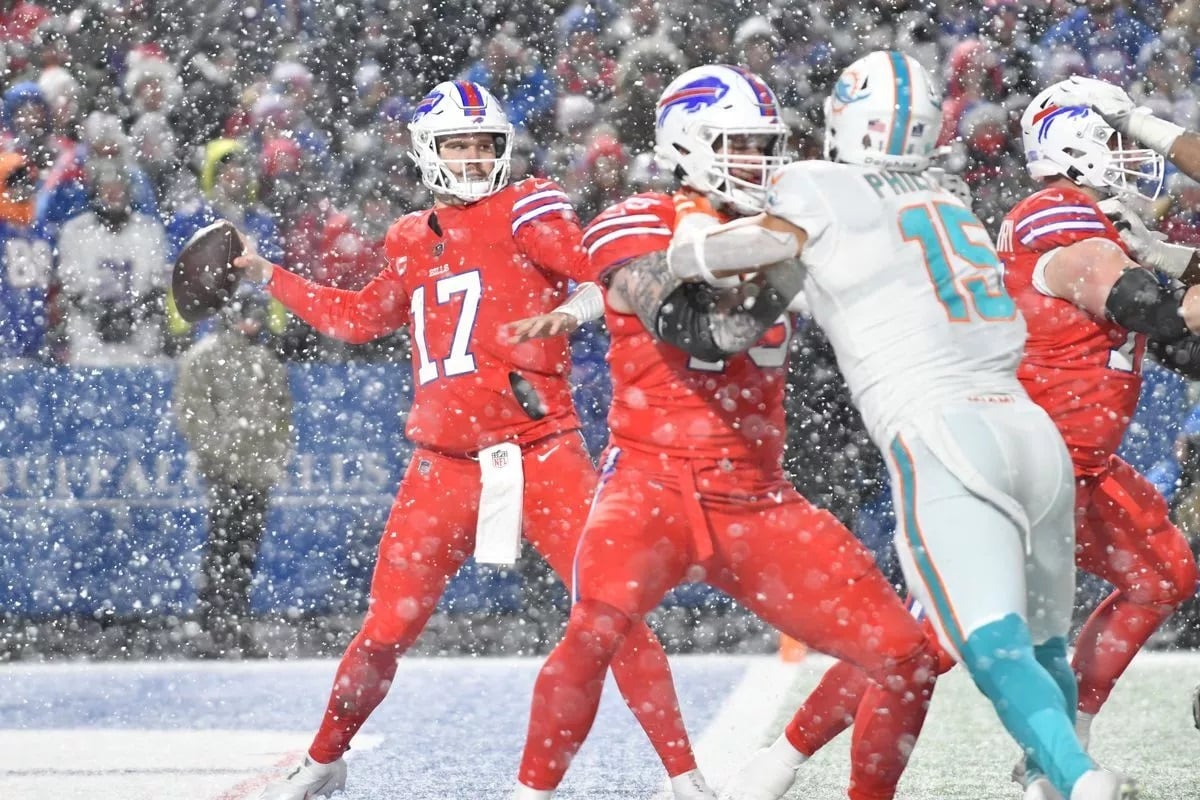 With three weeks remaining in the regular season, the Buffalo Bills are the consensus favorite to win Super Bowl LVII at +300 odds, and ahead of the rest of the top five teams on DraftKings’ futures board including the Kansas City Chiefs (+500), Philadelphia Eagles (+550), San Francisco 49ers (+650), and Cincinnati Bengals (+800).

Buffalo Bills quarterback Josh Allen drops back for a pass against the Miami Dolphins during a snow game in Week 15 in Orchard Park, NY. (Image: Getty)

The defending champion Los Angeles Rams are eliminated from postseason contention, and there will not be a repeat winner this season. The Bengals were year’s runner up at Super Bowl LVI, and they’re offering tremendous value at +800 odds.

Here’s your opportunity to lock in pre-Christmas prices, especially if you’re backing the chalk and the favorites at the top of the NFL futures board.

The Buffalo Bills have been a popular pick to win the Super Bowl the last couple of seasons with Josh Allen as their quarterback. However, the farthest they went in the postseason was a loss in the 2020 AFC Championship against the Kansas City Chiefs.

The Chiefs knocked the Bills out of the playoffs the last two seasons including last year’s AFC Divisional Playoffs. The Bills lost to the Chiefs in overtime in a game widely considered the greatest playoff game in modern NFL history.

If Hollywood writers could plot out this year’s playoff scenarios, the Bills and Chiefs would meet in the AFC title game once again. Except this time, the Bills beat the Chiefs in overtime this year  and then go on to win the Super Bowl.

The Bills won four-straight AFC Championships in the early 1990s and advanced to four consecutive Super Bowls, but they lost all four times. The Bills had not returned to the Super Bowl since the 1993 season when they lost to the Dallas Cowboys in Super Bowl XXVIII.

The Eagles have the best record in the NFL this season at 13-1. If the season ended today, the Eagles would earn the #1 seed in the NFC, yet they were never the outright favorite to win Super Bowl at any point this season.

The Eagles are currently the third favorite on the board at +550 odds behind the Bills. They were the second favorite at +400 odds before the Eagles revealed that quarterback Jalen Hurts sprained his throwing shoulder in Week 15.

The NFC Championship is somewhat wide open because the top two teams — the Eagles and Minnesota Vikings — are not as dominant as the trio of premier teams in the AFC with the Bills, Chiefs, and Bengals.

The Eagles were +2200 odds to win the Super Bowl in the preseason. They were the last undefeated team this season after an 8-0 start. At that point, their Super Bowl odds improved to +500. They fluctuated between +500 and +650 prior to last week before hitting a season-best +400 over the weekend.

With an injured Hurts, the Eagles saw their odds dip to +550 even though the team thinks this is not a long-term injury. The sprained shoulder could also deter some bettors from backing the Eagles this postseason.

The Kansas City Chiefs made two trips to the Super Bowl in the previous three seasons, but only won one championship with Patrick Mahomes. He might be considered the best quarterback in the NFL right now, but he only has one Super Bowl ring.

The Chiefs ran into a red-hot Cincinnati Bengals in the 2021 AFC Championship and failed to advance to a third-straight Super Bowl. Returning to the Super Bowl is not an easy task for the Chiefs with a deep pool of AFC teams that also includes the Bills and Bengals. They will most likely have to play and defeat both teams if they expect to lock up a trip to their third Super Bowl in the last four seasons.

The Chiefs were the only team, aside from the Bills, to be a favorite to win the Super Bowl during the regular season. After the conclusion of Week 11, the Chiefs and Bills were co-favorite at +450 odds. The Chiefs were outright favorites in Week 12 at +400 odds, which was their best number all season, before the Bills regained the top spot on the futures board.

The Chiefs are +500 odds to win Super Bowl LVII as the second favorite behind the Bills, but trending the opposite direction. Kicker Harrison Butker has been banged up all season, and he’s not a “money kicker” this season. Bettors are losing confidence in the Chiefs after they needed an overtime session to defeat the one-win Houston Texans in Week 15, who are the worst team in the NFL.

49ers Down to a Third-String QB

I doubt anyone could’ve predicted that the 49ers would be the fourth favorite to win the Super Bowl with a third-string, rookie quarterback at the helm.

Starting quarterback Trey Lance broke his ankle in the second game of the season. Backup quarterback Jimmy Garoppolo injured his foot in Week 13, but Brock Purdy came off the bench to lead the 49ers to a victory. Purdy took over as the starter in Week 14 and won his first two starts to help the 49ers extend their winning streak to seven in a row.

The 49ers improved to 10-4 and won the NFC West to secure an automatic playoff berth. There’s a chance Garoppolo returns in the postseason, but Purdy has looked good in his three appearances, so the 49ers feel comfortable if Purdy starts in the postseason.

The 49ers were +1200 odds to win the Super Bowl after Garoppolo went down, but improved to +650 this week after Purdy won back-to-back games and they clinched a spot in the playoffs.

Burrow and the Back-to-Back Bengals?

The Bengals were the surprise team in last year’s playoffs, but proved that any team can make a deep run in the postseason if they have a gunslinging quarterback. Joe Burrow and the Bengals upset the Chiefs in the AFC Championship and came close to knocking off the Los Angeles Rams in Super Bowl LVI.

Fans had mixed emotions coming into this season because they knew that it would be a tough task to improve upon last year’s success. Oddsmakers installed the Bengals as +2200 odds to win Super Bowl LVII, which were in the middle of the pack. The Bengals slipped to +3500 after Week 3, and then dipped again to +300 after their last loss against the Cleveland Browns in Week 8.

After a slow start and an injury to star wide receiver Ja’Marr Chase, the Bengals got their running game going to turn around their season. They snapped off a six-game winning streak and defeated the Chiefs once again and denied them a revenge win.

The Bengals’ championship odds improved steadily during their streak. You can now back the Bengals at +800 odds to win the Super Bowl, but they’ll have to beat the Chiefs and/or Bills in the AFC Playoffs if they expected to return to the Big Game.