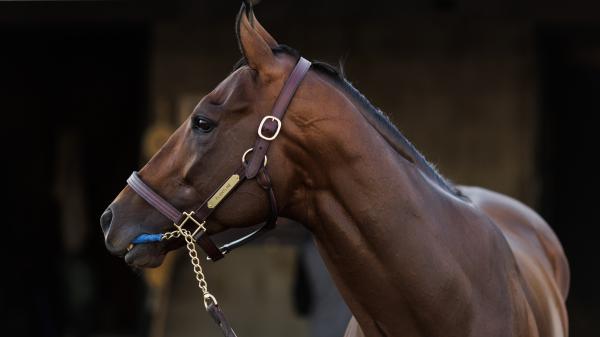 Undefeated four-time grade 1 winner Flightline has been on a steadily upward trajectory since days as a foal growing up on Jane Lyon’s Summer Wind Farm in Central Kentucky.

The bay son of Tapit grew up to a $1 million yearling at The Saratoga Sale, Fasig-Tipton select yearling sale in Saratoga Springs, N.Y., and began to justify his price when he won his debut at Santa Anita Park in April 2021 by 13 1/4 lengths. He next took down a $73,400 allowance-optional claiming race by 12 3/4 lengths before ending the year with an 11 1/2-length win in the Grade 1 Runhappy Malibu Stakes. His trainer John Sadler and the colt’s ownership group of Hronis Racing, Siena Farm, Summer Wind Equine, West Point Thoroughbreds, and Woodford Racing would keep him only in Grade 1 company for 2022.

“Since he ran his first race, the expectations were getting bigger and bigger,” recalled Bill Farish with Lane’s End, which welcomes the colt to it stallion roster for next year. “Every time you think he’s done everything he can do, he does something even more impressive the next time.”

“He hit all the major targets we were hoping for at the beginning of the year. The Met Mile was first major target. He hit that and came back and made an unbelievable first start running two turns in the Pacific Classic. That blew us all away,” he said, referring to Flightline’s 19 1/4-length romp in the Sept. 3 TVG Pacific Classic Stakes at Del Mar.

“We all imagined ways the horse could get beat, and in the Pacific Classic it was going two turns for the first time, and we made a bigger deal out of it in our minds than we should have because physically he looks like a two-turn horse and he is bred to be a two-turn horse, so there should not have been any doubt,” Farish continued. “But you get in the middle of your 4-year-old year and you’ve never gone two turns, it could be a hurdle. It wasn’t and that alleviated any concerns we had going into the Breeders’ Cup.”

Flightline put the exclamation mark on his dominate performances to date by turning away all challengers by 8 1/4 lengths in the Longines Breeders’ Cup Classic at Keeneland Race Course, which attracted seven other Grade 1 winners.

With nothing left to prove, Flightline is easing into the next phase of his career on that same trajectory.

“The only thing that has taken long is us; he adapted the first day here. He has been so relaxed and so intelligent about everything,” said Farish about the colt bred by Lyon out of graded stakes winner Feathered, multiple Grade 1-placed daughter of Indian Charlie. “We put all this padding in his stall and I don’t think he’s even licked it.”

Flightline’s first book of mares has been set at around 150, according to Farish, who added that the quality of mares submitted so far has been impressive. The stallion will stand for $200,000, the highest for an entering-year stallion since 2015 American Triple Crown winner American Pharoah in 2016.

“It will not be from a lack of quality mares if he doesn’t make it,” he said.

David Ingordo with Lane’s End Bloodstock added: “If a mare had a big telephone number price coming out of the November sale, she’s probably going to end up here after Feb. 15.”

The book so far includes Shamrock Rose, a 7-year-old daughter of First Dude who won the 2018 Breeders’ Cup Filly and Mare Sprint and was purchased by Japan’s KI Farm for $3 million at the Keeneland November Breeding Stock Sale out of Lane’s End’s consignment. The mare’s new owners will keep her in Kentucky to be bred to Flightline before she is shipped to Japan. Shamrock Rose is one of five to six mares bought by Japanese breeders at Keeneland who will be bred to Flightline before being shipped overseas, according to Farish.

“It will be great to see them spread his influence over there,” he said. “It is an unbelievable added benefit you get when you have a stallion with that international interest. We are seeing some European mares doing the same thing as well. I wish it was this easy with all the new stallions.”