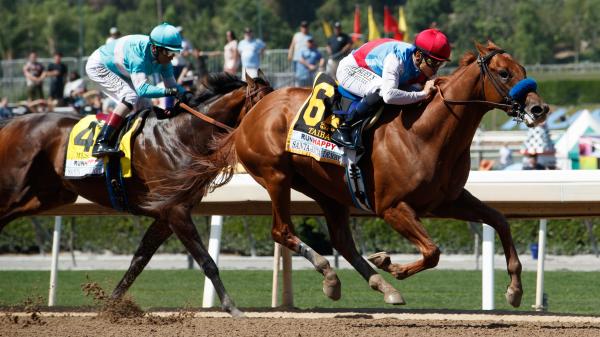 Taiba, a $1.7 million sale purchase, went from maiden winner to a major Grade 1 Kentucky Derby Presented by Woodford Reserve contender with a 2 1/4-length victory over Messier April 9 in the Grade 1 RUNHAPPY Santa Anita Derby. Amr Zedan, who owned 2021 Kentucky Derby first-place finisher Medina Spirit, also owns Taiba and had the confidence in his colt to jump him from a six-furlong maiden race to the 1 1/8-mile grade 1 event at Santa Anita Park.

The $750,000-guaranteed Santa Anita Derby, which in recent years has sent winners Justify, California Chrome, and I’ll Have Another to capture the Run for the Roses, was supposed to determine whether Forbidden Kingdom or Messier would be the West Coast’s best opportunity at victory beneath the iconic Twin Spires. Taiba was a surprising entrant in the race, and his trainer, Tim Yakteen, said a few days before the race that it was “going to be a bit of an ask” for the chestnut colt to win. But Yakteen also said that Taiba had been training forwardly and that “he has impressed very much in the morning.”

Forbidden Kingdom, the even-money favorite, went to the lead as expected under jockey Juan Hernandez, but not with the same domination he had shown in such earlier victories as the Grade 2 San Vicente Stakes and San Felipe Stakes. Messier, the 13-10 second choice, and jockey John Velazquez didn’t allow that to happen, sticking within a half-length or a length of Forbidden Kingdom through much of the early going.

Velazquez, who piloted Messier in his devastating 15-length triumph in the Feb. 6 Grade 3 Robert B. Lewis Stakes, also rode Taiba in his debut and elected to stay with Messier for the Santa Anita Derby. Veteran Mike Smith picked up the mount, being Zedan’s choice, according to Yakteen.

Smith kept Taiba close to the leading pair, two lengths back of Messier after Forbidden Kingdom completed the first quarter-mile in :23.23.

“I wasn’t in any hurry,” said Smith. “I felt the others would do the dirty work for me and it set up just fine.”

Forbidden Kingdom completed the first half-mile in :46.66, with Messier still in second. Messier launched his bid in the second turn, drawing even with Forbidden Kingdom approaching the quarter pole. Taiba, racing three wide in the turn, ranged up to challenge in the stretch, and once Messier put away Forbidden Kingdom, he had to deal with Taiba.

Taiba caught Messier approaching the final sixteenth, but his rival did not give up. Taiba simply proved better than the more experienced runner that day and ultimately drew off for the win, stopping the timer in 1:48.67. Messier was clearly best of the rest, with 10 lengths separating him from third-place Happy Jack. Armagnac finished fourth, followed by Win the Day and Forbidden Kingdom.

Smith paid tribute to Taiba’s performance, saying, “He showed just how special he is. He belongs with anyone.”

Smith has now won three of the last four editions of the Santa Anita Derby, taking it earlier with Justify in 2018, Roadster in 2019, and Honor A. P. in 2020. Justify went on to win the Triple Crown.

“It’s hard to actually verbalize what he just accomplished,” Yakteen said of Taiba’s performance. “You don’t see that at this level unless you’re just exceptionally, exceptionally gifted. Obviously, this horse has that type of talent because Messier ran absolutely super—lights out. That was a strong horse to collar.”

Yakteen took over the training of Taiba, Messier, and Armagnac not long before their previous trainer, Bob Baffert, began serving a 90-day suspension stemming from Medina Spirit’s positive test after last year’s Kentucky Derby. In the wake of the Medina Spirit situation, Churchill Downs last year announced that no horses in Baffert’s care would be eligible to earn points on the Road to the Kentucky Derby.

The Santa Anita Derby offers 100-40-20-10 points for the first four finishers. Thus, Taiba and Messier, who had no points going into the race, have earned enough to get into the Kentucky Derby. Tabia ranks eighth on the Kentucky Derby Leaderboard while Messier is 18th. Third-place finisher Happy Jack, who had 10 points going into the Santa Anita Derby, now has 30 points, putting him on the bubble to make the 20-horse field in spot 23.

Gary Young, who picked out Medina Spirit for Zedan as a 2-year-old for $35,000, bought Taiba as well. Bruce C. Ryan bred the son of Gun Runner —Needmore Flatter, by Flatter, in Kentucky. Buckland Sales consigned the colt to the 2020 Fasig-Tipton Kentucky Fall Yearling Sale, where Hartley/De Renzo Thoroughbreds purchased him for $140,000. Hartley/De Renzo pinhooked Taiba into the 2021 Gulfstream Sale, Fasig-Tipton’s 2-year-old select sale, where Young purchased him $1.7 million, the second-highest price of the sale.

When trained by Baffert, Taiba debuted March 5 in a six-furlong Santa Anita maiden special weight race. He went off as the 1-2 favorite and scored by 7 1/2 lengths.

Taiba is the only winner out of the young black-type winner Needmore Flattery, who was purchased by Yeguada Centurion for $195,000 from the Lane’s End consignment to the Keeneland November Breeding Stock Sale in 2019. She dropped an Uncle Mo filly in Ireland in 2020 that remains unnamed. -Tracy Gantz

Brooke Marie, one of the top female grass sprinters in Louisiana over the winter, has proven her chops in California.

With trainer Eddie Kenneally shipping the 6-year-old mare west to Santa Anita Park to compete against a short field in the $200,500 Grade 2 Monrovia Stakes the daughter of Lemon Drop Kid responded by running down pacesetting Alice Marble for a half-length victory.