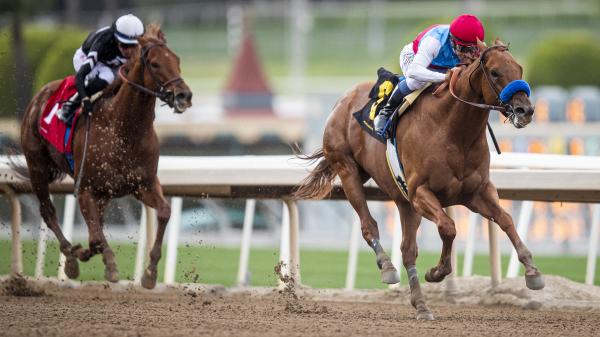 Taiba not only ran like a 2-5 favorite in winning the Runhappy Malibu Stakes at Santa Anita Park Dec. 26, he capped off an incredible day for trainer Bob Baffert. While Baffert has had many multiple winning days during his Hall of Fame career, he will remember this one for some time. Baffert had already won four races on Santa Anita’s opening-day card for the winter-spring “Classic” meet, including the La Brea Stakes with Fun to Dream and the San Antonio Stakes with Country Grammer (see below).

Taiba capped off a sensational five-win day for the trainer in the $300,000, Grade 1 Malibu, despite the seven furlongs being a shorter distance than he prefers.

“The further the better for him,” Baffert said.

To give Taiba more ammunition, Baffert put some quick drills into the Gun Runner colt, who hadn’t faced the starter since finishing third behind the older Flightline and Olympiad in the Nov. 5 Longines Breeders’ Cup Classic. That and jockey Mike Smith hustling Taiba out of the gate quickly set up Taiba for the win.

“He put him into the race right away – that’s not Taiba’s style,” Baffert said.

Baffert noted that Taiba has filled out and matured since the Breeders’ Cup, and the colt followed Smith’s instructions.

“That horse is like a bike, and you have to pedal,” Smith said. “Going long you don’t have to do it as much, but I knew that going short it would be tough.”

Shortly after the start, Forbidden Kingdom, a two-time graded stakes winner who likes to set the pace, went to the front. Taiba and Smith never let Forbidden Kingdom get too far ahead, running just a length back, while Straight No Chaser raced just to the outside of Taiba.

“I didn’t see the outside horse, and I decided not to take a chance and see what he was going to do,” Smith said. “Normally, I have to get aggressive with him at that point like I did in Philadelphia (when Taiba won the Grade 1 Pennsylvania Derby). But today that horse actually helped me.”

When Taiba reached the top of the stretch, it appeared that maybe he wouldn’t have the punch he needed, but that was an illusion. Taiba kicked in, pulling alongside Forbidden Kingdom, and then drew away to score by 4 ¼ lengths in 1:21.75. Forbidden Kingdom finished three-quarters of a length in front of third-place Hoist the Gold.

“At the top of the stretch, it almost looks like he’s gutted,” Baffert said. “But that’s the way he is. He’s very deceiving. If you watch him in the mornings, he’ll never get a clocker’s eye. He’ll surprise you in the afternoon.”

Then Baffert paid Taiba a high compliment by adding, “Silver Charm was the same way.” Baffert trained Silver Charm to win two-thirds of the 1997 Triple Crown en route to that colt being voted an Eclipse Award as champion 3-year-old male. Silver Charm was later inducted into the Hall of Fame.

Taiba in winning the Malibu made a strong pitch for an Eclipse Award himself, though Baffert declined to weigh in on the topic. Taiba’s primary competition is likely Epicenter, who won the Runhappy Travers Stakes and Jim Dandy Stakes and ran second in the Kentucky Derby Presented by Woodford Reserve and Preakness Stakes, but injured himself in the Breeders’ Cup Classic and did not finish that race.

“I don’t have a vote, and I respect the other people’s horses,” Baffert said. “It was unfortunate that Epicenter got hurt. We want it decided on the racetrack. Right now I’m just enjoying this.”

“He reminds me of his sire, Gun Runner,” Baffert said.

With his Malibu victory, Taiba is three-for-three at Santa Anita, following his debut win at six furlongs and then an eye-catching score in the Grade 1 Runhappy Santa Anita Derby in only his second start. Baffert won his fifth Malibu, following The Factor in 2011, Shakin It Up in 2013, McKinzie in 2018, and Charlatan in 2020. Smith has six victories in the race: McKinzie, Charlatan, and Taiba for Baffert, plus M One Rifle in 2009, Shared Belief in 2014, and Omaha Beach in 2019.

Stepped up to face Grade 1 company for the first time, Rhea Moon proved up to the challenge as she surged past four other 3-year-old fillies to post a victory by a head over stablemate School Dance in the $303,000 American Oaks, the closing race on Santa Anita’s Dec. 26 opening-day card.

The top two finishers are both trained by Phil D’Amato. Guided by Juan Hernandez, Rhea Moon completed the 1 ¼-mile test in 2:00.75 on firm turf to secure her third straight win and second straight graded stakes victory.

Campaigned by Rockingham Ranch and Talla Racing, Rhea Moon managed just a maiden win in her first half-dozen starts before finding her best stride to close out this season. She rallied from seventh to win an Aug. 21 allowance-level race at Del Mar. The daughter of Starspangledbanner then tried stakes company for the first time and delivered a clear victory in the Autumn Miss Stakes Oct. 29 at Santa Anita.

D’Amato decided to strike while the iron was hot, entering Rhea Moon in the field of 11 fillies for the American Oaks. She rewarded backers with $15.60 for a $2 win bet as the 6.80-1 third betting choice.

Salimah, a stakes winner for owner Stephanie Seymour Brant and trainer Chad Brown, was sent off as the 2.70-1 favorite in her first West Coast start. The daughter of El Kabeir secured the early lead and maintained that advantage to the top of the stretch before fading to seventh.

Rhea Moon boosted her career earnings to $371,831 with her fourth win in nine career starts.–Frank Angst

Among trainer Bob Baffert’s four entrants in the Dec. 26 $300,000, Grade 1 La Brea Stakes, he had the most personally invested in Fun to Dream, a filly he and his wife Jill co-bred and race with Connie Pageler.

The California-bred daughter of Juddmonte Farms’ late sire Arrogate, who Baffert also trained, had shown plenty of ability against a deep field of graded stakes-quality campaigners. She came into the first Grade 1 stakes run on Santa Anita’s opening day card with four wins from five starts.

Fun to Dream put her will to win on clear display again at the top of the stretch in the seven-furlong La Brea where she took command with Juan Hernandez in the irons and held off a late rally from Awake at Midnyte to win her first graded stakes by three-quarters of a length. The final time was 1:21.99.

“This horse is getting really, really good. She’s shown up in her last couple of starts,” Hernandez said. “Today, she was traveling very smoothly on the back side, and she broke sharp. Then after that, I felt like I had a ton of control. Turning for home I asked her to switch leads and pick it up, and she did the rest.”

The win was Baffert’s ninth win in the La Brea. He is the winningest trainer in the race’s history going back to 1976. Fun to Dream, the 2.70-1 second betting choice in the La Brea, improved her record to five wins in six starts with earnings of $426,590.–Eric Mitchell

Earlier on Santa Anita’s card, One More Bid kicked off the Classic Meet with a 16.50-1 opening-race upset, edging 1.70-1 favorite Balnikhov by a nose in the $200,000, Grade 2 Santa Anita Mathis Mile Stakes on turf. Ramon Vazquez was aboard the 3-year-old California Chrome gelding for trainer Ryan Hanson, who picked up his second career graded stakes win. One More Bid entered the race off of a maiden win by a neck at Del Mar.

After several solid efforts earlier this year in turf graded stakes, 4-year-old Dicey Mo Chara benefited from a good stalking trip to finally break through on the level, rallying under Juan Hernandez to defeat longshot Flashiest by a half-length in the $200,000, Grade 2 San Gabriel Stakes. The British-bred Adaay gelding scored as the 3.80-1 third choice for trainer Leonard Powell; 6-5 favorite Masteroffoxhounds finished third.

The third Grade 2 stakes on Monday’s card marked the return of Country Grammer, who won the $12 million, Group 1 Dubai World Cup Presented by Emirates Airline last March and finished third in three straight graded stakes over the summer and fall heading into opening day. The 5-year-old son of Tonalist retained top form in a big way in the $200,000 San Antonio Stakes, powering clear out of the far turn of the 1 1/16-mile race to score by a widening 4 ½ lengths over Stilleto Boy. Champion European jockey Frankie Dettori, who rode the Bob Baffert trainee in the Dubai World Cup, was aboard for the victory, his first mount of the day at Santa Anita, where he intends to ride in the early months of his final year in competition. Favored at 3-5, Country Grammer improved his career record to five wins in 14 starts with earnings of $11,277,320.