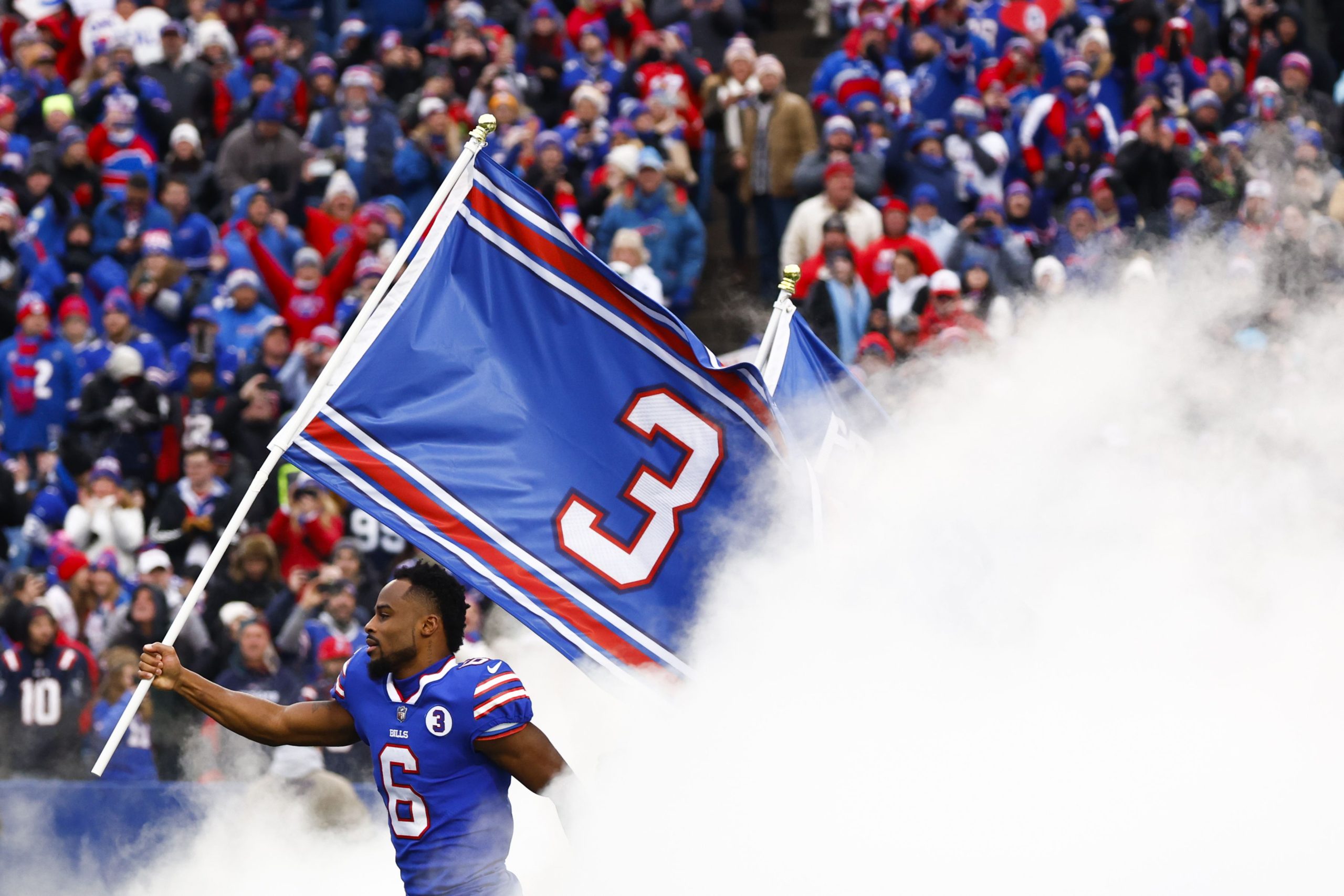 The Bills Rally On NFL Sunday, But Cheeseheads Aren’t Happy With the Green Bay Packers

The Buffalo Bills honored Damar Hamlin, now out of danger after suffering a cardiac arrest last Monday, with a victory against the New England Patriots on Sunday. That also allowed the Miami Dolphins to get into the playoffs six years after their last appearance.

Buffalo Bills wide receiver Isaiah McKenzie, as did all players, carries a banner displaying safety Damar Hamlin’s number onto the field. The Bills beat the New England Patriots on Sunday as Hamlin watched from his hospital bed. (Image: Syracuse.com)

On a day in which the Chicago Bears, the worst team in the league, got the first pick in the next NFL Draft, the playoff picture was almost completely in focus. There were only a couple of question marks remaining.

The Bills were already in, but the Green Bay Packers had their eyes firmly on one of the openings. The Detroit Lions, however, had other plans and pulled off a major – and embarrassing – coup.

The Bills, with Hamlin watching the game from his hospital bed, picked up an emotional 35-23 victory over the New England Patriots, guaranteeing them the number-two spot in the AFC. The Pats needed to beat Buffalo to earn a bye, but now will miss the postseason for the second time in three years after the departure of QB Tom Brady in 2020.

Special teams ace running back Nyheim Hines sparked an emotionally charged atmosphere, returning two kickoffs to the end zone. The first was on the opening kickoff for 96 yards, setting the stage for what was to come. The second was just as impressive, a 101-yarder in the third quarter.

Bills wide receiver John Brown added a TD of his own, his first in two years. Afterwards, he gave the ball to Denny Kellington, the team’s assistant athletic trainer and the man everyone celebrates for saving Hamlin’s life.

The Pats didn’t make it easy for the Bills, giving up the ball and having trouble pushing through the red zone. They also had several costly penalties, although New England fans weren’t happy the refs missed some calls, as well. Not that making them would have made a difference in the outcome.

Next weekend, Buffalo will host the Miami Dolphins, their divisional rivals, in the Wild Card round. The Fins beat the New York Jets on Sunday in a TD-less game, and it definitely wasn’t pretty.

There was a lot of tension until the last seconds of that game. The Dolphins, behind third-string QB Skylar Thompson, were facing elimination with 18 seconds left. However, on the final possession, they got within 50 yards and Jason Sanders connected on his third field goal of the afternoon. That was enough to give Miami an 11-6 victory and a ticket to the postseason.

Lions With The Upset Over the Packers

The Lions entered the game with no chance of advancing to the postseason because the Seahawks (9-8) defeated the Los Angeles Rams earlier in the day. A victory against the Packers would only be good for bragging rights.

Detroit can now brag from here to eternity. The Pack needed a win to see the postseason through a Wild Card spot, but the Lions showed character and left Lambeau Field with a major upset.

Green Bay, entering yesterday’s game on a four-game winning streak, were the dead-on favorites to win and advance. However, they ran into some trouble against a pride of Lions who were hungry for victory.

The game was very even until the last quarter. Detroit took a 20-16 lead with 5:55 left in the game following a pivotal TD for running back Jamaal Williams. That score set a franchise record for the most rushing touchdowns (17) in a single season, surpassing the legendary Barry Sanders (16 in 1991).

QB Aaron Rodgers returned to the field with plenty of time to spare to try to lead his team into yet another postseason. However, the veteran threw an interception, and the Lions didn’t give up the ball for the rest of the game. That brought Rodgers’ season (and, if there’s any truth to certain rumors, possibly his career) to an end.

The postseason lineup is now set, and this is what fans and bettors are looking at ahead of the first games next weekend: