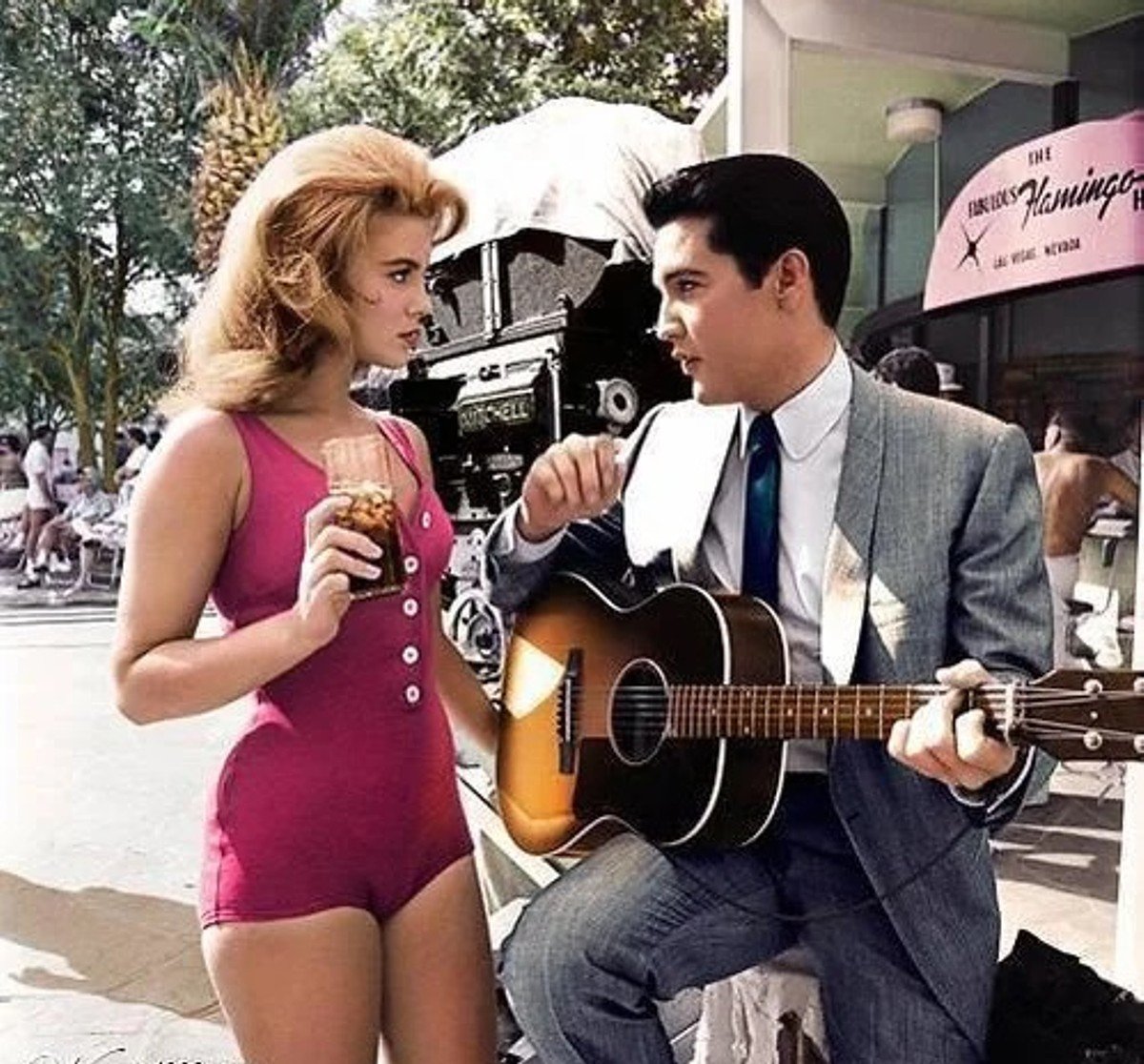 Elvis Presley didn’t put Las Vegas on the map, but he did insert an everlasting “Viva” in front of it. On what would have been the King’s 88th birthday, here’s a list of his favorite places to hold court in Sin City. Though Elvis’ spirit never left these buildings, most have since left us. But not all.

Though remodeled extensively to become the 1,600-seat International Theatre, this was once the showroom where Elvis Presley performed more than 600 concerts during his record-breaking seven-year residency. (Image: westgate.com)

On July 31, 1969, Elvis kicked off a seven-year residency at the International Hotel, which in 1971 became the Las Vegas Hilton and is now the Westgate. Elvis performed 636 consecutive sellout concerts, two per night, on a showroom stage that still exists.

Elvis earned $125,000 a week – back when tickets started at $15 – and set Vegas attendance records including the most consecutive sellout performances (58).

The Imperial Suite was demolished in 1995 to create three VIP “sky villas.” In 2012, the hotel changed hands and became the Las Vegas Hotel and then, in 2014, the Westgate. A statue commemorates the hotel’s Elvis association in the lobby.

Elvis Presley performs in 1956 at the New Frontier, during his first Las Vegas residency with (left) guitarist Scotty Moore and the Freddie Martin Orchestra. (Image: elvisechoesofthepast.com)

Elvis made his Vegas debut in the Venus Room here, over two weeks in April 1956. Called “the atomic powered singer” in advertisements, the 21-year-old was third-billed to orchestra leader Freddy Martin and Borscht-belt comic Shecky Greene.

By most accounts, Elvis bombed. The square Vegas crowds of the time didn’t know what hit them.

Recordings have surfaced, apparently from closing night, in which Elvis is heard telling the crowd, “We’ve had a pretty hard time … uh … had a pretty good time while we were here.”

Elvis serenades Ann-Margret during a scene in 1964’s ‘Viva Las Vegas’ filmed at the Flamingo pool the year before. In real life, Elvis performed for Ann-Margret at The Sahara. (Image: Reddit)

Elvis and his rowdy entourage occupied the top floor of the Alexandria Tower while “Viva Las Vegas” was shot around town in July 1963. It was here that the term “Memphis Mafia” was coined.

It was also here (in room 2542, the Presidential Suite) that Elvis loved the film’s co-star, Ann-Margret, tender. (Neither Elvis nor Ann-Margret ever publicly commented on their relationship.)

Unfortunately, the entire resort was stripped to its bones during its 2014 transformation to the SLS, an ill-fated boutique hotel experiment that lasted only five years.

“Viva Las Vegas” opens at a crap table here, where Elvis’ character wins enough money to enter the Las Vegas Grand Prix. Later, at the pool, he serenades Ann-Margret’s character with “The Lady Loves Me” before she pushes him off the diving board. (His winnings go, quite literally, down the drain.)

Today’s Flamingo is not the one built by Bugsy Siegel, however. The last remnants of the original were demolished in 1994. Even the pool has been drastically remodeled.

The Marjorie Barrick Museum of Art at UNLV is the university’s former gym. Here, on the same floor in 1963, Elvis danced with Ann-Margret. (Image: UNLV)

You can still walk the same floor that Elvis danced with Ann-Margret on. Four years after “Viva Las Vegas” was filmed here, UNLV built a new gymnasium, and its old one became the Marjorie Barrick Museum of Art. But the basketball court’s former parquet floor remains.

Elvis Presley marries Priscilla Beaulieu on May 1, 1967 at the Aladdin Hotel. (Image: eatervegas.com)

Originally, they were to wed at Elvis’ Palm Springs pad. But when unruly reporters began gathering there, an 11th-hour plan was hatched to thwart them.

The hotel was imploded in 1998. A larger Aladdin opened on the site in 2000. That resort has been known as Planet Hollywood since 2007.

The former Villa D’Este was the only Vegas restaurant Elvis patronized during his seven-year International/Hilton run. In the ’70s, the Italian eatery was owned by chef Joe Pignatello, personal Las Vegas-based chef for Frank Sinatra and good friend to reputed mobster Sam Giancana.

Usually, Elvis would have Pignatello up to the Imperial Suite to prepare steak and mashed potatoes. Occasionally, Elvis and his entourage would dine out, occupying the private dining room on top of Piero’s.

A bloated shell of his former self, Elvis faced his final Las Vegas curtain at the Hilton on Dec. 12, 1976, eight months before dying at Graceland. (Image: YouTube)

The pharmacy at the Landmark Hotel provided an unhealthy portion of the prescription narcotics that eventually did Elvis in.

Elvis dropped more than half a million dollars here, according to the 2006 book “Las Vegas Babylon” by Jeff Burbank. He would have a local doctor fill out a prescription, then go down and pick it up. When Elvis was at the Hilton, the drugs were walked across the street to Elvis’ suite. But even when he wasn’t, the Landmark would send them to Graceland or wherever Elvis was.

Mostly the packages contained Valium and a powerful pain reliever called Dilaudid, which Elvis injected himself with in liquid form. (The Landmark also provided syringes.)

Elvis married Ann-Margret here, at least for the “Viva Las Vegas” cameras. Moved three times since, the wooden chapel then stood where it was originally built in 1942: on the grounds of the Frontier.

Elvis preferred driving to Vegas from either Graceland or his houses in Beverly Hills. He didn’t like flying. But when he went back to touring, there was no time for driving.

Beginning in 1969, Elvis always began his Vegas sojourns at then McCarran Airport’s exclusive Hughes Flights Services terminal for private planes, from which a limo would whisk him to the International. (Built in 1948, this was the airport’s original terminal.)

This statue honoring Elvis Presley stands inside the lobby of the Westgate. (Image: westgate.com)

In 1975 and 1976, the private plane Elvis disembarked was the Lisa Marie. Named after the King’s seven-year-old daughter, the four-engine Convair 880 was purchased from Delta Airlines for $250,000 and tricked out for three times as much. (Even the bathroom fixtures were gold-plated — down to the soap dishes).

Since Elvis’ Vegas stays were extended, the Lisa Marie – now on permanent display across the street from Graceland – was always flown back to its Memphis hangar to avoid McCarran’s rental fees (perhaps the only money-saving activity Elvis ever engaged in while here).

The Howard Hughes Terminal was razed in 1995 to build the current Signature Terminal.