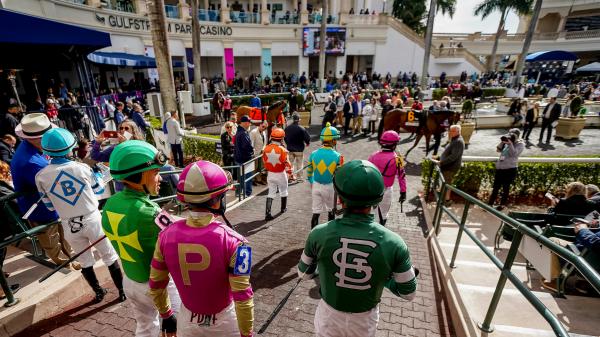 The First, Best Horse Race to Bet On in 2023: Pegasus World Cup

Newly turned 4-year-old Cyberknife may be the headliner, but he certainly is not the only star attraction lined up to make his next start in the $3 million Pegasus World Cup Invitational Presented by Baccarat on Saturday, Jan. 28 at Gulfstream Park. A full field is being assembled to challenge Cyberknife, and the result is a highly anticipated renewal of the rich Grade 1 event that figures to be a bonanza for handicappers and bettors.

The race everyone comes to see however, is the Pegasus, which will be run for the seventh time in 2023. The 1 1/8-mile race on the main track for 4-year-olds and older will attract the best older horses in the country who are not making the trip to the Middle East for races such as the Saudi Cup.

Most of the people reading this will look forward to watching and wagering on Pegasus day simulcasting, but for those that can attend the race, Pegasus race day will also be one of the social events of the season in South Florida. Several musical guests have been lined up for the day, including a performance by One Republic.

The horse to beat will be Cyberknife, who will be making his final career start in the Pegasus before heading off to his next career as a stallion. Cyberknife has five wins, four seconds, and a third in 12 lifetime starts coming into the race for career earnings of $2,087,520. He scored two Grade 1 wins in his 3-year-old campaign in 2022 in the Arkansas Derby at Oaklawn Park and the TVG.com Haskell Stakes at Monmouth Park, and he comes off a second-place finish in the Big Ass Fans Breeders’ Cup Dirt Mile in his most recent start, where it took a monumental effort from Cody’s Wish to beat him. Cyberknife will look to follow in the footsteps of his sire, Gun Runner, who concluded his racing career with a win in the 2018 Pegasus World Cup.

It’s not uncommon for standout horses to come back and make one final January start in the Pegasus before ending their careers and doing so has produced mixed results. If you are a handicapper on team Cyberknife, you are hoping for a result like Gun Runner’s. Knicks Go was not as successful, however in the 2022 running of the Pegasus. The 2021 Breeders’ Cup Classic winner returned to make one final career start in last January’s Pegasus, but was not able to go out a winner. He was defeated by 2021 Breeders’ Cup Dirt Mile winner Life Is Good in a race that launched a stellar 2022 campaign for Life Is Good.

There will be no shortage of horses challenging Cyberknife, and unlike Cyberknife, the rest of the field will be looking to kick-off their 2023 campaigns in grand style. A Pegasus win would give any of the other horses a leg up in the older dirt male division to begin the year.

The horse on top of the list of contenders is Proxy, who ended 2022 by posting his best career win in the Grade 1 Clark Stakes Presented by Norton Healthcare. Another Grade 1-winning probable Pegasus starter is Art Collector, who has won 10 of his 20 career starts for lifetime earnings of $2,332,490, including victories in the 2021 Woodward Stakes and the ’21 and ’22 runnings of the Grade 2 Charles Town Classic.

Defunded, a Grade 1 winner trained by Bob Baffert is expected to ship in from Southern California after having won the Grade 1 Awesome Again Stakes over Country Grammer at Santa Anita two races ago. He also won the Grade 3 Native Diver Stakes at Del Mar in his most recent start. Another fascinating possible entrant is Law Professor, who won the $150,000 Queens County Stakes by 7 ½ lengths at Aqueduct on Jan. 7. You might remember Law Professor as the horse who gave Life Is Good a run for his money in the 2022 Woodward Stakes.

As you would expect, there will also be a sizable home team based at Gulfstream Park that has targeted the Pegasus World Cup. The two most promising contenders from this group include Skippylongstocking, who looked good winning the local prep for the Pegasus in the Grade 3 Harlan’s Holiday Stakes on Dec. 31; and White Abarrio, who has lost five times in a row dating back to the 2022 Kentucky Derby. White Abarrio is a 4-for-4 Gulfstream Park “horse for the course,” including a victory in the 2022 Curlin Florida Derby Presented by Hill ‘n’ Dale Farms at Xalapa.

The Pegasus World Cup Turf is a $1 million Grade 1 race in its own right. That race will be headlined by Colonel Liam, who won it in 2021 and 2022 and will be going for a three-peat.  He is expected to be challenged by a field that may include Speaking Scout, Ivar, Shirl’s Speight, City Man, Decorated Invader, and Master Piece.