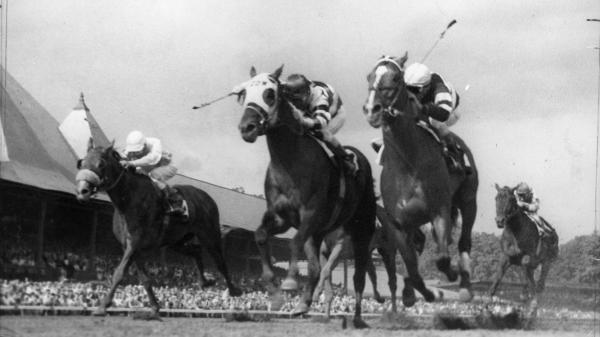 The Unforgettable Showdown in the 1962 Travers

There’s nothing that stirs the heart and emotions of a horse racing fan more than a thrilling homestretch battle between two gallant Thoroughbreds. Photo finishes, many so close that only the camera can separate two unwavering rivals, are among the most exciting and breathtaking elements of the sport.

Saratoga has seen it’s fair share of photo finishes, including the 2009 Woodward Stakes, when the magnificent three-year-old filly Rachel Alexandra held off Macho Again by a head to score an unforgettable victory. But it is doubtful that any photo finish can ever compare to that of the 1962 Travers Stakes, when Jaipur and Ridan engaged in an unprecedented battle that saw them cross the wire a nose apart after dueling for the entire 1 1/4-mile race.

Coming into the 1962 Travers, both colts were highly decorated. Jaipur had been among the best 2-year-old colts in 1961, winning the Flash Stakes, Hopeful Stakes, and Cowdin Stakes during a successful campaign that saw him finish first or second in all seven of his races. The following year, he started off strong with easy wins in the Gotham Stakes and Withers Stakes at Aqueduct before finishing a surprising 10th as the favorite in the Preakness Stakes. Undeterred, Jaipur bounced back 11 days later to win the Jersey Derby via disqualification of a rival that impeded him, and that race served as a perfect prep for the Belmont Stakes, which Jaipur won by a nose.

But for all of Jaipur’s accomplishments, Ridan’s record was even more impressive. As a 2-year-old, he had gone unbeaten in seven starts, with the prestigious Washington Park Futurity and Arlington Futurity among them. Although a minor injury ended his season prematurely, he was still voted champion 2-year-old colt by Turf and Sports Digest magazine.

Like Jaipur, Ridan achieved strong success during the first half of his 3-year-old season. After winning the Florida Derby and Blue Grass Stakes during the spring, he could only finish third in the Kentucky Derby as Blue Grass Stakes runner-up Decidedly turned the tables, but Ridan was back at his best in the Preakness Stakes, finishing second by a nose while leaving Jaipur far behind.

After that brief encounter, the two colts went their separate ways, with Jaipur winning the Choice Stakes at Saratoga (a race similar to the modern-day Jim Dandy Stakes) and Ridan triumphing in the Arlington Classic before finishing second in the American Derby.

That set the stage for a showdown in the Travers Stakes.

Then, as now, the Travers was considered the “Mid-Summer Derby”; a race where the best 3-year-olds from earlier in the year could come together to settle supremacy of the division. Ridan and Jaipur would break together from post positions one and two and, although they would face five other rivals, none ever got close enough to significantly challenge the one-on-one duel that would soon unfold before the eyes of the 26,000 fans in attendance.

The horses left the starting gate at 4:48 p.m., and Jaipur was the fastest into stride, followed closely by Ridan. Immediately, the two colts began to pull clear of the field, and after the first two furlongs had been run, Ridan was leading Jaipur by a half-length, with none of the others closer than five lengths behind.

At first glance, the pace fractions weren’t all that eye-catching — opening quarter-mile in :23 4/5, four furlongs in :47 2/5 — but as Jaipur moved up to within a head of Ridan’s lead, with the rest of the field still five lengths back, it was clear that numbers couldn’t begin to describe the intensity of the battle. But what the numbers could reveal is that instead of slowing down, Ridan and Jaipur were gaining speed; the second quarter-mile had been run in :23 3/5, faster than the first, and the third quarter went in the same time, leading to a testing six-furlong fraction of 1:11 flat.

It was then, with Ridan still leading narrowly, that Jaipur made his move. As they rounded the far turn and approached the homestretch, Jaipur tenaciously gained a few inches on his rival and thrust his head in front through a mile in 1:35 2/5. A challenger named Cyane made a bold run to try and get involved, coming within a half-length of the dueling leaders, but couldn’t sustain his momentum and began to tire as the horses entered the Saratoga homestretch.

Once again, Jaipur and Ridan were alone, with virtually nothing between them. Jaipur, digging deep, maintained his advantage and began to grow his lead for a few brief moments; Ridan, fighting back, refused to yield and regained precious ground in the final furlong.

Under the circumstances, with both colts running like champions and eyeballing each other for the entire 1 1/4 miles, it was a shame that they couldn’t finish in a dead-heat. But as the wire approached, Jaipur found a little something extra, and as they flashed across the finish line, Jaipur’s neck was extended — reaching outward, fighting for victory — and he was a nose in front of Ridan.

So spectacular was the race that the Daily Racing Form result chart made special note of Jaipur and Ridan’s epic battle, saying “Jaipur raced on even terms with Ridan from the break and they continued as a team in a torrid duel. Jaipur, on the outside of Ridan, had a slight lead at the quarter pole and won narrowly in a race in which neither horse gave way. Ridan, showing brilliant speed, was unable to shake off Jaipur while saving ground throughout. He raced courageously to the end and was beaten narrowly in a thrilling duel.”

The final time of 2:01 3/5 equaled the Saratoga track record and was the fastest Travers ever run to that point in time. For Jaipur, the race would mark his final victory, although he did finish second in the Woodward Stakes and Roamer Handicap later in the year, which was enough to secure him the title of champion 3-year-old colt. Ridan would also go winless for the remainder of the year, but during an abbreviated season in 1963, he won two of three starts, including a 3 ¾-length victory over Jaipur in the Palm Beach Handicap at Hialeah Park.

In the scheme of legendary horses, Jaipur and Ridan have never been ranked among the all-time greats. However, on that summer day at Saratoga, they stamped their legacies by running one of the all-time greatest races in the history of the sport.

Editor’s Note: This story was first published in 2016 and has been updated.