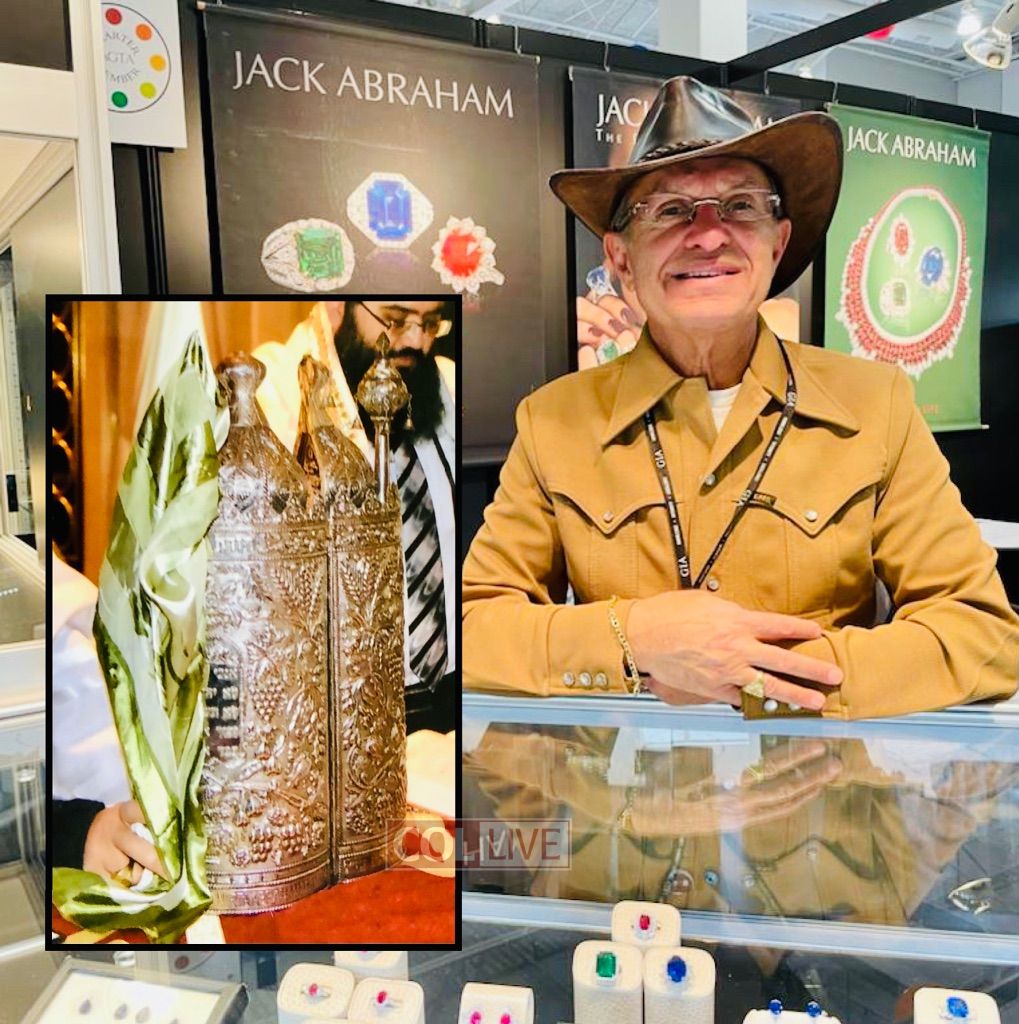 The recent return of a stolen Torah scroll is being described as a Las Vegas miracle. It comes just hours before the start of the Jewish new year.

Jack Abraham, pictured above, in earlier photo. He was able to get back his Torah scroll, left, which was stolen from The Venetian. (Image: COLlive)

The Torah, which has the handwritten text of the five books of the Hebrew Bible, was stolen on June 12 from The Venetian on the Las Vegas Strip.

On Friday, Las Vegas Metropolitan Police Department (LVMPD) officers said the Torah was discovered behind an unidentified building over a month ago, KVVU, a local TV station, reported. The woman who found the scroll recently took it to the LVMPD.

The scroll’s owner, Jack Abraham, a New York-based jeweler, recently upped the reward for its return from $10,000 to $40,000. He said no questions will be asked if it was returned. It has great sentimental value for him and his family.

Local police turned the Torah over to a local rabbi. He was to bring it to Abraham.

When speaking to KVVU, Rabbi Mendy Harlig of Chabad of Henderson, Nev., called the Torah’s return a “miracle” — especially that it was given to authorities just hours before the Jewish new year, known as Rosh Hashanah. The holiday begins at nightfall on Sunday.

Starting on June 8, the Torah was kept inside a large convention room where some 400 religiously observant Jews prayed and read from the sacred text during a Las Vegas jewelry trade show: the JCK Las Vegas. It is North America’s largest yearly jewelry trade event.

So far, no one was arrested for the Torah’s theft. If someone is arrested, the suspect could be charged with grand larceny, KLAS, another local TV station, reported.

A possible suspect was seen on surveillance footage released over the summer by the LVMPD. It appears he placed the Torah in a suitcase with wheels and left the complex.

He is believed to be between his 20s and 30s, and is about 5-feet, 11-inches to 6-feet, 2-inches tall, according to the LVMPD. The possible thief was wearing a black hat, green shirt and dark pants at the time.

Over the summer, Abraham revealed the thief tried to sell the scroll, the Jewish Week, a New York-based publication, reported.

For some 25 years, Abraham regularly took the scroll to the annual jewelry convention and it was used in religious services. Abraham also used it in many key events in his family’s life and brought it when he visited such locations as Moscow and Israel.

“It’s been to Israel for my grandson’s bar mitzvah, it’s been at the weddings of my son, my daughters and brit of my grandkids,” Abraham said, according to KSNV. On the Torah are engraved the names of his children, grandchildren and other relatives.

It has a tremendous amount of meaning for the family and all those people that depend on it from all those years,” Abraham has said. “You feel the spirit of Shabbat wherever we have the show because of this Torah.”

Abraham is president of Congregation Anshei Shalom, an Afghan synagogue and community center in Jamaica Estates, Queens, N.Y. His family is originally from Afghanistan.