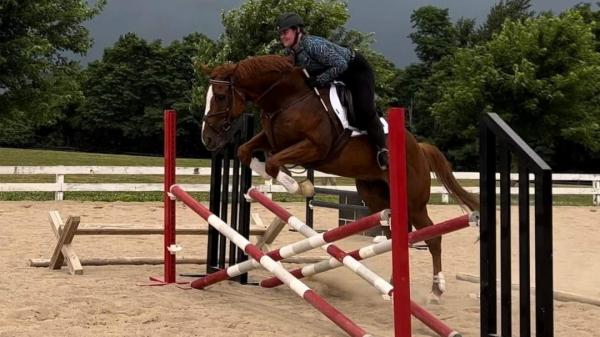 Thoroughbred Makeover Diary: What a Difference a Day Makes!

After Oak Hill (Odin) and my first show, I sat down to look at the schedule of local shows and map out a path that concluded with the Thoroughbred Makeover in October. I had tentatively done one very early on, but now that I knew more about Odin and had a show under our belts, I reworked the first draft of the schedule and was feeling very good about the path I had laid out, which included a handful of recognized dressage shows starting mid-July. But as Robert Burns famously said, “the best-laid plans of mice and men often go awry.” And nowhere is that truer than in dealing with horses.

The month of June was supposed to be a bit of a dressage boot camp to prepare us for our recognized debut, but when a friend organized a clinic with 5* Eventer Dominic Schramm on June 17-18, I was having a really hard time saying no to the opportunity.

The problem was that I hadn’t really don’t a lot of jumping with Odin and I wasn’t sure there would even be a place for us in a clinic, where I assumed most people were coming with at least some partly seasoned horses. After talking to a handful of people who had ridden with Dom in the past and the organizer, who assured me all levels were welcome, I bit the bullet and signed up for what I started calling the “Barely Jumping and Just Happy to Be Here” group.

In signing up for the clinic I knew I had to make a choice. Clinics aren’t cheap and neither are recognized Dressage shows. I knew if I was going to do the clinic, I at least needed to do a little more work at home over cavalettis and cross rails. While that certainly can be used in cross training for Dressage, I also knew that would take time away from the issues I was most concerned about in Dressage. I knew the dressage show would benefit us more for the Thoroughbred Makeover but I knew riding with a 5* rider and getting a great introduction to jumping would benefit us for our life after the event. When I thought about it that way, the choice was easy. Recognized dressage can wait, the jumps were calling!

I started Day 1 of the clinic nervous but mostly excited and in a really good headspace to give both Odin and me some grace. We were new to this, and we were here to learn. Despite all that, Day 1 was what can only be described as a disaster. I say that laughing now, but I was most certainly not laughing as Odin refused even the most basic cavalettis that we most certainly had done a million times at home and then decided that cross rails where not all that fun either.

To add insult to injury, a major storm began moving in partly through the lesson, which ultimately got cut short as we all literally ran for cover. On the plus side, Odin proved that he can trot quickly down a gravel road in sideways rain and strong winds and deliver us both safely to the cover of a strange barn and hang out quietly in what sounds like an actual hurricane. So that was a plus — the only plus from Day 1, but a plus nonetheless.

Day 2 started with beautiful weather and as I tacked up, I was shocked to find myself not nervous at all. I mean, how could things go worse? It was quite literally only up from here. Right away, Odin seemed happier – more relaxed and less fussy in the bridle. As we were warming up, I thought that I at least had a more rideable horse today and that was a victory in itself.

As the exercises started Odin was still a little hesitant, but unlike the first day I was able to work him through it much faster and without much drama. Soon enough, he was confidently doing the exercises like I thought he was going to do them on Day 1. I think he even shocked Dom with his 180-degree attitude change and willingness to try on Day 2.

By the end of the day, we were jumping small skinny vertical lines, full courses, and confidently getting through some of the trickier exercises. Odin definitely isn’t a horse that just took to jumping right away: he doesn’t just blindly say yes at whatever you point him to, but he does think critically and once he understands better the task at hand, he is perfectly happy and confident to go do it.

As someone who has ridden a lot of “point and shoot” horses to jumps, I found that I actually appreciated the fact that Odin said no when he didn’t understand. It gave me so much confidence when he did understand that he really understood and was doing his best to keep both of us safe and happy.

I was so glad that I had signed up for both days of the clinic and that both Odin and I kept showing up and trying, despite what looked far from perfect. I had such a big smile on my face at the end of Day 2 and decided the next clinic we maybe could do the “Slightly Jumping and Just Happy to Be Here” group.

We learned so much from Dom, and a lot of that was what we need to work on going forward … and most of it isn’t jump related. Odin showed me that he still isn’t very respectful of my leg and that his balance at the canter, while improving, still needs a lot of work. I am looking forward to getting back in the Dressage tack and working on these things throughout July.

I set a goal early on of being able to get through our Thoroughbred Makeover Dressage test, at least roughly, by August and I think we’re still on path for that. For now, I’m going back to the calendar and working on a third draft of show schedules as we get closer and closer to October and the Thoroughbred Makeover!