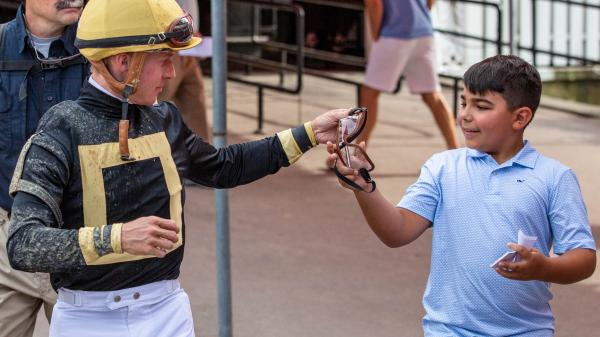 Time to Rip: The Moto Origins of Jockey Dylan Davis

Dylan Davis banked his mount into the turn, asking for more, he let the caged speed loose, feeling the acceleration down in his bones. There was sheer unadulterated horsepower underneath him, and once again, it was going to be another drive to the finish. The only roadblock was a final double.

Wait, a double? As in two mounds of dirt, some 50-feet high? What were they doing in a Thoroughbred race on the flat?

Davis wasn’t traversing the Belmont Park turf course or facing the chill down the stretch at “The Big A.” Instead, it was a flashback long before his jockey prowess was established around the ovals of the New York Racing Association (NYRA). This was the world of motocross.

At the age of 9, his father, Robbie Davis, gave him his first motorbike, and he was sold. Once high school dawned, he had graduated to a Honda CR85, which if you know anything about the sport of motocross, then you know that is a pretty serious piece of hardware — 2 stroke, liquid-cooled engine. “It went 50 to 60 miles per hour,” Davis said, “and when you are 16 years old that means you can rip.” And he did.

What started out as “just practicing” in the neighborhood, turned into a passion for Davis. He spent those teenage summers in Saratoga Springs, N.Y., where his dad, a well-known jockey on the NYRA Circuit, kept horses.

“We lived across the street from my best friend, Kevin Uebrick, and his dad built us this crazy course that we could practice on,” Davis explained.

It was loaded with challenges, including jumps and turns that put both boys through their paces.

In those early years, Davis learned quickly about timing, and how the throttle control was both a friend and an enemy. The Uebricks would alter the course once the face of a jump was mastered or a gap was successfully cleared. When the time came to design a new one, the bulldozer would be out.

Davis got used to sporting protective gear, wearing a helmet and body armor, and, of course, he understood that crashes were just part of being aboard such a powerful instrument.

“I think it honestly gave me a toughness,” the jockey said. “I really began to understand how to get back up and not be afraid to go again.”

Motocross is a series of bike races that take place off-road with multiple participants. All-dirt courses are littered with different kinds of jumps at varying heights, and they are spaced sporadically. Straightaways are few in number, so you have to regulate your speed.

Unlike in horse racing, leaders will lap those that are placed toward the rear — the backmarkers — which can lead to dangerous situations unto themselves. The stamp of a seasoned rider is one who can pick a line, and regulate the speed of the bike accordingly. Like a jockey, when you choose the right geometry, it can make your approach more efficient and keep you out of traffic trouble.

Davis rode in roughly 20-some-odd races while in high school, and even though he never visited the winner’s circle, he taught himself a “racing versatility” that has stayed with him over this past decade as a jockey. During his very first contest, he was second-to-last, with only his buddy Uebrick behind him. He wanted to beat him to an upcoming turn, but as he approached the next jump, he throttled-up too quickly. Falling backwards off his bike, he landed hard on the ground. “Kevin comes right over me, and planted one of his tires on my chest,” Davis said with a big grin, “I went to the ER with his tread emblazoned across me.” Luckily, the x-rays were negative; he was just sore.

Facing down quads, rollers, and roosts (the kickback of dirt and rocks that fly in your face), forced Davis to mentally prepare several moves ahead. It was like playing speed chess, while screaming aboard a wooden roller coaster. Knowing the throttle sensitivity and understanding how to calibrate it, all the while being aware of your surroundings, was the key.

“I have always loved the tactics and the speed,” Davis explained, “but when I outgrew that bike, my dad said there was no way I was going to get a 125 … too dangerous a class.”

A decade ago, Davis started as a “bug,” the racing term for an apprentice jockey. He always loved Thoroughbreds, since they go fast, too (around 35 mph), but it wasn’t going to be an easy transition.

“When I first showed up at the barn to ride, I was shifting my weight, just like I would on a bike taking a turn,” Davis said with a laugh. “I looked at my dad and he asked what the heck I was doing?”

Eventually, he shed some of those moto habits, but the toughness that he built at the Uebricks remained.

Once he made the switch from motorbike to equine, Davis attended Hall of Fame rider Chris McCarron’s prestigious jockey school in Kentucky. He has a pair of sisters who are also jockeys, Jacqueline Davis and Katie Davis-McCarthy (Katie’s husband is rider Trevor McCarthy), which make the business a true family affair. With the sage advice of agent Mike Migliore, it has all come together. Davis says with this great flicker in his eye, “All your experiences add up, and once you get into the techniques, that’s when you can really make the strides that can help you get to the next level.” He went on to ride at the same tracks his father did, namely, NYRA’s Aqueduct, Belmont Park, and Saratoga Race Course, as he searched to find his niche.

With more than 8,600 races behind him, Davis is poised for another personal best in earnings when 2022 wraps. The milestone moment came when he won the riding title this past winter at Aqueduct. Then for an encore, he ended up just a win short behind Irad Ortiz Jr. for the Belmont summer prize. After celebrating some nice wins at hyper-competitive Saratoga, Davis is poised to return to Aqueduct. That track hosts the September-October Belmont meet, while NYRA undertakes a major tunnel construction.

Despite raising an eyebrow ever so slightly, Davis will not be taking his old bike over to “Big Sandy” to scale those giant mounds of dirt that they are moving around. He is just a recreational racer with his kids these days. Still, those moto origins are valuable. After a spill in 2021 left him sidelined with a broken collarbone, the jockey returned stronger and ready for action. Just like he did during his motocross days, Dylan Davis got back on the horse.

Once again, it was time to rip and pass them all.