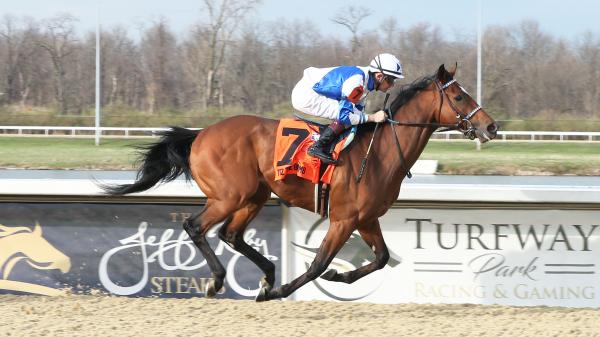 Prior to the April 2 $600,000 Grade 3 Jeff Ruby Steaks, there had been talks of a possible Qipco Two Thousand Guineas bid for Magadela Racing, Lesse’s Tiz the Bomb. However, dreams of roses might beckon the son of Hit It a Bomb after his explosive 2 1/4-length victory Saturday afternoon at Turfway Park.

After a failed debut effort on the dirt, trainer Kenny McPeek stuck the flashy bay on the turf, where he rolled to three successive wins capped by a graded tally in the Grade 2 Castle & Key Bourbon Stakes and a game runner-up finish to Modern Games in the Grade 1 Breeders’ Cup Juvenile Turf. A proven commodity on the turf, Tiz the Bomb struggled home in seventh in Gulfstream Park’s Grade 3 Holy Bull Stakes in February. Whether it was the effects of the three-month layoff or a general distaste for the dirt, Tiz the Bomb was sent back to McPeek’s Silverleaf Hills Training Center in Ocala to regroup.

Shipped up to Kentucky, Tiz the Bomb resurfaced with a gallant score in the March 5 John Battaglia Memorial Stakes in his first foray over the synthetic surface. The colt continued to flourish leading up to the race, turning in two sub :48 half-miles over the Keeneland track in preparation for the Jeff Ruby.

“He’s really special,” said McPeek. “He just clicks along he does his work, he has good energy, eats good, and he’s just a real pleasure to be around.”

Tiz the Bomb, favored at 8-5 in the 11-horse field, was unhurried early away from the gate and settled into a three-wide position in midpack down the backstretch under jockey Brian Hernandez Jr. Dowagiac Chief sprinted to take command and led the charge through lively opening splits of :23.25 and :47.06. It was past the half-mile pole where the bomb began to detonate, and Hernandez was a mere passenger as the colt mowed past horses into the far turn and struck the front at the top of the lane with the six furlongs clocked in 1:11.38.

Repelling a challenge from Peachtree Stable’s Tawny Port at the eighth pole and with Bataglia runner-up Stolen Base nowhere in sight, Tiz the Bomb cruised to the wire in a hand ride, stopping the timer in a solid 1:48.60 for the 1 1/8-miles.

“He was the best horse today,” said Hernandez after the race. “We were a little wide but I was never really concerned about it because he was traveling like he was the best horse. When I called on him turning for home he switched leads and went on about his business like we thought he would.”

Rich Strike, sent off at odds of 26-1, rallied from last to get up for third, 3/4 of a length in front of the pacesetting Dowagiac Chief.

Longshot Optigogo was pulled up around the turn and vanned off.

With his Jeff Ruby triumph, Tiz the Bomb collected 100 points towards the Kentucky Derby, solidifying a starting slot on the first Saturday in May, should his connections choose to go that route. He currently sits in the third position on the Road to the Kentucky Derby leaderboard with 110 total points.

“It’s going to be interesting (going forward),” said McPeek. “He didn’t handle the sand in his face in Florida but of course that’s a different surface. From what we do from here on will be interesting; we have a lot of options. I do think he’s a better grass horse than he is a dirt horse. There’s some time and we don’t have to make a decision right away and when we do we’ll make the best one.”

McPeek signed the ticket for Tiz the Bomb as a yearling for $330,000 at the 2020 Fasig-Tipton Selected Yearlings Showcase from the Eaton Sales consignment. The colt was bred in Kentucky by Spendthrift Farm and is the third foal out of the winning Tiznow mare Tiz the Key, who foaled a filly by Gormley this term. Tiz the Key is also the dam of an unraced 2-year-old Free Drop Billy filly named Bel Rosso and a yearling Mor Spirit colt.

One race before the Jeff Ruby, Candy Raid stunned the field with a sweeping victory at 52-1 in the $250,000 Bourbonette Oaks.

The former $25,000 claimer trailed the 12-horse field through the opening first quarter in :23.69 and still had only one foe beaten past a half-mile in :47.59 before powering into high gear around the turn, sweeping past every one of her rivals in a dizzying rally to clear the field by open lengths midway down the stretch. Jockey Rafael Bejarano wrapped up on the daughter of Candy Ride as the pair finished 4 1/2-lengths in front under the wire.

A dead heat ensued for place honors between Tap Dancing Lady and Catiche, while North County was a neck further back in fourth.

Candy Raid earned 50 points towards the Grade 1 Longines Kentucky Oaks and currently sits in a tie for eighth on the Road to the Kentucky Oaks leaderboard with 51 points.

Tap Dancing Lady and Catiche registered points for their placings as well and stand in ties for 17th and 18th respectively on the Oaks leaderboard.

Bred in Kentucky by Stonestreet Thoroughbred Holdings, Candy Raid is out of the stakes winning, graded stakes-placed First Samurai mare Lady Samurai. The dam of four winners from four to race, including Last Samurai (Malibu Moon), the victor of the Dec. 11 Poinsetta Stakes at Oaklawn Park. Candy Raid was picked up by Don’t Tell My Wife Stables for $35,000 as a yearling at the 2020 Keeneland September Sale.