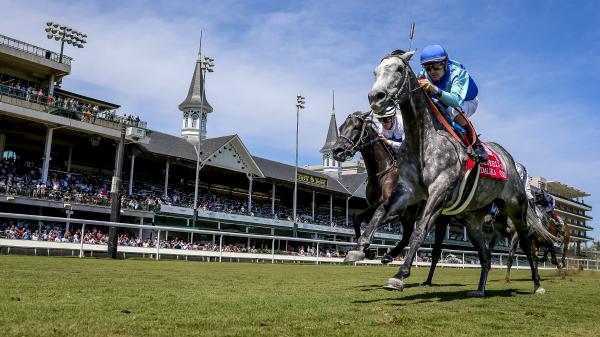 North American buyers know they are taking big gambles when they acquire runners from overseas through private purchases. It can be difficult to tell how they will acclimate and at what level of competition they can be effective.

Paul Varga of Bal Mar Equine took his chances when he obtained Dalika late in her 2-year-old season. She had made three starts in Europe, winning an allowance race in Dresden in October 2018.

Varga has been amply rewarded. The 7-year-old daughter of Pastorious has finished first or second in 17 of 31 starts. She broke through for her first Grade 1 victory in the Beverly D. Stakes last August at Churchill Downs and boasts 10 wins overall in earning $1,441,586.

Dalika has swept three of her last four races. She followed her game half-length score in the Beverly D. with a victory in the Sept. 10 Kentucky Downs Ladies Turf Stakes. She continued a pattern of never running well at Keeneland with a perplexing sixth-place finish in the Nov. 5 Fall Harvest Stakes before rebounding to capture the Grade 3 Cardinal Stakes on Nov. 24 at Churchill Downs with a front-running effort for jockey Brian Hernandez Jr.

PEDULLA: How was Dalika acquired?

STALL: It was the owner, Paul Varga. He always kept an eye on Europe. Case Clay has got great connections with agents and basically everybody over in Europe. They just kind of found this horse on replays quite a few years back now and made them an offer and they said ‘OK.’ It was kind of that simple.

PEDULLA: What was she like when she came to you? How has she progressed?

STALL: She was always big, strong, super sound, a very hearty German type of horse. She is a tough horse to deal with on a day-to-day basis and maybe that is why you can see some inconsistencies in her form. Earlier in her career, there were races we thought she would be extremely live in and she didn’t show up.

PEDULLA: She has won three of her last four starts. Has she gotten better with age?

STALL: As she got older, she got a little bit better. I think what has gotten her to where she is today is two things. We gave her the whole winter off last year in South Carolina. That helped her. And we train her off track, where there is not much traffic. She was at a training center called Skylight, which is outside of Louisville. She seems much better in a tranquil setting. The hustle and bustle of a racetrack, that was too much for her to handle and she got super aggressive. We had to take that out of her game and I think that’s allowed her to step up to the next level.

PEDULLA: Where is Dalika now?

STALL: We shipped her down to Florida about a month ago before the really cold stuff hit Kentucky. We wanted to get the acclimation done. We didn’t want her to go straight from Kentucky to Florida at this time of year.

PEDULLA: Where is she in Florida?

STALL: She’s at a training center in Ocala.

PEDULLA: So, you’re always trying to find the most serene setting for her?

PEDULLA: When you say she’s tough to handle day to day, can you provide a few examples?

STALL: Not in the barn or the stall. When she’s on the racetrack during training, she gets very, very aggressive. That’s the way she is. She’s a very tough horse.

PEDULLA: Is that part of what makes her good?

STALL: Well, the thing is, it doesn’t bother her. None of that takes anything away from her. Being strong and maybe doing a little too much in the morning, it doesn’t really hurt her. She never loses weight and she’s always been sound. That’s just her personality. She just kind of wants to run off most of the time.

PEDULLA: Would you expect her to go to the lead in the Filly & Mare Turf?

STALL: What you see on the front end is kind of what we deal with on a daily basis, wanting to be forward like that and very stubborn about giving it up. It’s really good in the afternoon.

PEDULLA: Do you expect her to be the primary speed?

STALL: Going two turns on the grass, it’s going to be hard for a horse to top her. You’d basically be killing your chances by doing that. In football, they say the fullback or running back is running downhill. When she starts running downhill, about 100 yards after she leaves the gate, it’s just stay out of her way.

STALL: We love our chances. We are very, very happy with her. She’s super fit. We’re just keeping her happy and maintaining her. It’s her grand finale. Win or lose, she’s going out on a pretty high note.