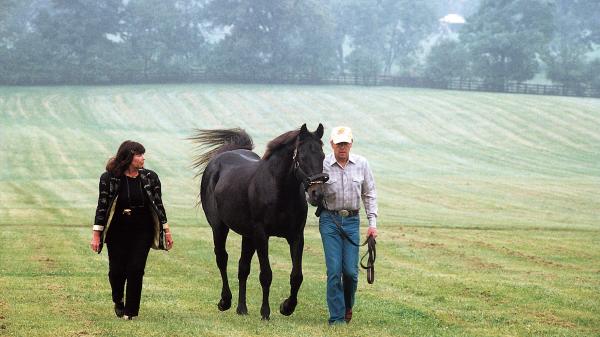 In a plain brown wrapper, the yearling colt did not leave the same impression that struck those closest to Secretariat when he was that age. With a fair pedigree and a front leg that toed out, he did not pass muster with one sales company and instead was relegated to the upstart alternative. But this would not deter fate. Neigh. Instead, the long-legged colt with an awkward stride was available for a price far below what he would eventually be worth.

Fortunately for him, four young owners were looking for the right horse for their nascent venture, scooping him up and adding him to their hopes. What he brought them was the stuff of dreams.

By the time My Charmer was ready to breed, Bold Ruler was gone. The sire of Secretariat had died of cancer in July 1971, but he had left behind several good sons for those seeking his bloodlines. However, restaurateur Ben Castleman’s budget for My Charmer was limited and the book for his initial choice, Jacinto, was full. Instead, Claiborne’s Seth Hancock suggested Bold Reasoning, a grandson. The price of $5,000 was right. The stallion had a decent record on the racetrack, winning the Jersey Derby and the Withers Stakes. Castleman was sold.

My Charmer was a stakes winner, taking the Fair Grounds Oaks in 1972, and her foal with Bold Reasoning was her maiden pregnancy. The daughter of the Castleman’s foundational mare Fair Charmer, her pedigree also included Reine-de-Course Myrtlewood, passing winning genes to her new foal. He arrived at a reasonable hour on Feb. 15, 1974, just after dinner and early enough for the two to be moved out of the foaling stall to make room for the next mare due. It would take the better part of an hour for the colt to steady his newborn legs enough to nurse.

Once he did, he showed precocity that hinted at what was to come. As the young horses played in the field, My Charmer’s colt did not have the smoothest of strides, the others running so easily that he looked instead like an awkward teenager who needed time to grow into his body. Whenever the feed tubs were filled, though, he would be the first across the 13-acre paddock to stick his nose into the grain. In time, the unnamed colt joined his fellow yearlings in a ritual common across the Bluegrass. It was time to visit the sales ring.

Upon inspection, the prestigious Keeneland sales team declined to add My Charmer’s colt to their book for the upcoming yearling sale. His pedigree was that of a new stallion with crops yet to race and a maiden broodmare with a workmanlike career. In addition, the plain brown yearling was not as attractive as some of his peers. His right foreleg angled outward slightly from the knee, a conformation flaw called ‘toeing out.’ His head was coarse and not as sculpted, lacking the elegance sought by the Keeneland inspector.

Fasig-Tipton, the New York-based sales company, had recently expanded into Kentucky. Its July yearling sale featured the horses that did not make it into Keeneland’s September book, but nevertheless the usual names were ringside as My Charmer’s colt stepped into the lighted arena. Whether new to the game or part of the old guard, everyone was looking for something from the slate of young horses passing through. One of those was Mickey Taylor.

The Washington native had his eyes on the colt that partner Dr. Jim Hill, a veterinarian, had identified in his walks around the sales barns. Hill had returned to the colt three or four times, noting his balance and size as well as the developed shoulder and the musculature that promised speed. He passed his notes along to Taylor, who would buy multiple yearlings that day. But this one was the one they wanted. How high would they have to go to get him?

Taylor had made his money in the logging business, benefitting from a paper shortage that allowed him and wife, Karen, to go from living off her flight attendant salary to investing in racehorses. The couple was not Whitneys, but they had the means necessary to pursue the colt in the ring. The Hills, Jim and Sally, had befriended Mickey and Karen when they sought Jim’s advice about horses as early as 1973. By 1975, they were partners in Wooden Horse Investments, sending horses out to either New Mexico or New York depending on their progress.

As the bidding started, Taylor kept his eye on the ring, on the colt circling nervously under the lights. $3,000. Then $5,000, progressing upward gradually. The bids were incremental, but the hope beneath each flick of Taylor’s hand was not. Castleman wanted at least $15,000 for My Charmer’s first foal. At $17,500, Taylor signaled the spotter closest to him. The auctioneer surveyed the room, looking for $18,000. No takers. The gavel resounded on the lectern.

With that, the colt that would become Seattle Slew fell to a logger, a flight attendant, a veterinarian, and a businesswoman, who would later be christened as the Slew Crew. Together with trainer Billy Turner, the team would go on a journey that would take them from the sales ring to the winner’s circle, a crown of immortality their reward for their faith in My Charmer’s colt.

Before going into the 1977 Triple Crown undefeated, before a career that put him into the Racing Hall of Fame came that day in the sales ring. The flick of Mickey Taylor’s hand was the turning point that sent the awkward colt on the path toward immortality not only on the racetrack but also in the breeding shed. In his three seasons on the racetrack, he was a champion every year, the first undefeated Triple Crown winner.

His legacy on the racetrack was complimented by his prowess in the breeding shed. From Landaluce to Swale to A.P. Indy, Seattle Slew left his mark on the pedigree of the American Thoroughbred, a lasting tribute to a great horse with humble beginnings.