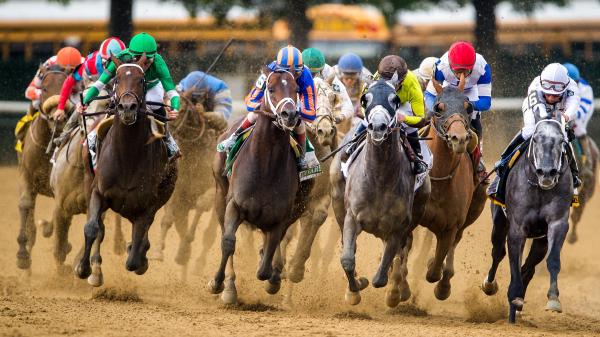 Using History as a Guide to Analyzing the 2022 Belmont Stakes

Held at the testing distance of 1 1/2 miles, the Belmont Stakes is one of the most challenging Grade 1 races to handicap each year. It’s not uncommon for longshots to visit the winner’s circle, and the betting payoffs can be massive. When 24.75-1 longshot Ruler On Ice led a group of unheralded runners across the finish line in 2011, the $2 superfecta returned $74,052.

Fortunately, analyzing the recent history of the Belmont can point us toward tips and trends to make handicapping the race a little easier. Let’s dig in and define the profile of a typical Belmont Stakes winner using eight general rules:

Some handicappers assume the 1 1/2-mile distance of the Belmont Stakes is beneficial to deep closers, giving them more time to catch up. But the truth is quite the opposite. Since 2010, only three horses (Essential Quality, Sir Winston, and Creator) have rallied from the back half of the pack to win the Belmont Stakes. Furthermore, 13 of the last 15 Belmont winners were racing within 4 1/2 lengths of the leader after the opening half-mile, so it’s safe to say you don’t want to fall too far off the early pace in the Belmont.

Note: As part of a Triple Crown season restructured due to COVID-19, the 2020 Belmont Stakes was contested at 1 1/8 miles.

Alumni from the Grade 1 Kentucky Derby Presented by Woodford Reserve have enjoyed the most success in the Belmont Stakes, winning 12 of the last 20 editions. Notably, nine of those 12 went directly from the Kentucky Derby to the Belmont without any other race in between.

Belmont contenders exiting the Peter Pan: Golden Glider and We the People.

It might come as a surprise, but the Preakness Stakes — the second leg of the Triple Crown — hasn’t been a very productive Belmont steppingstone in recent years. Over the last 20 years, only three Preakness starters (Afleet Alex, American Pharoah, and Justify) have come back to win the Belmont; notably, all three won the Preakness, and American Pharoah and Justify swept the Triple Crown.

To put it another way, half of the last 14 Belmont winners started at 11-1 or higher, suggesting thinking outside the box with longshots is a better strategy than relying on favorites.

The Belmont Stakes is often kind to unproven runners who have yet to taste victory at the graded stakes level. Over the last 15 years, six Belmont Stakes winners entered the race without a previous graded stakes victory to their credit, most recently Sir Winston in 2019.

Five of those six had placed at the graded stakes level, so they weren’t complete unknowns. But you definitely don’t have to be a proven Grade 1 winner to vie for victory in the Belmont.

Hall of Fame jockey Mike Smith has won the Belmont Stakes three times since 2010, more than any other jockey during that timeframe. One of Smith’s winners was 4-5 favorite Justify, who led all the way to complete a sweep of the Triple Crown. But Smith has also guided the 13-1 longshots Palace Malice (a pace-tracking type) and Drosselmeyer (a mid-pack closer), so Smith’s mounts warrant respect under any and all circumstances.

This record alone is impressive, but wait, Pletcher’s statistics get even better. Since 2006, he’s also saddled half a dozen Belmont runners-up and a trio of third-place finishers. In short, 24% of Belmont Stakes trifecta finishers since 2006 have been trained by Pletcher, a remarkable stat indicating Pletcher has emerged as the dominant trainer in the Triple Crown’s final jewel.

Pedigrees matter in the Belmont Stakes, and sons of sprinters rarely prevail in the 1 1/2-mile classic. Indeed, 14 of the last 15 Belmont winners were sired by stallions who won Grade 1 races going 1 1/8 miles or farther. Class and stamina are prerequisites for success in the Belmont, and the progeny of stallions who excelled at high levels running long are more likely to visit the winner’s circle.

It’s difficult to find a Belmont contender who fits all of the historical trends we’ve outlined, but a few horses come reasonably close.

One of the most appealing candidates is the filly Nest, fresh off a runner-up effort in the Grade 1 Longines Kentucky Oaks. As a daughter of 2007 Preakness winner and two-time Horse of the Year Curlin (previously the sire of Belmont winner Palace Malice) out of a mare sired by 1992 Belmont winner A.P. Indy, Nest has the pedigree to thrive racing 1 1/2 miles.

Nest is trained by Todd Pletcher, who saddled Kentucky Oaks winner Rags to Riches to beat males in the 2007 Belmont. And while Nest rallied from behind a quick pace in the Kentucky Oaks, she’s employed stalking tactics in the past and has enough tactical speed to be forwardly placed in the Belmont. There’s a lot to like about Nest’s chances.

We the People is another logical threat. He’s a son of Constitution, a two-time Grade 1 winner racing 1 1/8 miles and the sire of 2020 Belmont winner Tiz the Law. We the People is 3-for-4 so far and looked like a star when wiring the Peter Pan at Belmont last month by 10 1/4 lengths. We the People brings serious tactical speed to the table and can’t be dismissed as a front-running threat.

Golden Glider previously showed tactical speed when tracking the pace to finish fourth in the Grade 1 Toyota Blue Grass Stakes at Keeneland, and as a son of 2004 Breeders’ Cup Classic winner Ghostzapper, Golden Glider has a reasonable chance to stretch out to 1 1/2 miles. Trainer Mark Casse upset the 2019 Belmont with longshot Peter Pan runner-up Sir Winston, and it’s not impossible to imagine Golden Glider repeating the feat. He’s never won a graded stakes and is very likely to start at double-digit odds, so he fits for the formula for an enticing longshot play.

On the other end of the spectrum, which well-regarded contenders might be vulnerable in the Belmont Stakes? One possibility is Rich Strike, the 80.80-1 upset winner of the Kentucky Derby. Rich Strike is a pure deep closer who benefited from chasing a historically fast pace in the Derby, so his running style isn’t necessarily geared toward success in Belmont.

Much the same can be said of troubled Kentucky Derby fifth-place finisher Mo Donegal, the deep-closing winner of the Grade 2 Wood Memorial Stakes Presented by Resorts World Casino. Mo Donegal does have Todd Pletcher in his corner, but Mo Donegal’s sire — Uncle Mo — failed to win a Grade 1 race at 1 1/8 miles or farther.

Good luck with your handicapping, and enjoy the Belmont Stakes!