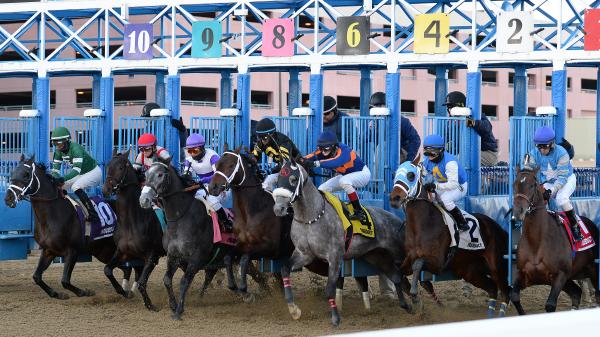 First run in 1953, Saturday’s $300,000, Grade 3 Gotham Stakes at Aqueduct has long ranked as a significant stop on New York’s road to the Kentucky Derby Presented by Woodford Reserve.

The Gotham has frequently changed distances and dates, but that hasn’t stopped it from compiling an impressive roster of winners highlighted by Hall of Fame inductees Native Dancer (1953), Dr. Fager (1967), Secretariat (1973), Easy Goer (1989), and Lure (1992).

Currently held over one mile, the Gotham awards Kentucky Derby qualification points to its top four finishers on a lucrative 50-20-10-5 basis. Handicapping the Gotham can be tricky, but by analyzing its history, we can identify key trends and tendencies to help sort out the contenders.

Without further ado, let’s dig in and analyze half a dozen stats worth keeping in mind:

Generally speaking, U.S. dirt racing plays in favor of speed horses. But over the last decade, not a single horse has won the Gotham in gate-to-wire fashion.

That’s not to say speed horses haven’t enjoyed some success; Weyburn (2021), Mischevious Alex (2020), and Hansen (2012) were all racing in second place after the opening half-mile. But late runners charging from midfield or farther behind have won six of the last 10 editions of the Gotham, suggesting closers have a better chance than you might expect at claiming first prize in the Gotham.

Although Weyburn sprung a 46.75-1 upset in the 2021 Gotham, such longshot winners are uncommon. The last decade has seen five favorites prevail in the Gotham, while four other winners started at single-digit odds.

All told, double-digit longshots have accounted for only six of the Gotham’s 30 top-three finishers since 2012, suggesting that the betting public usually analyzes the race correctly.

The last decade has seen only two types of horses win the Gotham. Local runners exiting races at Aqueduct have won the Gotham six times, while Florida shippers traveling north from Gulfstream Park have accounted for the other four Gothams.

The Gotham isn’t very kind to unproven up-and-comers, instead favoring runners with established form against tough competition. Six of the last 10 Gotham winners (Mischevious Alex, Enticed, El Kabeir, Samraat, Vyjack, and Hansen) had previously won a graded stakes, while another had placed against graded stakes company. During the same timeframe, only one horse exiting a maiden victory (Weyburn) has claimed top honors in the Gotham.

A strong recent race is encouraging

Sons of sprinters haven’t had the best luck in the Gotham. Nine of the last 10 Gotham winners were sired by a stallion who won a Grade 1 race running one mile or farther. The only stallion to break the rule was Noble Causeway, sire of 2014 Gotham hero Samraat. But even Noble Causeway placed in the 1 1/8-mile Grade 1 Florida Derby and contested the Grade 1 Kentucky Derby, so the overall trend holds true.

The field for the Gotham has yet to be finalized, but judging from the probable starters, there aren’t any horses who perfectly match the typical profile Gotham winner. That means we’ll have to pick and choose which historical trends to emphasize in our handicapping.

One of the closest matches to the historical profile is possible Gotham betting favorite Rockefeller, the only proven graded stakes winner in the prospective field. A speed horse capable of sitting off the lead if necessary, Rockefeller won the Grade 3 Nashua Stakes on the New York circuit last year before returning to his home base in California, where he kicked off 2022 with a runner-up effort in the Grade 3 Sham Stakes at Santa Anita Park.

The fact Rockefeller has already won at the graded stakes level is significant, and as a son of Medaglia d’Oro (a six-time Grade 1 winner running 1 1/8 miles or longer), Rockefeller fits most of the historical trends we’ve outlined. True, he’s a speed horse rather than a closer, but that shouldn’t be a deal breaker. And granted, Rockefeller isn’t an Aqueduct local or a Gulfstream shipper, but California raiders are uncommon in the Gotham, so we can’t judge their winless streak since 2012 too harshly.

If, however, you choose to prioritize the Aqueduct-or-Gulfstream angle, Morello is likely the horse you want to play. A son of 1 1/16-mile Grade 1 Breeders’ Cup Juvenile winner Classic Empire, Morello is 2-for-2 at Aqueduct, winning his debut before dominating the Feb. 6 Jimmy Winkfield Stakes by five lengths.

Morello has tactical speed, but he’s less of a pacesetting type than Rockefeller, so Morello’s running style should be a good fit for the Gotham. He’ll also be a short price in the betting. Aside from the fact he’s unproven against graded stakes company, Morello is an ideal fit for the historical profile of a Gotham winner, suggesting he may hold a slim advantage over Rockefeller on Saturday.

Good luck with your handicapping, and enjoy the Gotham!