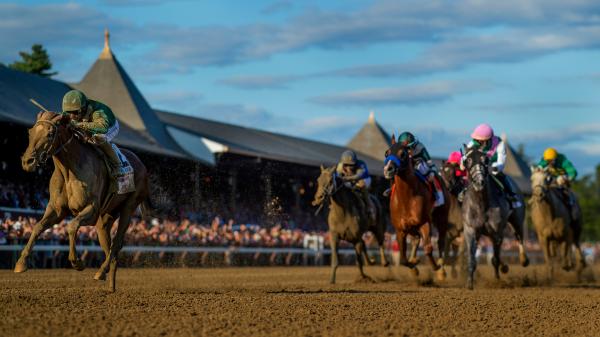 The historic $1.25 million, Grade 1 Runhappy Travers Stakes at Saratoga Race Course dates all the way back to 1864, which means it is older than the Kentucky Derby Presented by Woodford Reserve, Preakness Stakes, and Belmont Stakes Presented by NYRA Bets. It annually attracts some of the best 3-year-old Thoroughbreds in the country and is practically a fourth leg of the Triple Crown. You don’t want to miss Saturday’s renewal of the 1 ¼-mile “Mid-Summer Derby.”

The Travers is often a tricky race to handicap. Its rich purse and great prestige combine to attract a wide variety of horses from around the country, ranging from established stars to exciting up-and-comers.

If you are wondering which types of horses are more likely than others to visit the Travers winner’s circle, you’ve come to the right place. A deep dive into the history of the Travers reveals trends and tendencies uniting past winners, and we can use these data-driven gems to our advantage when handicapping the race.

Let’s crunch the numbers and review our findings:

Any running style can win the Travers

No single running style has a clear-cut advantage in the Travers. The race often attracts a large field, which can – depending on the year – favor pace setters, deep closers, or any style in between.

Speed certainly isn’t a disadvantage in the Travers. We’ve seen two gate-to-wire winners since 2010 and five winners that have rallied from second or third after the opening half mile, but we’ve also seen horses like Code of Honor, V. E. Day, Will Take Charge, and Afleet Express rally from mid-pack or even farther behind to reach the winner’s circle, suggesting the right horse can prevail with any running style.

The Travers typically draws a strong group of alumni from the Triple Crown races, but horses with Triple Crown experience aren’t unbeatable in the Mid-Summer Derby. Seven of the last 13 winners started in a Triple Crown race, but the remaining six did not. This suggests up-and-comers are almost as likely as established spring stars to claim victory in the Travers.

Avoid the Haskell winner (and even Haskell starters)

The prestigious Grade 1 TVG.com Haskell Stakes, held at Monmouth Park one month prior to the Travers, seems like a perfect steppingstone toward the Mid-Summer Derby, but among the last 13 Travers winners, only Keen Ice prepped in the Haskell, finishing second. The last horse to win both races was Point Given in 2001, indicating the Haskell is not typically a productive prep for the Travers.

New York has long been an epicenter of high-class summer racing, and since the Travers takes place in the Empire State, it’s not surprising to see local runners dominate the proceedings on a regular basis. Eight of the last 13 Travers winners (62%) prepped for the race in New York, as did 20 of the last 36 trifecta finishers (56%). On three occasions in the last decade, New York runners ran 1-2-3 in the Travers.

The Grade 2 Jim Dandy Stakes at Saratoga has been an especially successful steppingstone toward the Travers. Since 2010, five Jim Dandy starters have gone on to win the Travers, including three horses (Stay Thirsty, Alpha, and Essential Quality) who won both races.

Favorites have performed reasonably well in recent editions of the Travers, with four betting favorites visiting the winner’s circle since 2010. That includes the last two winners, Tiz the Law and Essential Quality.

A strong field is shaping up for the 2022 Travers Stakes. No fewer than four of the prospective starters are Grade 1 winners, and two secured their signature victory in a Triple Crown race. The classic winners are Kentucky Derby hero Rich Strike and Preakness winner Early Voting, but neither are coming off good finishes in their last start. Rich Strike was last seen finishing sixth in the Belmont Stakes, and Early Voting most recently came home last of four in the Grade 2 Jim Dandy. The last horse to win the Travers after missing the top three in his previous start was Sea Hero in 1993, so Rich Strike and Early Voting will have to defy nearly three decades of history to visit the Travers winner’s circle.

Along similar lines, history indicates Haskell starters are unlikely to vie for victory in the Haskell, which is a blow to the chances of Haskell winner and Kentucky Derby participant Cyberknife.

So which horses are favored by history to win the Travers? One to consider is Epicenter, the Jim Dandy winner. Epicenter is remarkably versatile in terms of running style and performed well in the Triple Crown when finishing second in the Kentucky Derby and Preakness. The one knock on Epicenter’s Travers chances from a historical perspective is the fact his sire, Not This Time, failed to win a Grade 1 race and did not even compete in a race at 1 1/8 miles or farther.

This means the most likely Travers winner might be Artorius, winner of the Curlin Stakes at Saratoga last month. The son of record-shattering 2016 Travers winner Arrogate (1:59.36) skipped the Haskell and enters off a victory in New York, so there are historical angles in his favor. He didn’t compete in the Triple Crown, so Artorius is a true up-and-comer who figures to be overlooked in the betting. History suggests we shouldn’t be surprised if Artorius springs an upset at double-digit odds.

Good luck with your handicapping and enjoy the Travers!