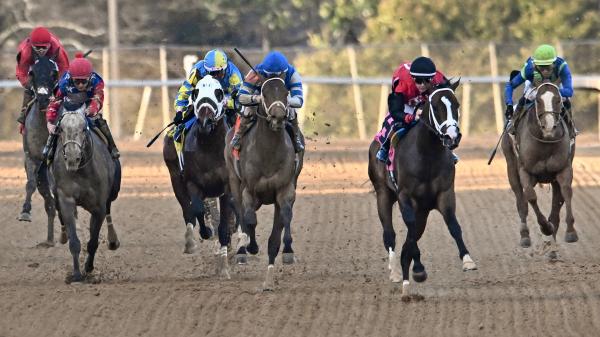 Victory Formation is continuing to live up to his name.

The Tapwrit colt won the third straight race to start his career, ringing in the new year with a no-doubt-about-it, gate-to-wire win in the one-mile, $250,000 Smarty Jones Stakes for 3-year-olds at Oaklawn Park Jan. 1.

Breaking from post 8, Victory Formation and jockey Flavien Prat wasted no time moving to the front. Racing just along the outside of longshot Western Ghent, Prat crossed in front of that foe to the rail.

“I just wanted a good break and get myself into position,” Prat told FanDuel TV. “He had really good gate speed and I got on the lead, but it didn’t really matter (being first or second at the first turn) at that point.”

Western Ghent hung tough, holding second until just before the stretch. Meanwhile, Angel of Empire, who had been as far back as six lengths after a quarter-mile, worked along the rail. Jockey Joe Talamo worked to try to close the gap Prat and Victory Formation had put between them. However, the winner was too strong.

Victory Formation won by three lengths, finishing the mile in 1:38.14 as the 3-5 betting favorite.

Angel of Empire was clearly second best. A late rally from Denington allowed him to edge Western Ghent by a half-length for third but still three lengths behind the runner-up.

Victory Formation won a maiden special weight race held at 6 ½ furlongs at Keeneland in October by 4 ¾ lengths, followed by a win in a six-furlong allowance optional claiming race at Churchill Downs in November where he lost the lead in midstretch but fought back to prevail by a neck.

“He’s a nice horse. This horse has a great mind,” Cox remarked about Victory Formation when speaking with Oaklawn’s press department. “He doesn’t overdo it in the morning. He settles and I think the farther the better. He’s got a lot of natural speed. He’s able to put himself in good position and he was able to turn off and settle and finish up with good strides there.

“The breeding suggested he would go long. You never really know (go two turns) until they do it. He has to confirm it. We have opinions, horses have the answers. He gave us the right answer today.”

The top five finishers earned points toward qualifying for the Kentucky Derby Presented by Woodford Reserve on a 10-4-3-2-1 basis. Following the Smarty Jones, Victory Formation’s 10 points place him sixth in the Road to the Kentucky Derby leaderboard.