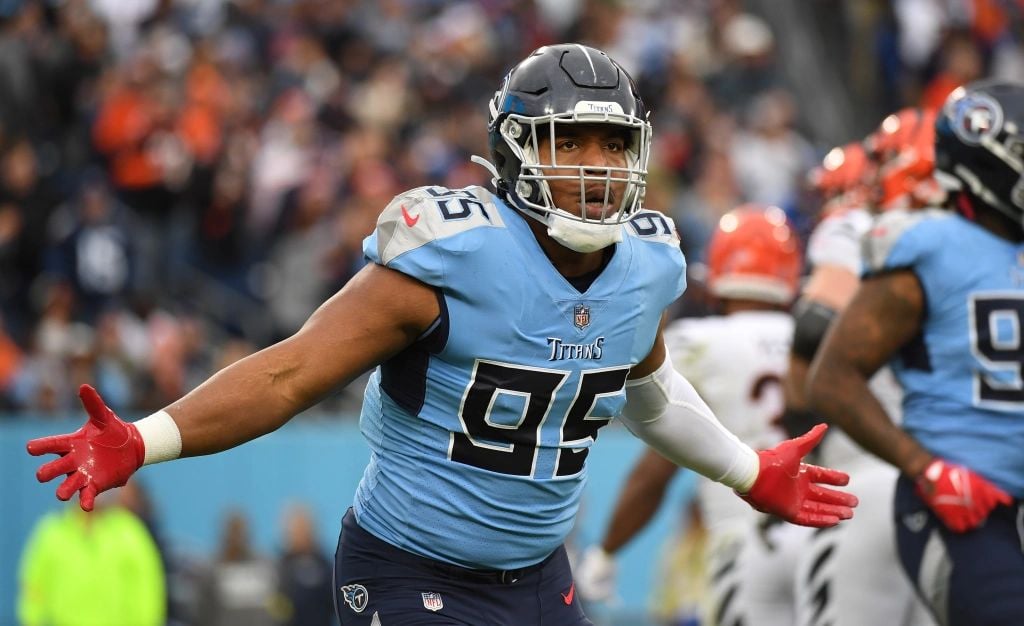 NFL Sunday’s Week 13 games will feature a matchup between the Philadelphia Eagles and the Tennessee Titans. This promises to be an exciting game, with both coming in as strong leaders in their respective divisions.

Tennessee Titans defensive lineman DeMarcus Walker on the field during the team’s game against the Cincinatti Bengals. The Titans face the Philadelphia Eagles in Week 13 as they look to continue improving. (Image: USA Today)

The Eagles are at the top of the NFC East with a league-leading 10-1 record. The Titans, despite a few slips, are commanding all of the AFC South with the division’s only winning record (7-4).

Both teams are playoff bound, but there are plenty of other teams still fighting for the postseason. The LA Chargers are on that list, and need a win against the Las Vegas Raiders today to keep their hopes alive.

This has been the season of growth for Eagles QB Jalen Hurts, who has given an outstanding performance on the ground, as well in the air. He knows how to play inside the pocket and has not made many mistakes. So far this year, he’s completed 67.3% of his passes for 2,560 yards, adding 17 touchdowns and just three interceptions.

Although the Eagles enter today’s game following a 40-33 win over the Green Bay Packers, they had a tight game due to several turnovers. Each one gave the Pack renewed hope that had Green Bay knocking on the Eagles’ door.

They can’t afford to make any mistakes tonight, and those turnovers may have helped, not hurt, Philly. They gave the team a chance to work under pressure, a key component for the rest of the season.

The Titans had a painful setback at home through a loss to the Cincinnati Bengals. They had problems establishing even a minimal ground attack, and will have to make adjustments so that running back Derrick Henry can continue to work his magic.

The Eagles’ run defense has allowed 525 yards (131.5 per game) across their last four games, putting them in 23rd place in that span. That’s not going to hold up if Henry, who ranks second in rushing yards (1,048), takes charge.

These two don’t meet often, only every four years across conference lines. However, the Eagles have repeatedly kept the Titans under control, taking seven out of the previous 12 contests.

The over/under is a fair representation of what the Eagles and Titans can do. While the Eagles should be able to pick up another win, both teams will likely run up the score.

The Chargers are coming off a win last week that allowed them to improve to 6-5. They’re now 2-2 against teams in the same division, while on the road, like today against the Raiders, they are 4-2.

The Raiders have picked up two consecutive wins, but they’re not having a great season overall. They’re 4-7 and just 2-2 at home.

The Chargers need to step it up on both offense and defense today. The offense has been a mixed bag of tricks, while the defense is routinely ineffective. Linebackers Kenneth Murray and Drue Tranquill have not proven themselves capable of stopping the run, which the Raiders will look to exploit.

The Chargers offense showed signs of being a world-class team last week in their two-minute drill against the Arizona Cardinals. They came from behind to win by a point and need to use that to fuel their game today.

These two have met 126 times, including one postseason game. The Silver and Black (the Oakland version, the Los Angeles version and the new Las Vegas version) have 67 wins, with the Chargers taking the rest.

However, the Chargers have taken three of the last five. One was in Week 1, but some argue that the Raiders only lost because of QB Derek Carr’s three interceptions.

It’s now time for redemption, and the sportsbooks think so, as well. The Chargers are facing an uphill battle that likely won’t end well.

With limited exception, these two regularly put up 20 or 30 points per game. That’s possible again today, which is why the over/under is over the top of what sportsbooks have been offering on most games. Still, even at 49, it’s reachable today.