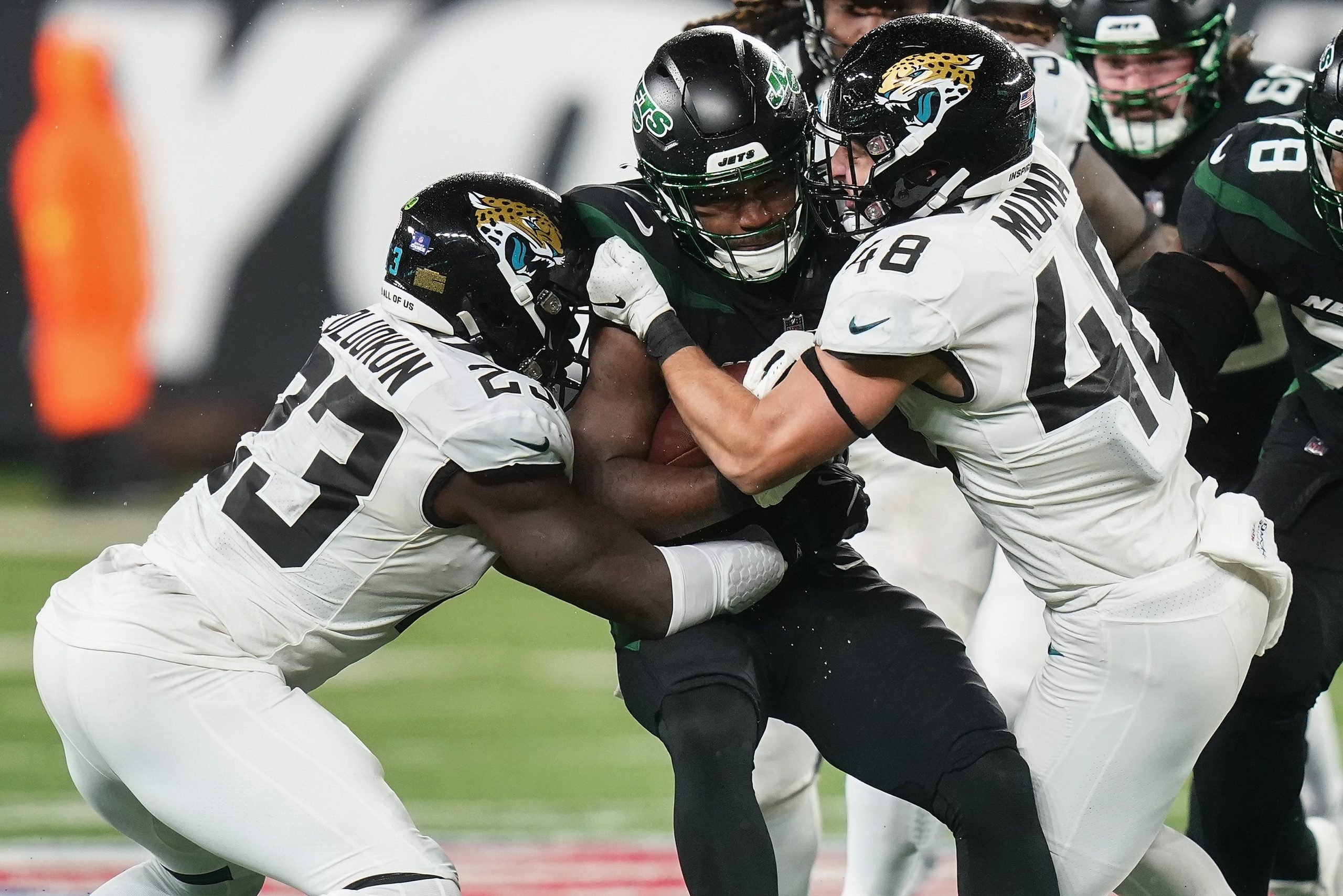 The Jacksonville Jaguars kept their postseason possibilities alive following a win in their Thursday Night Football clash with the New York Jets. However, if they have any real aspirations of making a deep run, they can’t continue to play like they did.

New York Jets running back Zonovan Knight (27) is tackled during the third quarter of the team’s Thursday Night Football game against the Jacksonville Jaguars. The Jags emerged victorious, but not because of a stellar performance. (Image: Associated Press)

The Jaguars remain in the fight to reach the playoffs with their 19-3 win over the Jets as Week 16 of the NFL season got underway Thursday night. It wasn’t a pretty win, and both sidelines had a lot of difficulty developing a solid cadence.

The Jags fumbled the ball on the first possession, which the Jets converted for three off a field goal. However, they would never see the end zone again for the rest of what was a lackluster and error-prone 60 minutes of football.

Jags Find A Way To Hang On

The victory allows the Jaguars to hold onto second place in the AFC South, with seven wins and eight losses. It’s a shot at the postseason and a run on the division-leading Tennessee Titans.

The Jets, however, are last in the AFC East with a 7-8 record. That definitively keeps them out of postseason range, but it’s still better than their 4-13 and 2-14 records from the two previous seasons.

QB Trevor Lawrence gave a decent performance for the Jags, putting up 229 passing and 51 rushing yards, as well as scoring the team’s only TD. However, overall, the 2021 first overall draft pick continues to have difficulty proving why he was once a Heisman Trophy finalist. While the offense got the job done, there are holes that need to be filled quickly.

Zach Wilson’s stats in back to back games against the Lions and Jaguars, two of the worst defenses in the NFL:

The Jets still can’t find a QB capable of leading the team. Zach Wilson, the number-two pick in the 2021 draft, was all over the place – 77 yards in one game, 355 in another – and had to be benched in favor of Chris Streveler after putting up 92 yards and an INT.

Streveler didn’t provide any relief. He only managed to add 90 yards, but, on the bright side, he completed 66% of his passes.

In the first quarter of the game, the defenses were in control. That early Jacksonville turnover may have spooked the team, but the defense stepped up to take care of business.

The Jaguars’ offense improved in the second quarter. After some initial struggles, they went for 96 yards on a drive that culminated in Lawrence’s score to move ahead 10-3. However, nothing seemed to be working right on offense.

The Jets showed one thing last night, though. The defense was a well-oiled machine that continued to find ways to keep the Jaguars from any real success. The offense’s lack of rhythm meant the defense stayed on the field the most, but they played through the exhaustion to keep the Jags out of the end zone.

Jacksonville could only muster two more field goals the rest of the game – one in the third quarter and the other in the fourth. If the Jags want anything better than an early exit in the NFL postseason, they’re going to have to play a lot smarter.

The Jags were the underdogs in the sportsbooks’ minds last night, although the lines were extremely tight. What was a bigger shock was the total, which should have been much higher.

The over has been successful for both of these teams. However, even though the over/under was low at about 37, they didn’t come anywhere close to that.