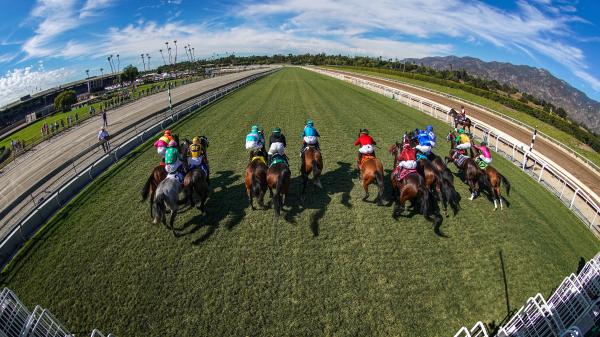 Where to Watch/Listen: 2022 Holiday Break and Day After Christmas Bonanza

As happens annually, horse racing in North America will go “dark” for one day on the calendar as all involved in the sport, from owners to everyday bettors and fans, celebrate Christmas on Sunday, Dec. 25. Most tracks will not conduct racing on Christmas Eve, Saturday, Dec. 24 as well, with Gulfstream Park and Tampa Bay Downs being notable exceptions.

On Monday, Dec. 26, however, the action picks back up with a fantastic slate of racing highlighted with the launch of two elite meets, one on each coast. Gulfstream kicks off its Championship Meet in south Florida with a couple of stakes races, while in Arcadia, Calif., Santa Anita Park holds opening day of its Classic Meet featuring six graded stakes: three Grade 1s and three Grade 2s.

Racing from both Santa Anita and Gulfstream will be showcased on FanDuel TV, along with coverage of other tracks including Fair Grounds. That New Orleans track will host nine stakes races on Dec. 26, including the first of its four preps for the 2023 Kentucky Derby Presented by Woodford Reserve, the Gun Runner Stakes.

The NYRA-produced “America’s Day at the Races” will take the upcoming week off along with Aqueduct Racetrack and resume its show schedule on Friday, Dec. 30.

America’s Best Racing presents enhanced coverage of Santa Anita Park’s spectacular Dec. 26 opening-day card with a don’t-miss livestream. Monday afternoon, join America’s Best Racing as we kick off Santa Anita’s Classic Meet with “Boxing Day Bets” streaming coverage of all the action from The Great Race Place, hosted by Dan Tordjman and Ashley Mailloux. Santa Anita’s special Boxing Day card is loaded with six graded stakes highlighted by the Runhappy Malibu Stakes. You can chat live with the show hosts and ask questions about the races to the experts that’ll join in on the show, including Mike Somich (The Racing Dudes), Scotty McKeever (EquineEdge) and Ryan Flanders (Trip Note Pros).

Here’s a rundown of TV, radio, and livestreaming coverage of the upcoming horse racing calendar: