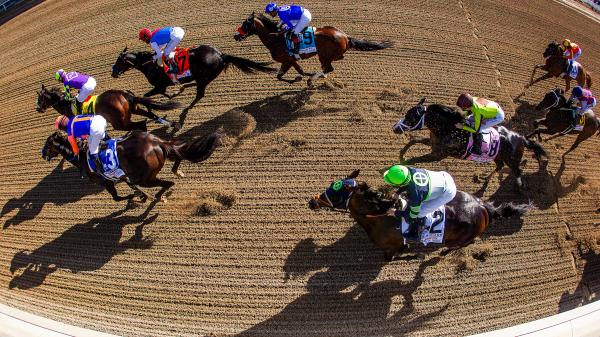 Where to Watch/Listen: Derby Preps in New York, Kentucky, and California

All three races will be televised during an hour-and-a-half show on NBC, wrapping up the network’s “Road to the Kentucky Derby” series this winter and spring. The show begins at 4:30 p.m. ET and will feature reporting, analysis, and handicapping from NBC Sports’ award-winning team.

The Wood, Blue Grass, and Santa Anita Derby will also be shown live on TVG as part of that network’s comprehensive coverage.

TVG is the go-to network for in-depth coverage of the Keeneland April meet as well. That meet begins Friday, April 8 and runs through Friday, April 29. Each day of live racing, TVG will produce “Today at Keeneland.” The 30-minute preview show includes handicapping picks and discussion of horses of interest. Racing analysts Gabby Gaudet and Scott Hazelton host the program, which airs live at 11:30 a.m. ET every race day on TVG2, Keeneland.com, Keeneland Select, and Keeneland’s YouTube channel.

Racing from Aqueduct and Oaklawn Park is showcased on “America’s Day at the Races.” The NYRA-produced show airs from Thursday to Sunday on FS2 and FS1 – check the schedule below..

A highlight of livestreaming broadcasts for Derby prep week is ABR’s “Santa Anita: Road to the Derby LIVE!” show Saturday, April 9 beginning at 5:30 p.m. ET. Hosts Joey Mulinaro and Dan Tordjman anchor this special Runhappy Santa Anita Derby edition of “Road to the Derby LIVE!” directly from Santa Anita Park. They’ll be joined by surprise guests and handicappers and have live analysis right up until post time for the big race.

The popular “La Trifecta” returns this Thursday, April 7 at 8 p.m. ET for a new show. Presented en Español, “La Trifecta” is hosted by Darwin Vizcaya, Claudia Spadaro, and Annise Montplaisir. This week’s show will be broadcast on ABR’s Facebook, Twitter and YouTube channels.