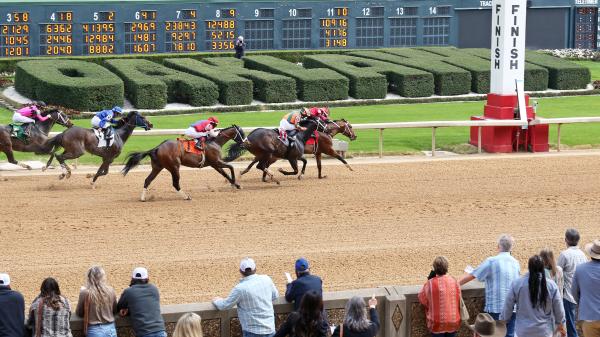 Where to Watch/Listen: Horse Racing Coverage for Feb. 23-27

The marquee event on the Road to the 2022 Kentucky Derby Presented by Woodford Reserve lands in Hot Springs, Ark., this Saturday, Feb. 26 for a major prep race at Oaklawn Park, the $1 million Rebel Stakes. The Rebel offers qualifying points to Derby 148 on a 50-20-10-5 distribution to the top four finishers.

In addition, Fox Sports will provide live coverage on FS2 of the $20 million Saudi Cup Saturday from King Abdulaziz Racecourse in Riyadh. The race is expected to draw U.S.-based stars Mandaloun and Midnight Bourbon.

The Rebel and the Saudi Cup will also be shown on TVG as part of their usual comprehensive coverage.

For livestreaming coverage, don’t miss ABR’s new show “Devine and the Dog” airing Wednesday, Feb. 23 at 6 p.m. ET. Hosted by racing analyst Megan Devine and horseplayer and raconteur Chase Sessoms, aka “The Wolf of Oaklawn,” “Devine and the Dog” can be streamed on ABR’s Facebook, Twitter, and YouTube channels.

The popular “La Trifecta” returns this Thursday, Feb. 24 at 8 p.m. ET for a new show. Presented en Espanol, the show is hosted by Darwin Vizcaya, Claudia Spadaro, and Annise Montplaisir. This week’s show will be broadcast at 8 p.m. ET on ABR’s Facebook, Twitter, and YouTube channels.