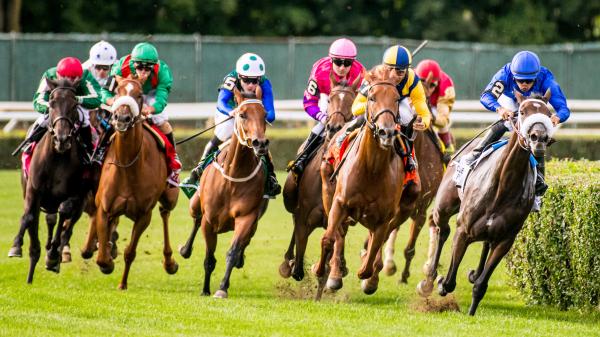 Where to Watch/Listen: Horse Racing Coverage for July 8-10

After a jam-packed Independence Day holiday weekend of horse racing, the activity keeps humming during the second weekend of July, highlighted by the end of Belmont Park’s spring-summer meet and some big races in the Midwest.

Belmont finishes up on Sunday, July 10, and on Saturday, July 9 the track will host four graded stakes, highlighted by two Grade 1s on turf for 3-year-olds: the Caesars Belmont Derby Invitational and the Belmont Oaks Invitational.

Racing from Belmont from Friday to Sunday will be showcased on “America’s Day at the Races.” The NYRA-produced show airs on FS2 over the weekend, including a Saturday night bloc featuring harness racing from the Meadowlands and Thoroughbred racing from Canterbury Park. The afternoon coverage Saturday will also show races from Horseshoe Indianapolis, including the Indiana Derby.

After wrapping up at Belmont Park, the NYRA team moves upstate to historic Saratoga Race Course, and will debut the 2022 edition of “Saratoga Live” on opening day, July 14, followed by daily coverage throughout the meet ending on Labor Day.

Racing from Gulfstream Park, Delaware Park, Monmouth Park, Woodbine, and other tracks will be shown on TVG as part of their comprehensive coverage. TVG will show stakes races Saturday evening from Prairie Meadows, including the Iowa Derby.

Here’s a guide to this week’s television and radio coverage.