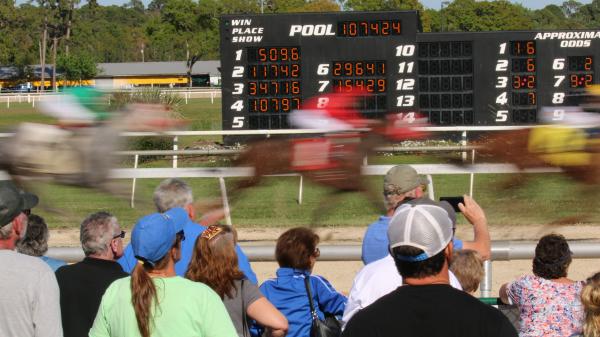 Where to Watch/Listen: Horse Racing Coverage for March 9-13

The road to the 2022 Kentucky Derby Presented by Woodford Reserve stops in west-central Florida this Saturday, March 12, for the Lambholm South Tampa Bay Derby at Tampa Bay Downs. The $400,000 race is the weekend’s highlight event on the North American calendar and offers a total of 85 qualifying points for Derby 148 to the top four finishers. It’s part of a jam-packed card at the Oldsmar, Fla., track featuring four other stakes races.

The Tampa Bay Derby plus other races from Tampa Bay Downs, Aqueduct, and Oaklawn Park will be televised live on “America’s Day at the Races.” The NYRA-produced show airs from Friday to Sunday on FS2 and FS1 – check the schedule below.

TVG will also show the Tampa Bay Derby as part of their usual comprehensive racing package that includes racing from Gulfstream Park, Santa Anita Park, and many other tracks.

For livestream content, on Wednesday, March 9, ABR’s new show “Devine and the Dog” is back beginning at 6 p.m. ET. Hosted by racing analyst Megan Devine and horseplayer and raconteur Chase Sessoms, aka “The Wolf of Oaklawn,” “Devine and the Dog” can be streamed on ABR’s Facebook, Twitter, and YouTube channels.

The popular “La Trifecta” returns this Thursday, March 10 at 8 p.m. ET for a new show. Presented en Espanol, the show is hosted by Darwin Vizcaya, Claudia Spadaro, and Annise Montplaisir. This week’s show will be broadcast on ABR’s Facebook, Twitter, and YouTube channels.