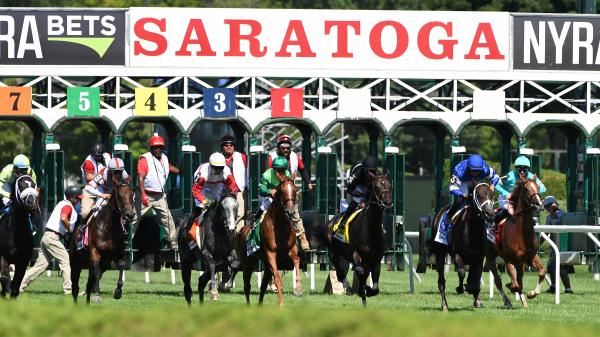 Where to Watch/Listen: Saratoga Opening Week 2022

This week marks one of the annual high points of the racing calendar, the payoff to weeks if not months of anticipation for hardcore racing fans: the opening of Saratoga Race Course’s summer meet.

The 40-day meet, which runs through Labor Day, attracts the best horses, trainers, and jockeys in North America for intense competition, featuring historic stakes races, six Breeders’ Cup “Win and You’re In” races, and perhaps most exciting, a slew of maiden races for emerging 2-year-olds. Click here for a meet preview and check out ABR’s Saratoga gambling guide for tips to win at the windows.

Saratoga is showcased on the NYRA-produced “Saratoga Live,” which airs every day during the meet. The show runs from the meet opener on Thursday, July 14, through Sunday, July 17, this week on FS2 and FS1 – check the below schedule for air times. An additional show will air Saturday evening, July 16, showing harness racing from the Meadowlands and Thoroughbred racing from Canterbury Park.

Racing from Gulfstream Park, Monmouth Park, Woodbine, Laurel Park, and other tracks will air on TVG as part of their comprehensive package.

With the kickoff of the Saratoga meet, ABR’s livestreaming content ramps back up this week as well. The popular “La Trifecta” returns Thursday evening, July 14, at 8 p.m. ET with a Saratoga preview. Presented en Español, “La Trifecta” is hosted by Darwin Vizcaya, Claudia Spadaro, and Annise Montplaisir. This week’s show will be broadcast on ABR’s Facebook, Twitter and YouTube channels.

And don’t miss the season premiere of “Saratoga Saturdays” at 9 a.m. ET July 16. Presented by NYRA Bets, the show is hosted by Jonathon Kinchen and Anita Marks and will preview the Saturday card at the spa. As its name confirms, “Saratoga Saturdays” runs each Saturday during the meet and is available on ABR’s Facebook, Twitter, and YouTube channels as well as Jonathon’s Twitter account and Anita’s Twitter account.

Here’s this week’s guide to television, livestreaming and radio coverage: