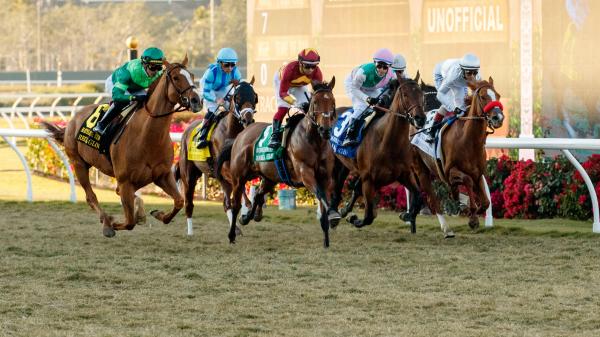 Which Contenders Can Foil Regal Glory’s Repeat Bid in the Matriarch Stakes?

The $400,000, Grade 1 Matriarch Stakes Dec. 4 is the closing-day marquee event for Del Mar’s Bing Crosby meet before the Southern California circuit shifts briefly to several days of dirt-only racing at Los Alamitos and then picks up momentum again in late December at Santa Anita Park.

That classy mare is angling for a repeat victory in Sunday’s race. Regal Glory (#6) has amassed a sterling career record of 12 wins and six seconds through 22 career starts, those coming at eight tracks including her ship-in-and-win tally last fall that gave trainer Chad Brown his fourth Matriarch win in five years. She led throughout in that race and was not challenged in a 2 ½-length victory, but this daughter of the great Animal Kingdom is very versatile: all three of her wins in 2022 have come from off of the pace. A three-time Grade 1 winner, she enters the Matriarch off of a subpar 10th-of-14 finish in the FanDuel Breeders’ Cup Mile Presented by PDJF, but that came against a top-quality international field, 11 of them males. Six-year-old Regal Glory is a deserving favorite to win the Matriarch again at what should be a short price.

Regal Glory is one of four fillies and mares arriving from points east for the Matriarch, along with stablemate Dolce Zel (#9), a two-time Grade 3 winner; Bill Mott-trained Grade 2 winner Wakanaka (#7), who won a listed stakes at Keeneland last out; and Pizza Bianca (#8). That filly has already proven her affinity for Del Mar’s course, rallying from last like a lightning bolt to win the 2021 Breeders’ Cup Juvenile Fillies Turf for owner Bobby Flay and trainer Christophe Clement. One other filly, Graham Motion-trained Bipartisanship (#1), has spent most of her career since coming to the U.S. competing on the East Coast, but she traveled to Del Mar just over three weeks ago and won a listed stakes by a length.

Of that group, I rate Wakanaka as having the best chance of upsetting Regal Glory in the Matriarch as she’s been keeping very good company in 2022 and holding her own for the most part. She also retains the services of jockey Joel Rosario, who was aboard for both her recent Keeneland win and her runner-up finish to Regal Glory in the Grade 1 Longines Just A Game Stakes back in June at Belmont Park.

There are also five Southern California-based runners to consider. They’ve all been knocking heads with one another at Del Mar and Santa Anita, mainly in listed stakes or at the Grade 2 or 3 level. Hamwood Flier (#5) is the probable pacesetter in the Matriarch and comes into the race off of a front-running score in a one-mile listed race on turf at Santa Anita in October. The most intriguing local runner is Avenue de France (#10). This 5-year-old mare trained by Leonard Powell disappointed in her last start when fifth of six in the Grade 2 Goldikova Stakes Oct. 29 at Santa Anita but prior to that had won three out of five races. Two of those were in stakes at Del Mar – the listed Osunitas Stakes in July and more recently the Grade 2 John C. Mabee Stakes in September. Juan Hernandez was aboard for both of those victories; the rising star leads Del Mar’s jockey colony in wins for the Bing Crosby meet and will ride Avenue de France Sunday.

For betting purposes, I’ll box Regal Glory, Wakanaka, and Avenue de France in an exacta and play another exacta for a larger base amount with Regal Glory besting the other two. Regal Glory should get a favorable trip under Flavien Prat stalking pacesetter Hamwood Flier after that one breaks just inside her from the starting gate, and I think she should be able to hold off rallies from Wakanaka and Avenue de France in the closing stages.

Betting strategy on a $25 budget: