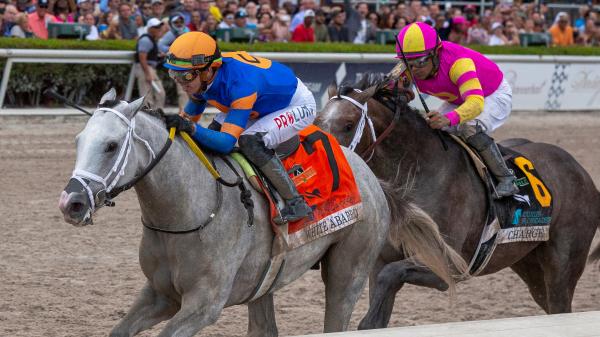 White Abarrio did more than give trainer Saffie Joseph Jr. an April 2 victory in the $1 million Curlin Florida Derby Presented by Hill ‘n’ Dale at Xalapa Farms and a likely start in the Kentucky Derby Presented by Woodford Reserve.

The 3-year-old gray/roan son of Race Day also helped validate Joseph picking up his life and career and moving to the United States in 2011.

“When I said I wanted to move here, my dad said I was crazy because I had been training the best horses in Barbados,” an emotional Joseph said. “But he backed me and supported me.

That determination by father and son has led to increased success in recent years, capped by White Abarrio overtaking Simplification in the stretch and holding off Charge It by 1 ¼ lengths to capture the Florida Derby at Gulfstream Park.

Charge It, under Luis Saez, finished second by a length to earn 40 points, good for 15th on the leaderboard. Simplification, the 2.30-1 favorite and winner of the March 5 Fasig-Tipton Fountain of Youth Stakes at Gulfstream, took third and picked up 20 points with jockey Jose Ortiz. He ranks sixth on the leaderboard with 64 points in all.

Classic Causeway set fractions of :23.67 and :47.24 before Simplification moved ahead soon after the half-mile.

Simplification remained in front turning for home, but White Abarrio was mounting his challenge, and secured the lead passing the eighth pole.

Whisper Hill Farm’s Charge It, running greenly, made a late rally, but White Abarrio held his advantage, posting a winning time of 1:50.64 for the 1 1/8 miles on a fast track.

“I planned on being a little more forwardly placed,” winning jockey Tyler Gaffalione said. “I thought Classic Causeway and Charge It would be the two on the lead and I thought we would be able to stalk them. But Jose (and Simplification) and Pappacap were pretty aggressive and I didn’t want to get caught too wide, so I took back to save some ground.”

Charge It entered the Florida Derby having been lightly raced. He was first and second in two career starts, both allowance races at Gulfstream.

“Super pleased with the effort,” trainer Todd Pletcher said of the colt. “To get a real education in a race like that was very encouraging. He got a little green down the lane. He kind of drifted in behind (White Abarrio) and felt like if he could have just run straight that last 100 yards, he was going to be right there.”

“I’m so happy today,” trainer Antonio Sano said of the son of Not This Time. “We made the decision to run near the front today because (Classic Causeway) was speed and (Pappacap) all the time is behind me.”

Pappacap finished fourth to earn 10 Kentucky Derby points, increasing his total to 24, good for 19th on the leaderboard.

“Irad said he thought he was traveling until about halfway down the backside and then he just sort of ran out of horse,” trainer Brian Lynch said. “So, we’ll do some investigating, but he looked sound. We’ll regroup.”

White Abarrio did not run in the Fountain of Youth following his Holy Bull win, which came after two missed works due to a fever having run through Joseph’s barn.

The trainer said there also had been a “hiccup” before the Florida Derby, as the horse ran a temperature 12 days before the race.

“You wake up to that text at 3:45 in the morning, it’s the worst thing you want to see because I was like not again,” Joseph said. “Thankfully, he was able to fight it off. By Friday, his blood work started coming back to the point that we thought we were going to be fine.”

He, and the connections, certainly were.–Charlie McCarthy

Odds told contrasting tales in the $250,000 Gulfstream Park Oaks earlier on the April 2 card at Gulfstream.

Realistically, what are the odds of having a one-horse stable, and also having a 3-year-old filly good enough to be one of the favorites for a top race such as the Longines Kentucky Oaks?

Before anyone takes out a calculator, rest assured they are astronomically higher than the 1-2 odds and the $3 winning payoff for Kathleen O. in the Gulfstream Park Oaks.

Yet those were indeed the odds that framed the victory as the daughter of Upstart improved her perfect record to 4-for-4 with a 2 ¾-length victory over Goddess of Fire at Gulfstream. That win will propel the lone horse in training owned by octogenarian Patrick Kearney of Winngate Stables into the May 6 Kentucky Oaks on a note as high as the twin spires at Churchill Downs.

“This is kind of a miracle,” trainer Shug McGaughey said. “(Kearney) gets one horse and it’s this one. If he doesn’t have any more fun, which he will, you know he’s had a lot of fun already.”

The “fun” will move to Churchill Downs next month where the late-running style of the undefeated Kathleen O. should be well-suited for the 1 1/8-mile distance of the Kentucky Oaks, a race McGaughey won for the first and only time, to date, in his Hall of Fame career back in 1993 with Dispute.

“The Kentucky Oaks is a big spot for me. I really like it. I won it one time,” McGaughey said. “I don’t remember the thrill and I’d like to have it again.”

Kathleen O. picked up 100 qualifying points for the Kentucky Oaks through Saturday’s win, though she was already safely in the 14-horse field thanks to the 50 points she secured in winning the March 5 Davona Dale Stakes Presented by FanDuel at Gulfstream, where she has posted her last three wins, all stakes company, with impressive rallies from the back of the field.

A field of six 3-year-old fillies contested the Gulfstream Park Oaks, but it was basically a two-filly race. Red Oak Stable’s Goddess of Fire, second choice at 8-5, forged to the front on the final turn with Kathleen O. rallying outside of her, and the two favorites slugged it out to the wire with the others far behind.

Goddess of Fire held a short lead near the quarter pole after running six furlongs in 1:12.50, but could not fend off Kathleen O. and jockey Javier Castellano who grabbed the lead approaching the eighth pole and pulled away in the final furlong to cover the 1 1/16 miles in 1:43.75.

“I think she wants to run a distance of ground,” McGaughey said. “She’s by Upstart who is by Flatter. She’s out of a (Blame) mare. That was one of the things that attracted me to her, when I saw her pedigree. She does everything right and does it pretty easy.”

Out of Quaver by Blame, Kathleen O. was bred by Gainesway Thoroughbreds and Bridlewood Farm in Kentucky and was purchased by McGaughey on behalf of Kearney for $275,000 from the Niall Brennan Stables consignment at the OBS Spring Sale of 2-Year-Olds in Training.–Bob Ehalt