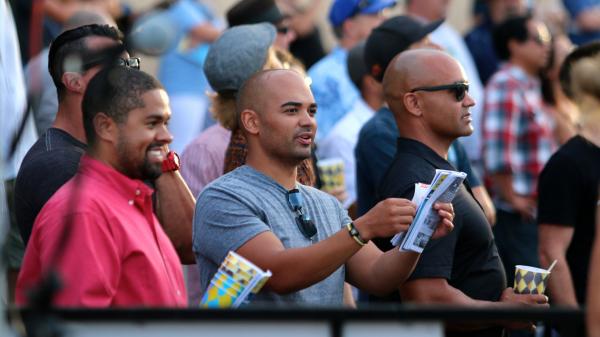 Why Messier Could Glide to Victory in Bob Hope Stakes

Hall of Fame trainer Bob Baffert has three of the five starters for the $100,000 Bob Hope Stakes Sunday at Del Mar, a race he has won 10 times previously and has a very good chance to win again in 2021.

Previously called the Hollywood Prevue, the Grade 3 race was renamed in honor of the legendary comedian and horse racing aficionado after Hollywood Park closed and the race was moved to its new seaside home at Del Mar in 2014.

Baffert’s trio for 2021 occupy the three inside post positions: #1 Messier, #2 Kamui, and #3 Winning Map. Messier is named after pro hockey Hall of Famer Mark Messier and with his horses breaking from three consecutive posts, it’s almost as if Baffert is sending out a hockey line.

The other entrants are #4 Rock N Rye, a 4 ½-length winner of the Graduation Stakes at Del Mar in August stepping out of state-bred competition for the first time; and #5 Forbidden Kingdom, an American Pharoah colt trained by Hall of Famer Richard Mandella who won his debut on the main track at Del Mar in August before finishing a troubled third in a stakes race on the grass in October.

Returning to the main track for Mandella, who has enjoyed success when teaming with jockey Juan J. Hernandez, Forbidden Kingdom looks like a major player to me. He has a win on this racetrack and has been training well.

The seven-eighths of a mile can be a bit tricky for 2-year-olds stretching out in distance for the first time, as is the case in this race. While it still is a one-turn race, the extra eighth of a mile or three-sixteenths of a mile can sometime catch up to speed horses.

Winning Map was dazzling in his debut for Baffert when he led every step of the way going three-quarters of a mile Oct. 3 at Santa Anita Park after setting a strong pace. The 98 Equibase Speed Figure he earned for that win is three points higher than the best any other runner has recorded, so the Liam’s Map colt profiles as the logical favorite.

I opted for a different Baffert runner for the win in Messier, who won from just off the pace Oct. 22 at Santa Anita at the same three-quarter-mile distance. An Empire Maker colt from a very nice family cultivated by prominent Canadian breeder Sam-Son Farms, Messier should relish the extra distance and he has the versatility to rate off the pace as well as the natural speed to press the action if the situation calls for it.

I really liked his last race – specifically the push-button acceleration he showed – and how he came out of that 6 ½-length win, which earned a 95 Equibase Speed Figure. He was back with a timed workout 10 days later and then followed with a very nice workout Nov. 8.

Additionally, Baffert and jockey Flavien Prat form a potent tandem, clicking at a 41% win rate from 54 starters in 2021 according to Equineline data. Baffert and Winning Map’s rider, Hall of Famer Mike Smith, also have enjoyed terrific success together, but it’s worth noting Baffert and Prat win at a similar percentage. Messier will also race without blinkers in the Bob Hope, an angle Baffert has had success with over the past year (over 30 percent winners).

It’s tough to predict the odds in a five-horse field that figures to offer very little in the way of value, so I’ll just try to hammer an exacta using Messier over Forbidden Kingdom.

Exacta Strategy on a $20 Budget