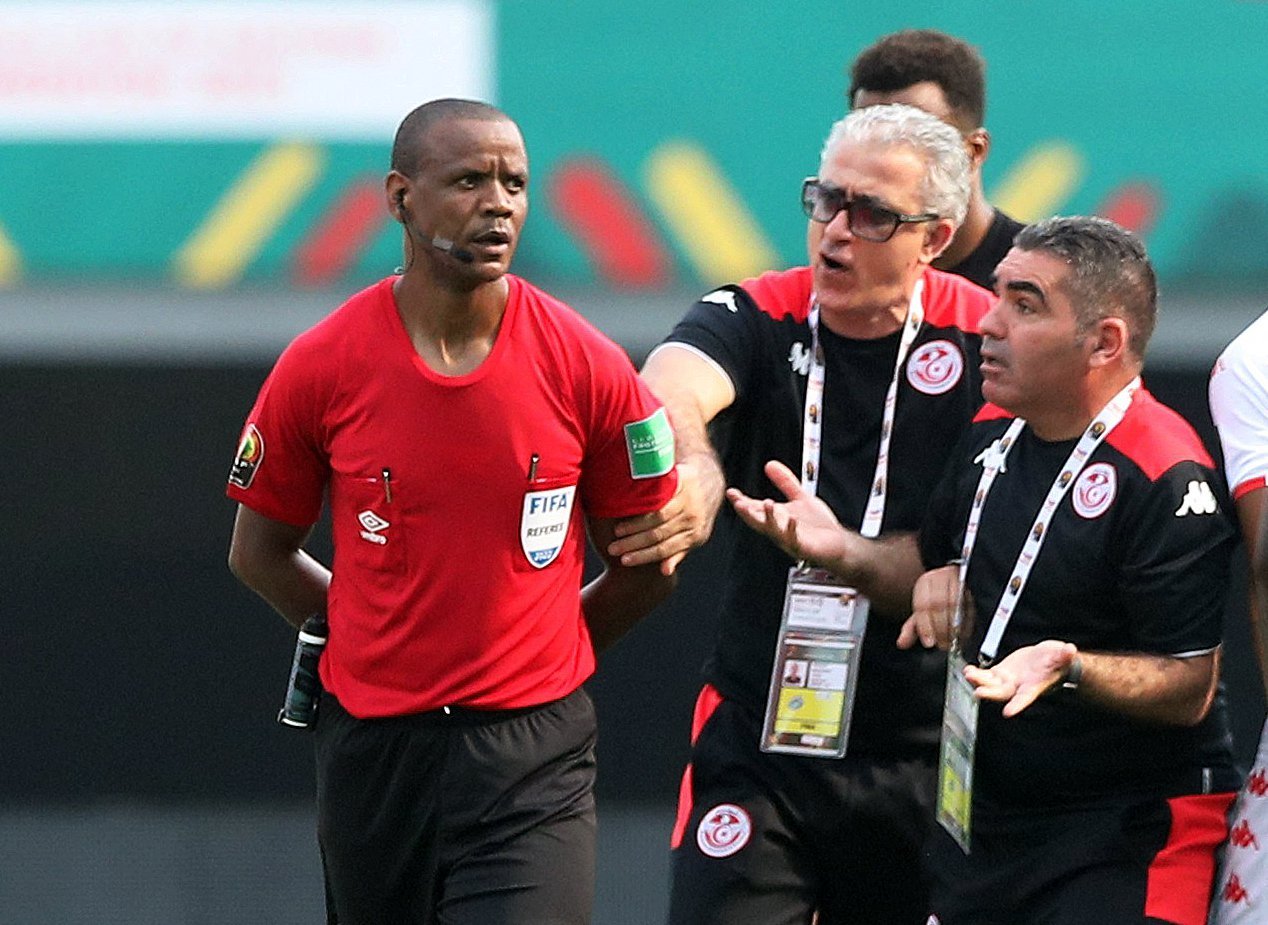 The Africa Cup of Nations (AFCON) game between Tunisia and Mali ended in chaos and confusion Wednesday. That’s after Zambian referee Janny Sikazwe blew his whistle for full time in the 85th minute.

The bizarre and unprecedented incident at the Limbe Stadium in Cameroon sparked protests from Tunisian players, who were trailing 1-0 after a 48th minute Ibrahima Kone penalty.

Apparently realizing his error, Sikazwe restarted the game. Then, in the 87th minute, he sent off Mali’s Bilal Toure. It was a straight red for a relatively innocuous foul.

And then he blew the final whistle again, this time at 89 minutes and 47 seconds.

Cue pitch invasion by Tunisia coach Mondher Kebaier and his technical staff, who surrounded the official gesturing furiously at their watches.

Kebaier said later he had expected at least six minutes of added time beyond the regulation 90, after a second half that had been plagued by stoppages. There were several VAR checks, two penalties (Tunisia missed), and that strange sending-off.

Sikazwe and his fellow match officials were eventually escorted from the pitch by security for their own protection.

But the weirdness didn’t stop there. More than 20 minutes later, players were told to get back on the field to finish the game, this time with a different referee.

Mali players reappeared, but they were told to leave shortly afterwards because Tunisia was refusing to come out.

The stand-in ref then blew the final whistle, awarding Mali the win.

Kebaier said his players had been sitting in post-game ice baths for 20 minutes and were done with the whole shitshow. He says he wants the match to be replayed.

But Was it Match-fixing?

The controversy has once again sparked concern about corruption in international soccer.

Many fans took to social media on Wednesday to speculate that the referee had attempted to end the game early because he had been bribed to let Mali win, maybe by a shadowy gambling syndicate or corrupt Malian officials.

Those voices grew louder when it emerged that Sizaswe was investigated and suspended by FIFA for possible corruption in 2018.

This was because of several dubious decisions in an African Champions League match between Esperance and Primiero Agosto. But he was ultimately exonerated, and the suspension was lifted three months later.

And in this case, the corruption theory doesn’t really stack up.

For a start, there are subtler ways for referees to influence soccer games than by finishing them five minutes early, a tactic that’s guaranteed to grab headlines worldwide.

And if the fix was in for Mali to win the game, why did Sikazwe award Tunisia a penalty and send Toure off?

That red card was dubious. But if it had been pre-ordered by a gambling syndicate, why did it come after Sikazwe had initially tried to end the game with no sendings-off?

And if the two penalties were pre-arranged, why did the referee initially not award them, only to change his mind after intervention from the video assistant referee (VAR)?

Many questions. But in this case, the official explanation appears to be the most plausible.

AFCON officials said Thursday the referee has been treated in the hospital after the game for suspected heatstroke and severe dehydration.

It seems that running around for 89 minutes and 47 seconds in 93-degree heat and 65 per cent humidity in Limbe can do strange things to a man.

2022-01-14
Previous Post: Podcast – European card counter, Stefan
Next Post: Who Are the Most Deserving Poker Personality of the Year Candidates?